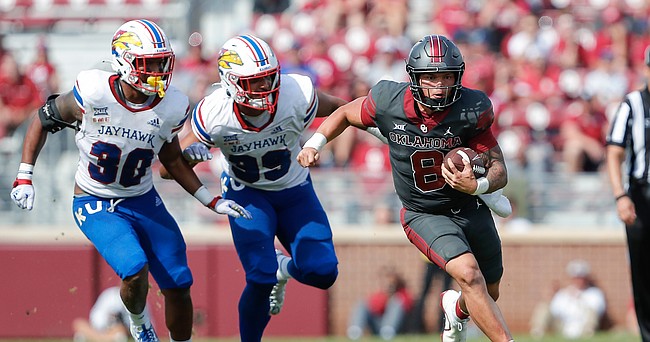 Oklahoma quarterback Dillon Gabriel (8) runs for a first down ahead of Kansas linebacker Rich Miller (30) and defensive lineman Malcolm Lee (99) during the second half of an NCAA college football game Saturday, Oct. 15, 2022, in Norman, Okla. Oklahoma won 52-42. (AP Photo/Alonzo Adams)

After finally cracking the Associated Press Top 25 poll for the first time in 674 weeks after their win over Iowa State, the Kansas Jayhawks’ streak of weeks ranked is over at 2.

That outing, which Kansas nearly won, was impressive enough for the pollsters to keep the Jayhawks right where they were at No. 19 in the poll. But the second consecutive loss was enough for voters to drop them.

KU fell 11 spots into the “others receiving votes” category and essentially will enter Week 8 as the No. 30 team in the nation. KU received 12 points in this week’s voting, which put them 102 points behind No. 25 Tulane.

TCU, which knocked off No. 8 Oklahoma State this weekend in a battle of two of the top teams in the Big 12, jumped up to No. 8 in this week’s poll. The Frogs are the highest ranked member of the Big 12 Conference, which has four teams ranked this week in addition to Kansas receiving votes.

KU’s next opportunity to make a case to jump back into the Top 25 will come Saturday morning when the Jayhawks play at Baylor at 11 a.m. in Waco, Texas.

Welp, it was fun while it lasted. Hopefully KU football won't wait another 13 years before reappearing in the polls...

But, there's still a lot of rebuilding work to be done......

The GREAT thing is, Jayhawks have a HC and Staff who are achieving the desired goals we fans have been desiring for a decade plus......

And I hope fans appreciate that. It would be too easy for the seriously upgraded expectations after 5 wins to make us forget what our pre-season expectations were. Most of us would have been thrilled with 5 wins. I told my wife I would be good with 3 and very happy with 4.

If we had won our 5th in the very last game of the season we'd be ecstatic. But winning 5 at the beginning has boosted my hopes beyond reality. I am very proud of this team and know they will keep on fighting and likely win a couple more games. Then we go bowling!

Hey...We are a scrappy bunch of overachievers and we ran into a very mad hungry football team on their home field and on Homecoming....they were going to come out play hard with all the VIP's there...Venables and co. were especially motivated because there is already lots of pressure on him and the suits were there on Saturday...they came out and were just more ready to play than we were...the loss last week to TCU lingered..and it was visible ...and I think we were surprised how good they were...even though we should not have been...but their 49-0 loss to Texas gave us a false sense of what was going to happen...add all that up and we just got embarrassed ...also the lack of depth is beginning to show itself...we just can't afford to have injuries...Coach says when we get off the bus we don't look like a football team compared to the Big boys...Coach knows..it's going to take a few years to get the depth and material we need to win Titles...I am going to take a deep breath ...because ..it will take time...but the ride is already a lot of fun!

Look at the impact the return of their best QB had on OU's production. Then realize that without Hishaw and Daniels, it would have been nearly impossible for us to perform at the same level that catapulted us to #19. Now, it looks like we've lost the Hawk Mamba, too, at least for awhile. We're not regressing; we're hurting. It's only season 2 (maybe 1.5) of the Leipold era. Even in diminished capacity, the team is surpassing expectations.

Somebody on here, someone that has posted on this very article, said that we are 2 key injuries away from seeing a very different team.

Didn't see the comment (still not seeing it), but yes, I agree with it.

That's it Fire HCLL, burn down the stadium. Send all the team members to the moon.

The return of one of the best QB's in the nation had a lot to do w/it, and let's remember, we did score 42 points. And we were on the road. Run game could be a little better, but we can still win lots of games w/Jason Bean.

We've got some big-time injuries.

But we do have holes on defense. We do get pressure in the backfield, but too many uncovered receivers, just seems like there's no one w/in 5 yards of their receivers. Having said that, to say OU 'rolled' over us, well, I can't get behind that.

We've got the #1 strength of schedule going forward, so will be a tough road. Let's keep selling out the stadium. These guys are giving us something to look forward to on Saturdays for the first time in 13 years.

This reminds of Texas Tech's first few seasons with Mike Leach. They got really good on offense and then improved their defense enough to win consistently. BUt I think Leipold and his staff are better than Leach and his staff.

The bottom line is...we just aren't ready to play BIG BOY FOOTBALL yet....it will take time...Coach might head off to greener pastures and I would not blame him...doubtful that he will ever get the material here to truly compete unless we find a Warren Buffet...to finance about 2 dozen NIL ventures...Nebraska has a Warren Buffet...we don't...Coach should bolt at the end of the year if not before...his stock is going down ...unfairly I might add...he needs to capitalize on this situation now...because the spotlight on him may never be this bright again...once in a lifetime spotlight.....I know I would BOLT...Coach....it's OK if you BOLT...all of us out here would do the same thing...TRUST ME!

What the He11 are you tryin' to do? Just entice our HC to leave already? Come on man! You really think we won't pay LL to stay? You really think we're just gonna let him go? Nebraska Football has sucked ever since they left the Big12. They have sucked ever since they decided to stop playing smash mouth football. They fired Solich for losing 2 or 3 games in a season. It was insane. How many coaches have they been through now? Pelini, Callahan, Frost, Riley and they've all sucked in reality. They fired the coach with the best record since Osbprne in Solich winning 75% of his games. Pelini was over 500 and Callahan was barely above 500. Frost was a complete bust and he seemed to have the best path to the HC position. I'm still shocked he didn't turn them around but they don't play in the Big 8-12 anymore. Things are different. They aren't the big boys anymore. They left thinking they were more than they were and it's cost them dearly. So no if I were LL I wouldn't leave because it's not a guarantee.

Brad - Best not to speak for all of us. Some are loyal and wouldn’t bolt.

The good news is there’s still lots of opportunities for Ws and returning to the polls and bowling.

Last year, we were one of the youngest teams in fbs. We got a lot older via the portal this year, but I think we’ve still got lots of time for development.

With the NIL rules set up like they are...you not only can buy a few star players...you can literally buy the whole team...all you need is some very very deep pockets...that is what it will take to compete...NIL is bad for college football...giving players a decent stipend should have been the course...keeping boosters and gamblers out of college football should always be the goal......now gamblers can own players through NIL and influence them and then before you know it... everything will be fixed just like the NFL...because the gamblers will use the NIL money as leverage over the players to achieve whatever outcome they want on a game....this is very serious people...open your eyes...Yormark is now looking at gambling houses as sponsors for the league? ...to be partners...then what???...WTF ?...Before long the sport will be ruined.... the sport we all love will become All Star Wrestling...just like the NFL! ...TRUST ME...IT'S HAPPENING!