Kansas running back Daniel Hishaw Jr. out an ‘extended period of time’ 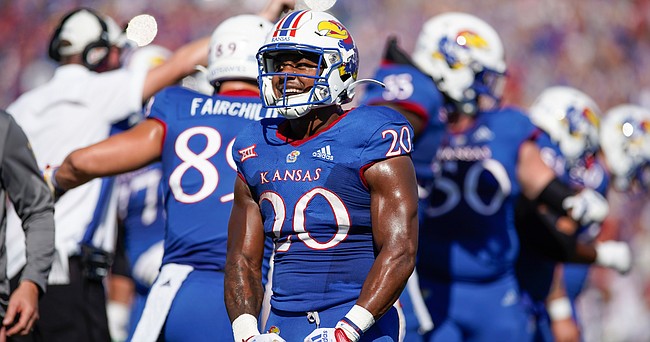 Kansas running back Daniel Hishaw Jr. (20) celebrates after a review confirmed his touchdown during the second quarter on Saturday, Oct. 1, 2022 at Memorial Stadium.

Kansas football coach Lance Leipold said Tuesday that running back Daniel Hishaw Jr. will be out for “an extended period of time” because of an undisclosed injury suffered during KU’s 14-11 win over Iowa State last weekend.

Hishaw left last Saturday’s game on a cart with what appeared to be a lower body injury and he was taken to Lawrence Memorial Hospital for further examination.

Leipold said Tuesday that he made it to the hospital last Saturday night to visit with the KU running back just before he was discharged.

“He was doing a lot better than I could’ve expected,” Leipold said, adding that the redshirt sophomore back was in “decent spirits.”

The speculation on message boards and social media was that Hishaw injured his hip. The third-year sophomore missed all of last season with what he described in August as a “rare” hip injury that happened during preseason camp in 2021.

However, Leipold said the specifics of Hishaw’s injury and a timetable for how long he will be out were not yet available and that he would “let you know more as we move along.”

The 5-foot-10, 210-pound redshirt sophomore from Moore, Oklahoma, was enjoying a breakout season before the injury. After missing all of last season, he appeared in all five of KU’s games so far and was tied for the team lead in rushing touchdowns, with five, and also averaging six yards per carry on 44 attempts.

His powerful running style and ability to impact the game as a receiver gave the Jayhawks an additional weapon to utilize in their offense which has ranked among the most explosive in all of college football so far this season.

“I think his running style and physicality is what separated him,” Leipold said Tuesday.

With Hishaw out, KU will lean more heavily on starter Devin Neal as well as backups Sevion Morrison and Torry Locklin. Neal leads all KU running backs with 333 yards on 49 carries and he also has recorded four rushing touchdowns.

Morrison (110 yards on 12 carries with one touchdown) and Locklin (five yards on three carries) have been used less, but both figure to see more snaps in the weeks ahead with Hishaw out.

Minnesota transfer Ky Thomas also could factor into the equation sooner rather than later. Thomas has missed the past two games with a lower leg injury, but Leipold said the Topeka native was back practicing and would be considered day-to-day.

“Ky’s been practicing more,” Leipold said. “I thought Ky had a good day today. We talked about the depth of that position (all preseason) and we've been utilizing a lot of people offensively. We’ve got to find a way to keep doing that. … “There’s different styles there that all complement each other, and now you’ve got one piece of that group that’s going to be missing unfortunately.”

On this week’s depth chart, Neal was still listed as KU’s starting running back, with Morrison and Thomas listed as his immediate backups.

It sadly sounds like Hishaw won't be back on the field this season. He clearly is a tremendously skilled player and hopefully will be back stronger and faster as soon as possible. What a season he was having as the #2 option at running back. The long catch and run against Duke, and that diving stretch for the goal line in the second quarter against ISU were both indicative of a special talent.

I should say that he had become more than just a #2 option, but really was part of a solid one-two punch

Heartbroken for this kid. Such a beast of a player.

Daniel sounds like a quality young man as well as a football player. It's a pity these things have to happen to him, especially after his marvelous TD run against Duke when he spun around TWO Blue Devil defenders. I hope he gets well soon and will return to the field sooner rather than later.

I feel real bad for Hishaw! I hope he get's back and makes an epic comeback.

I echo the others and saying what a shame it is; I feel so bad for him. And what a tremendous season he was having.

Hopefully our depth at the position (as well as the continued strong play of the o-line) will help us still stay strong in the running game.

Daniel, praying for your speedy recovery. Whether you choose to continue playing football or not I hope your body fully heals.

Hoping for a swift and complete recovery for this young man. Tremendous play so far this season.

His absence could really hurt us, he was by far our best goal line run option. Maybe we could use our TE Casey as a running back in goal line situations?

He’ll be back for the Orange Bowl.

The Hishaw injury was a tragedy caused by several factors.

First, Daniel's running style is to fight for every yard and refuse to go down.

Second, the Officials failed to blow the whistle when his forward momentum stopped.