‘We have to be ready’ After back-to-back blowout wins by both teams, Duke, Kansas eager for tougher test 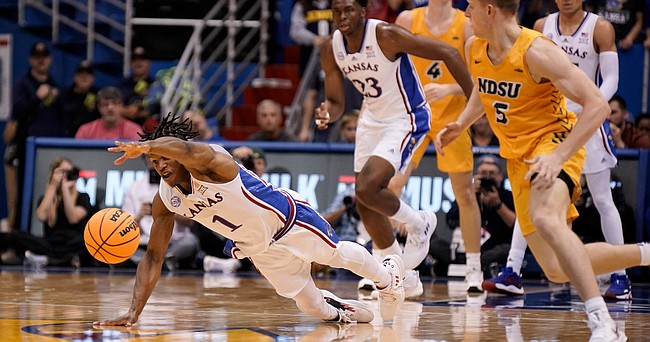 Kansas guard Joseph Yesufu (1) lays out on the floor for a loose ball against North Dakota State during the second half, Thursday, Nov. 10, 2022 at Allen Fieldhouse.

Seventh-ranked Duke steamrolled South Carolina Upstate, 84-38, on Friday night, to set up a Champions Classic showdown with No. 5 Kansas next week that will feature a pair of blue bloods that sit at 2-0 on the season.

All four games have been blowouts, and no one on either side is expecting that trend to continue next Tuesday night, when KU and Duke meet up at 8:30 p.m. at Gainbridge Fieldhouse in Indianapolis.

Kansas defeatd Omaha and North Dakota State by an average of 24 points per win and scored 86 points per game in the process.

Duke, meanwhile, won its two tune-ups by an average of 37 points per win and scored 78 points per game in the process.

Five different Blue Devils scored in double figures in the two games, with freshman wing Mark Mitchell, from nearby Kansas City, Kansas, leading his team at 15.5 points per game.

Even with all of those numbers and endless firepower, the only thing anyone on either team wanted to talk about after their most recent wins was defense.

Similar words were uttered by Kansas freshman Ernest Udeh Jr., after the Jayhawks rout of NDSU on Thursday night.

“Defense turns into offense,” Udeh said. “I always believe that.”

Both coaches — acting Kansas coach Norm Roberts and first-year Duke coach Jon Scheyer — also have spent much of the first couple of weeks of the season talking about getting stops and making sure their players commit to that.

“We’ve spent a lot of time on defense,” Scheyer said after Friday’s win. “That has been our main focus, and I think we're in a good spot. … I think we have the makings of being a good defensive team. We are on our way and on some rotations and close outs we need to do a better job. The effort is out there and that is where it starts on defense.”

Defense has long been a staple of each program.

That goes back to the days when Duke’s players first started slapping the floor to show they were ready for the next defensive possession and to the universal understanding that Kansas coach Bill Self’s teams always put defense first.

Roberts was asked recently how good he thought the Jayhawks could be defensively. Like any coach would, Roberts put a couple of disclaimers on his answer, saying KU needed better rim protection and to rotate better on defense. But the gist of his answer, like the one that came from Self in the preseason, was that he thought the Jayhawks had a chance to be elite on the defensive end.

Most of that has come as the result of KU’s suffocating first five minutes, which set the tone in both victories and put the opposing offense on its heels right out of the gate.

All five Jayhawks on the floor started both games with off-the-charts defensive intensity, and their pressure led to steals, deflections, turnovers and run-outs for easy buckets.

Looking at just two games is a small sample size, though, and the first four opponents that faced KU and Duke have an average KenPom ranking of 255th. So, there is still more to see and more to learn about both teams. That’s why these early-season tests against top-tier talent are so valuable year in and year out. Win or lose, each team gets a true read on where they stand and what they need to work on.

Duke junior Jeremy Roach said after Friday’s win that he already had tried to explain that to Duke’s newcomers.

“You’ve got to lock in for 40 minutes,” Roach said. “These (early) games, you might be able to take some plays off, maybe. But a game like Kansas, you have to be ready every possession. Every possession matters because the game can turn at any point. So, just stay hungry. We know they’re going to be hungry; they’re the defending national champs, so we have to be ready.”

Added Roberts: “The Duke game will be a lot of fun. It’s a great atmosphere to play in, it’s great for our guys to enjoy that and compete at a very, very high level, but it’s not a make-or-break game. Our guys are excited about it, and they should be.”

The extra focus on D seems to be a challenge for some new players. It is good that there’s good peer leadership in that.

Looks like a hanging paragraph in the middle. “That’s why these“?

Awesome catch. Thanks for pointing it out. I do that way too often and it's just a product of me trying to go too fast and crank out too much content. Always appreciate the help when this happens. Fixed now.

Just something to keep in mind when you're looking at stats and comparing it — even subconsciously — to football, which only has 131 Division I teams.

At least some of us really appreciate all the content you’ve been cranking out almost single-handedly. An ooops here or there is trivial by comparison.

Knew there were more teams than FB but didn’t realize it was 28%. Thinking more to the rankings of the teams standing in late March. 28% would be great for FB, but 28% of 300+ would cause the roof to fall on some in the Phog.

Appreciate you recognizing that. It's been a crazy busy time and we are short-handed. Hopefully not for long.

On top of that, my wife and I are expecting our second child any day (!!!!) so that's added a lot to my plate, as well. It could be an interesting week on that front, so if the site is a little wonky or slow to be updated for a few days, please bear with me and rest assured I'll be back on top of things ASAP.

We're super excited about the new addition and I definitely want to be there for my family as much as possible.

Therefore, no Indy on Tuesday or Bahamas next week for me. It'll be weird not being there, but I'll continue to do the best I can to bring you interesting content and analysis AND be there for my wife and kids.

Grady and Udeh look ready. Rice and Zuby are coming along, but need a bit more time.

Harris looks refined and polish. Wilson is better and confident. McCullar fitting really well on both ends. His experience will be huge. KJ looks ok and just needs reps.
Clemence seems ok but a bit out of sorts.

We do this every year but let’s talk redshirt! Zuby Rice I’d like both to stay a while. Grady is already ahead of his game and will be ready by years end for the NBA. But I could see him staying one more year.
Dook will be a good early test!

Gradey could turn into an interesting case study in the NIL world depending on how this year goes. I think Gueldner mentioned this in the post game after NDSU, but Gradey is someone that could command some major NIL deals nationally and if he's not a lock for the lottery, could he potentially make more money playing for KU as a sophomore (insert KU paying players joke) than he would as a late first or second round pick? If the former is true, then would he stay and try to improve his draft stock to be a lottery pick or would he go pro to become a pro? In prior years, the desire to become a pro has outweighed the decision to stay in school even if it was the correct decision, but that might change depending on the financial considerations with NIL deals.

Tshiebwe faced a similar decision and has made a ton off of NIL this offseason (through a loophole), but he's also an undersized center that doesn't have strong NBA prospects unless he grows another couple of inches or develops a handle and an outside shot. So while his decision was lauded to return to school rather than declaring for the draft, he didn't have the same draft potential that someone like Gradey has.

Pettiford reminds me of a a poor man’s Collins!

The KU team that Duke faces on Tuesday will be a lot different [and better] if Duke faces them in March!

So will Duke. We are likely the more experienced team.

Matt, here's another shout out for all you do for us in Jayhawk nation. It provides a daily dose for our passion of all things Kansas basketball. And best wishes on a new, healthy baby and delivery for your wife.

Matt, just my 2-cents worth of thanking you for all the effort and work you put into helping us keep up to date on KU sports. You crank out a lot of stuff and you're as human as the rest of us. There are going to be slip-ups! If we can't accept an occasional slip-up, something's wrong with us. I've followed KU sports far longer than you have, in fact, longer than you've been around. But you have an inside track that really helps the rest of us. Thanks Much! Oh! And congrats on the upcoming newborn. Trust that all goes well.