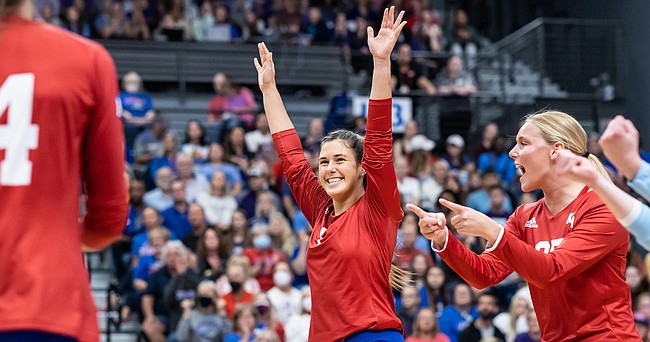 Kansas volleyball libero Kennedy Farris, a junior from Lansing, throws her arms up to celebrate a point during the Jayhawks' three-set sweep of Kansas State on Wednesday, Nov. 2, 2022, at Horejsi Family Volleyball Arena.

The victory was the 10th sweep of the season for the Jayhawks, who entered the week ranked No. 26 in the RPI rankings, third best among Big 12 teams.

The Jayhawks got great defensive play from Lansing native Kennedy Farris, who picked up her 1,000th career dig in the sweep and all-around balance from the rest of the team.

“Offensively, we were really good,” KU coach Ray Bechard said after the match. "We took a little break at the end of the first set and had a big kill by Rachel Langs to end that set. After that, it gave us a newfound competitive confidence and we took off from there. We played with poise and with confidence, as well as purpose. All of those came together for us."

Wednesday's victory was the 207th Big 12 Conference win for Bechard, which moved him into a tie for second place in league history with Nebraska's John Cook. Texas coach Jerritt Elliott is on top of the all-time wins list with 331 and counting.

The Jayhawks' defense held K-State to a .183 hitting percentage during Wednesday's victory and the offense came from there. Anezka Szabo collected double-digit kills for the second consecutive match, with 12.

“Anezka set the tone on Sunday," Bechard said. "She got right back into it today. Kennedy Farris is playing at a high level, too. Those two are really setting the tone and pace for our team."

Langs also reached double-digit kills, with 10, and Kansas as a whole hit .394 on the night.

Up next, the Jayhawks will travel to Waco, Texas, to take on Baylor at 2 p.m. Saturday at the Ferrell Center. Kansas lost to Baylor in five sets earlier this season in Lawrence, with its two wins in the match coming by the score of 25-13.

Saturday's clash with the Bears will be streamed on Big 12 Now via ESPN+.

Not sure what the writer was drinking when the column was written. London Davis had 1 kill (not 14), Langs had 10, Szabo had 12, Elnady and Bien had 9 each.

Nice way to close out the regular season. Let's hope the K-State springboard effect works for the second year in a row.