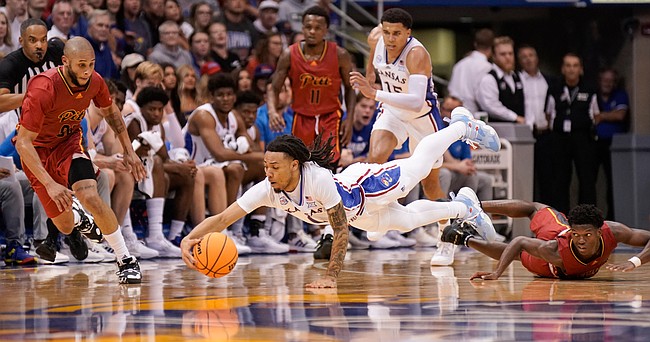 Kansas guard Bobby Pettiford Jr. (0) lays out for a loose-ball steal against Pittsburg State during the first half of an exhibition on Thursday, Nov. 3, 2022 at Allen Fieldhouse.

It took fifth-ranked Kansas more than five minutes to score its first basket of the game and just one possession to score in the second half.

After weathering an ugly start and an early surge by Pitt State, the Jayhawks found their rhythm and rolled to a 94-63 exhibition victory over the Gorillas at Allen Fieldhouse.

That included two 3-pointers, where KU shot 8-of-20 for the night, led by a 3-of-5 shooting night by freshman guard Gradey Dick, who scored 20 points in 23 minutes. 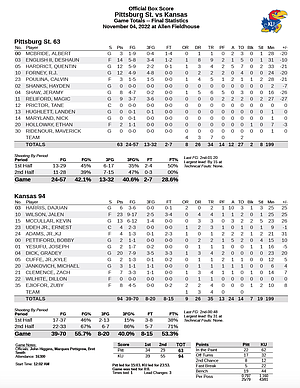 After falling into a 21-6 hole midway through the first half, the Jayhawks started the slow climb back.

“We’ve been down before in bigger games than this, so I knew that we just had to settle in and start playing our game a little more,” Wilson said. “We got back to it, and I never was worried.”

Added Harris: “It was really the defensive end where we struggled, so we just have to keep working on that.”

McCullar said finding the spark was “a collective effort,” and Pitt State coach Jeff Boschee, a former KU great as a player, used his team’s start as a point of pride to sell to his players.

“I told the guys at halftime, ‘Hey, the defending national champs had to press you to get back in the game and find their energy. You should be proud of that,’” Boschee said he told his team.

Kansas coach Bill Self, who coached his team on a game night for the final time until the Jayhawks head to the Bahamas in three weeks, said he was proud of the way his team responded to adversity and quickly found what worked.

“At least tonight we created havoc,” said Self, who, starting with Monday’s game, will serve a four-game, self-imposed suspension relating to KU’s NCAA infractions case. 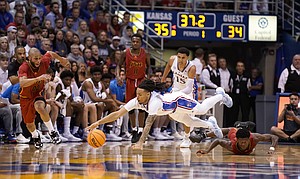 View a gallery of images from Thursday night's exhibition against Pittsburg State at Allen Fieldhouse.

For nearly the entire first 10 minutes on Thursday, KU’s offense looked rusty and disjointed and the defense looked flat. At one point, Kansas was shooting just 12.5% from the floor in the first half. By night’s end, the Jayhawks’ wound up at 55.7% shooting, after draining 22 of 33 shots in the second half.

As soon as KU flipped its intensity switch to on, though, things turned quickly. McCullar was the Jayhawk manning the switch. In a two-minute span, he picked up two steals for baskets and drained a 3-pointer. Those plays sparked a 14-0 run that cut the PSU lead to 21-20.

Kansas claimed its first lead with 6:33 to play in the half, when Dick hit a 3-pointer from the wing, showcasing his high and quick release.

As soon as KU flipped its intensity switch to on, though, things turned quickly. McCullar was the Jayhawk manning the switch. In a two-minute span, he picked up two steals for baskets and drained a 3-pointer. Those plays sparked a 14-0 run that cut the PSU lead to 21-20.

Kansas claimed its first lead with 6:33 to play in the half, when Dick hit a 3-pointer from the wing, showcasing his high and quick release.

After the bucket — his second of the night at the time — his mother, Carmen, stood up in her seat and repeatedly pumped her fist above her head in celebration. The way her son played the rest of the night, it’s possible Mrs. Dick will need to ice her arm on Friday.

In his first unofficial game as a Jayhawk — the stats don’t count because it’s an exhibition — made three of five 3-point attempts and looked more comfortable the more he played.

Fellow-newcomer McCullar, a transfer from Texas Tech, was equally as impressive in his KU debut. He finished with 13 points on 6-of-12 shooting and added three rebounds, three assists and five steals.

Although he played limited minutes after a slow start, Udeh got on the board late in the second half with a lob dunk that gave Kansas a 76-53 lead.

On the next two possessions, the Jayhawks went back to Udeh with lobs. He missed the connection on the first attempt and was fouled on the second.

Two possessions later, they went there one more time, this time for one of the game’s biggest highlights. After Adams picked up a steal near the free throw line, he tossed it ahead to Harris, who had a clear path to the basket.

Rather than taking the layup, Harris tossed a pass to Udeh off the backboard and the big man did the rest.

The Jayhawks are now 60-2 under Self in exhibition play, with the two losses coming during a pair of overseas contests several summers ago.

Kansas freshman MJ Rice did not play in Thursday’s game because of a back injury that Self said has kept him out for about a week.

And this is with Coach Self on the sidelines! Imagine what it will be like the first four games of the season while he's suspended!

I hope this isn't going to be one of those seasons where we play down to the opponent's level game after game. I've seen that movie more than a few times to know it never ends well.

Bad news distracts teams, no matter who they are playing.

Glad we won, but Goff/Geerods direction are to blame.

Lots of new pieces fitting in. Mistakes were made.

Why are we talking to Gonzaga about joining the B12? They have not had college football since 1941. Why have our teams traveling 1,000+ miles to play a game during the conference?

Just paying tribute to the football team - get down by 2 touchdowns before we wake up. Loved watching Grady Dick.

No worries. Just a warm up game to get the jitters and rust out, get some guy's feet wet and warm up the team magnet. 65 minutes went to guys who have never played with anyone else on this team. 77 if you count Kyle Cuffe Jr. 18 more minutes went to players who didn't get off the bench in MOST games last year. Pitt State didn't win much last year, however, they are an experienced team. They were just a team fired up to play against the National Champions. Once KU's talent and fledgling chemistry showed up, FIRES OUT! Games are like practices: Things go wrong, things go right. Sometime a team is all diSskuMBoB-YoolaiTiD, then sometimes its a thing of grace and beauty. No worries.

It was good to see many of the newbies, especially Dick, McCullar and the freshman bigs who look super athletic and unpolished. Gotta like Pettiford who Self has been high on from the beginning. He could be a difference maker off the bench. We need Jesufu to pick up his game and get into the flow. Obviously, there is lots to do and time to get in done. Our rebounding sucked on both ends. We may have to go through some early defeats and poor play before it gets sorted out. We do have depth, but coach settles on 7-8 and there are 10 or more in the mix. As always making shots is a key. It was great to see Boschee again- loved the guy when he was playing.

The post game show on ESPN+ was very insightful and Jeff Gueldner shared some heartwarming stories of love and appreciation for all of those near and dear to him during and after his Cancer episode and how we tend to take so many wonderful people and experiences in our lives for granted and need to learn lessons and make better decisions moving forward.