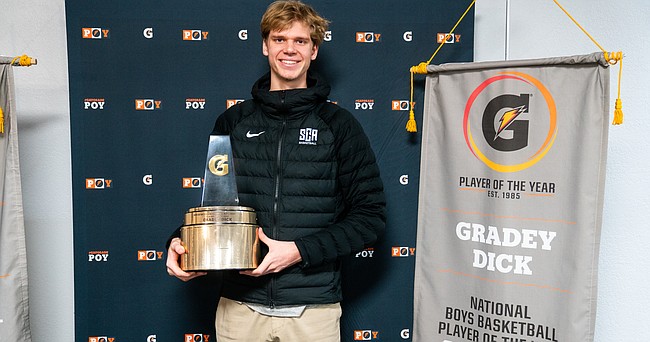 Future Jayhawk Gradey Dick has been on fire with his Ochai Agbaji impersonation of late.

No, the Sunrise Christian Academy standout has not copied Agbaji's jump shot or tried to match his numbers. Instead, he has been racking up award after award for his stellar senior season in high school, just like the KU senior has been for the Jayhawks at the college level.

One of the bigger honors to come his way was revealed on Tuesday, when current Boston Celtics star Jayson Tatum surprised Dick with a virtual greeting to inform him that he had been named the 2021-22 Gatorade National Boys Basketball Player of the Year.

Dick was presented with the trophy at his school, with family, coaches and teammates around him to celebrate his success. He said he was thrilled to receive the honor and that he appreciated the opportunity to be remembered for his play on the court as well as his efforts off of it.

“It’s one of the biggest awards you can receive as a basketball player," he said Tuesday. "So for me to be that player, I’m thankful.”

The award, which recognizes not only outstanding athletic excellence, but also high standards of academic achievement and exemplary character demonstrated on and off the court, distinguishes Dick as the nation's best high school boys basketball player.

The Gatorade Player of the Year Selection Committee, which leverages experts including coaches, scouts, media and others to evaluate the nominees, selected Dick from nearly half a million other student-athletes who play boys basketball nationwide.

“Gradey is a long and lean knock-down shot-maker with a high basketball IQ and nice positional size,” said Paul Biancardi of ESPN Basketball. “More than a one-dimensional player, he will also finish drives, take charges and rebound, all of which helped his team win the NIBC regular-season title. What makes him special is that he combines talent, effort and good character. Kansas has an incoming player who will make an impact both on and off the court.”

A McDonald’s All-American Game selection, Dick was one of five finalists for the Naismith award. He will represent the United States at the Nike Hoop Summit in April, and he was a member of the gold-medal winning Under-18 U.S. team at the 3-on-3 World Cup last summer.

A member of the Young Life Christian ministry, Dick has volunteered locally at a food pantry and shelter for the homeless in addition to serving as a middle school math tutor twice a week for the past two years. He has also donated his time to the Special Olympics, Sunrise Christian Academy Basketball Camps, the Buddy Hield Basketball Camp and as a guest speaker/guest coach for younger students at school during his lunch period. Dick also has maintained a weighted 3.66 grade-point average in the classroom.

“When you look at the stats Gradey Dick has achieved on the court, it’s undeniable that he’s worthy of joining a long line of past Gatorade Players of the Year,” said Gatorade Senior Vice President and General Manager Brett O’Brien. “There is a ton of talent among the nearly half a million student-athletes across the nation who compete in boys basketball, but no one lights it up quite like Dick while also excelling in the classroom and making a difference in his community.”

Congratulations, Gradey! Cant wait to see you in a Jayhawk uniform next season!

One commenter criticized him last year for underachieving - when he was playing behind several D1 recruits.

Coach Self is restocking the wing talent with Gradey and Rice. And then there’s 2 bigs to compliment the group that is currently playing. Things should keep rolling nicely.

Looking forward to seeing you in. A Jayhawk uniform! Welcome! Rock!Chalk!

If he makes it here Dirk we should be quite a team next year.

Something about counting chickens still in theirs eggs and a Portal keeps coming up. Don't help me it will come to me.

Andy Dick is hilarious. Let's hope that he is related.

I believe Wiggins is our only prior Gatorade Player of the Year winner.

You would be correct.

The way he plays, he's more like a forward, no? Either way, congrats, GD! Can't wait to watch you & your strokes, dunks, slashes. It's long overdue. Number of dunks with current team, is probably just under 20 this season so far. I surely miss Dok.

Steve - While the 5 positions are still commonly referenced, those designations seem to fit less and less all the time.

It came up in the interviews posted. We have 3 wings that start and one that subs. They bring slightly different skill sets, but are also pretty similar. It would seem that Gradey and MJ both fit that group quite nicely.

Rodney - It will be interesting to see who comes back next year. I don’t get the feeling we’ll have the portal exodus that we’ve seen in the past. Maybe if Cuffee is homesick? I guess David could, but I doubt it regardless. He’s graduated and seems to have mostly hit his ceiling. The lineup opens up for the freshmen.

The bigger question IMO is does CB or JWil explode enough in the next 1-4 games to launch them into the draft. Hopefully they do have 4 great games, but still come back to lead the team and replicate OA.

I expect that we won't know much about Braun and Wilson till much closer to the draft. With the rules as they are I wouldn't be surprised is half the roster applies for the draft.

But in the mean time we still have games to play

Agree, they will likely do what OA did. Find out where they might go in the draft and come away with what they need to do to play at the next level.

I think one or two might use the portal try another school.

Braun is not draft material at this stage of his career . He cant catch and shoot ,he cant rise and shoot off the dribble ,Brauns shot release is too slow which is the reason he cant do both of the things i mentioned . Hes a decent defender but not fast enough of strong enough for the NBA .His 3 point shot is not consistent at all this season.

ESPN Mock draft dudes disagree. That have CB solidly in the middle of the second round.

As far as roster spots, there will be plenty of room for people who redshirted or didn't get much PT this year to see much more next year.

Even if Braun and Wilson stay( unlikely)

Obviously KU may add some transfers, which could impact things. But it depends on what Braun and WIlson do and if any guards transfer. I can't see any post players transferring this offseason, they all will have a chance to play next year.

Good breakdown, Chad. However, I see Adams and Clemence as more of the '4' position and they compete with Wilson for minutes. So, if last year is a lesson, 1 or 2 of the trio Adams, Clemence, Wilson will be gone. For the guards, either or both of Cuffe and Pettiford will leave. Look no further than Enaruna, Moore, Jossell, Tyon Grant Foster, and Muscadin. Players who don't see themselves getting minutes hit the portal. Kids wanna play.

I figure that a minimum of three of the afore mentioned will leave, so yeah, KU will seek their replacement from the transfer portal.

That feeling you get when you feel you've been somewhere or experienced something before.

1 Seed, League and Tourney Champion, 30 win season, #3 ranking, rotational players [Mitch and Mac] with some injury issues, historic Sweet 16 success with a challenging but beatable #4 seed, an Elite 8 match up against either double digit seeds, one you've beaten twice already, the Final Four in the city you last won a National Championship, all things pointing positive.

I have this overwhelming feeling of dread that KU is going to blow it again. The feeling is almost palatable.

Rodney, Brianna, Bryce, Dirk, Brett, Dale, Jonathan, Joe, Suzi, Mallory......somebody please talk me away from the edge of the ledge!!

Thanks for the hex Tony :))

I am standing right beside you! It looks dark down there.

I feel strongly that CB and JWill will be back. The big jump in stock that Ochai did by coming back is right before their eyes. Congrats Grady!

To me, the difference is the leadership. What was the bulletin board quote that year? It was more than just the quote tho.

This year, we’ve got, “You’ve gotta respect each team because they also got here.” Though the players didn’t comment specifically, I think it was Coach that mentioned how ISU was really close to beating us. I think this group of players is humble enough to appreciate that and use it to drive them. Find the next gear.

You’ve got a POTY candidate who won’t even talk about it, but instead tweets his teammates about working to get better together. You’ve got his teammates that see his work ethic and are pushed/led to do that much more in support.

You’ve got an offensive explosion waiting to happen who came here to learn D, and has even if he’s not perfect, and is totally bought into following Coach’s lead (see quotes). And even Coach’s growth to allow and appreciate the unstructured O at times (see quotes).

The situation might be similar but the team is vastly different. To me, the one aspect that is concerning is the health of our 5’s and experience at depth, but maybe we have a Cole v.2.

Tony - I couldn’t begin to tell you about the geography part, but I think there’s some similarities to’08 when we played 10 seed (?) Davidson in the E8. Not sure how much the players remember, though everyone knows Steph, but Coach definitely remembers. Guessing he’ll be reminding the players in various ways, though more indirectly than saying, “Hey, remember when we almost lost to Davidson?”

‘08 also had a couple humbling losses during the season and even to end the previous year similar to ours, though fortunately no “ymca” games this year.

I’m also noticing some familiar phrasing from the past. Do you remember the pregame talk from the locker room that was broadcast? Coach has been using that same sort of message; have fun, but it will be more fun (if we win to advance to) next week.

I’m super confused by the comments above that CB is not currently draft material or that if he “blows up in the next few games” and becomes a draft target. Have you not noticed he’s a first round pick on most of the mock draft boards already? Take a look. I’m not saying he’s gone- I think he should be back- just that he’s already there…