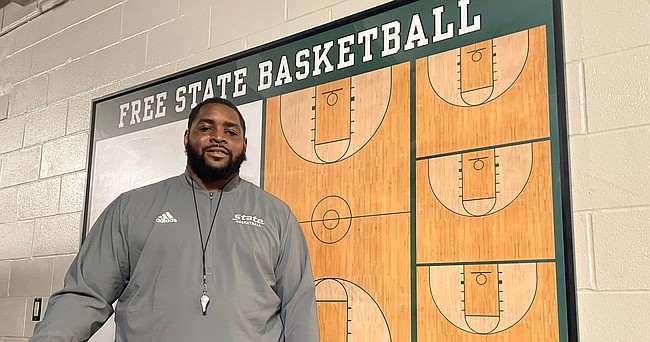 In their early days together at Chicago's Crane Tech High School, it was commonplace for a young Sherron Collins and then-head coach Anthony Longstreet to engage in shouting matches from time to time.

But they always ended with a hug and maybe even a few tears.

That was the first time that Longstreet saw a clear vision for Collins' future. After a standout prep career in his beloved hometown and a legendary run at Kansas, that future is now here.

Collins, at age 35 and with his playing days behind him, is now in a position to do for others what Longstreet did for him as the head boys basketball coach at Free State High.

"It was something I preached to him the whole time," Longstreet told the Journal-World when asked if he thought that Collins would get into coaching. "One of the things I wanted him to envision was that he had a chance to actually be that guy in Chicago. But now he's at a point in his life where all the stuff I used to preach to him is coming to fruition. I knew it was in there somewhere; it was just about Sherron maturing and getting to this level."

Collins, who recently ran his first Firebird basketball camps after officially being hired in early June, said he owed a lot to the dozens of people who helped him make the move into coaching. Of them all, from Kansas coach Bill Self to KU assistant coaches Kurtis Townsend and Jeremy Case and countless other former teammates, friends and family members, Collins recently said he thought Longstreet was the most proud.

"He saw this vision way before I saw it," Collins told the Journal-World.

Basketball has always been Collins' passion, but he believes coaching his calling.

The life he has today and many of his best memories came because of basketball. And now that he's in a position to help others create similar memories, he's ready to give back as much as he can to both the game and the Lawrence community.

"I knew when I was playing that when I was done I'd be coaching," said Collins, who has wanted to join the full-time coaching ranks for several years. "I just always want to be around the game and I'm big on helping kids."

Teaching young hoopers the proper form on a jump shot or how to execute a killer crossover dribble is one thing. But helping them grow up and manage all of the things that life can throw at them is where Collins, and those who know him, really believe he can excel.

"Where he came from is nothing like where these kids are coming from," former Collins teammate Brady Morningstar told the Journal-World. "I know that every kid in America has stuff going on and tough situations, but what he can do to help these kids and teach them how to fight through all that stuff. That's where he can really make an impact."

Morningstar, who graduated from Free State and is one of the program's all-time best players, was the one who first told Collins about the opening. But seeing how the two former Jayhawks have been like brothers for the past 15 years, the conversation wasn't as much a friend giving another friend a heads-up as it was Morningstar telling Collins to go after it.

"It's the break he needed, I think, to get to what he wants to be doing," said Morningstar, who admitted that it was a little "surreal" to have his close friend coaching his former school.

Things moved quickly after that initial call from Morningstar. Collins first called Self to bounce the idea off of him and then paid a visit to Case and Townsend, who helped prep him for the interview process.

The two KU assistants threw questions at him to make sure he was ready, asked him to think about things he had not considered and drilled into him the idea that this was the right time — and place — for him to make this kind of move.

"It was a little nerve-racking, but I had some great people helping me in my corner," Collins said. "It was different than anything I had done. In basketball, you let your game speak for you. But with this I had to come in and sell myself."

Former Free State Athletic Director Amanda Faunce, who was part of the committee that made the hire, said what Collins showed during the interview process took the idea of hiring him from a cool idea to something bigger.

"All of the candidates we interviewed had extremely high basketball IQs," Faunce said. "But we understand the importance that all of our head coaches can have on our student-athletes, and that was something that was clearly very important to Sherron. He talked about his experience in high school and the things he learned from his mentors. He's lived it firsthand as a player, which I think will translate very, very well when he's coaching here at Free State."

Self agrees. And he told the Free State administrators as much when they called him while checking Collins' references.

"I think the kids will love him and I think the parents will love him," Self told the Journal-World. "I think he'll do well. He's hungry. He needed an opportunity. And this is a great one."

Like Longstreet, Self said he, too, was proud of the life Collins has made for himself and his family, and the KU coach believes that Collins is now mature enough and has the proper perspective to take full advantage of this opportunity.

"Nobody's ever going to question his knowledge of the game and he'll be able to translate his knowledge to the youngsters," Self said. "But I'm excited to see how he can plug himself into Free State, into the program and also into the community."

So far so good in that department.

Collins said he was blown away by the effort and passion his Free State campers displayed during their first time working together in mid-June. Effort was no issue. Love of the game was easy to spot. And several of the high school-aged campers even approached Collins about doing more when camp was over for the day.

"You always hear coach Self talk about the buy-in," Collins said. "And I think we've already got that. I'm getting their best effort and they're ready to work."

That fact puts the players and their new coach on the same page.

"They're going to get all of me for sure," Collins said.

There's still a long way to go before any of this is completely comfortable for everybody involved. There will be a learning curve for Collins as a head coach. And things beyond basketball will challenge him and his players in ways he has yet to see or experience.

But Collins said he already was counting down the days to tryouts in November and he is most thankful — surprised, even — for the love and support he already has felt from so many.

"There's a lot of people behind me, and we're going to make this work," he said.

Morningstar is one of them. Longstreet's another. Collins' old high school coach even said he already started looking into ways to get to Lawrence for a Free State basketball game this winter.

"It's just crazy to think about and I'm just so proud of him and excited for him," Morningstar said. "From where he came from and how we met and the relationship that we have, for him to be the next head coach at my old high school, it means everything to me."

Added Longstreet: "With his passion and his love for younger people, there's just no way he won't be successful."

Has TTAYLOR been approved for his assistant?

Really proud of Sherron and happy for him. Hope it works out for Tyshawn, too. How cool is that to have those two as your coaches!

I must admit this is a really, really good article.

It sounds like Sherron is ready. My initial though when I heard that Sherron was trying to hire Tyshawn as his assistant coach was that it seemed like a risky move. I think that it's been a little easier for the community to see the maturation that Sherron has gone through, because he's been around KU more in recent years. I'm also sure that people close to the program know exactly how much Tyshawn has grown. Obviously, it makes no difference what I think, but if I were Sherrron I would try to leverage my connections to seek out a local coach from area schools or youth leagues.

Sherron Collin’s was a great player, but the fact that he went after Tyshawn Taylor as his assistant shows me he lacks the analytical skills and good judgment necessary to be a successful head coach, unless Tyshawn Taylor has a great track record built up as an assistant coach in the Midwest.