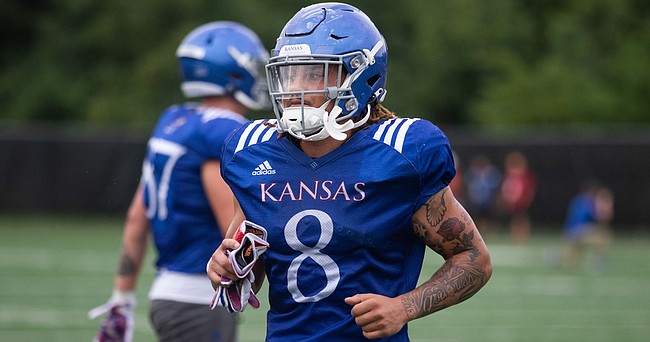 There's no denying that one of Kansas' strengths entering the season appears to be the depth it has at running back.

Sophomore Devin Neal returns after a breakout first season. So, too, do redshirt junior Torry Locklin, who emerged as a multidimensional threat before a November ankle injury, and redshirt sophomore Daniel Hishaw Jr., who was productive in 2020 before missing all of last season with a hip injury.

That, Neal said, is thrilling.

"We're really dynamic, and we can throw a lot of teams off guard with how fresh we can be, the different looks we can get — three running backs, two-running back sets," Neal said Sunday after the Jayhawks' fifth training camp practice. "Just the dynamics of our room is phenomenal and it's going to be really exciting to watch."

But that also came amid a change in offensive approach under first-year coach Lance Leipold, a series of injuries that included Neal missing the season finale against West Virginia and the departures of Velton Gardner early in the season and Amauri Pesek-Hickson after it.

Year 2, then, should be much better in many ways, those running backs said.

Part of Neal's confidence comes from a greater understanding of the Jayhawks' wide-zone rushing attack, which was pioneered in the NFL by coach Mike Shanahan and the Denver Broncos in the late 1990s.

It's generally an uncommon approach in college, one that emphasizes stretching the field and asking the running backs to wait for their teammates to set up blocks before cutting upfield, often well outside the tackle box.

"Our backs have to do a really good job of maintaining their tracks, understanding where the vertical seams are opening, but also, too, setting up those second-level blocks," running backs coach Jonathan Wallace said. "The more reps those guys get, the better they're going to get at it."

A year ago, as the scheme was being installed, the coaches acknowledged that getting players to adjust to it would take some time.

Neal said Sunday that "the guys who were here before the transfers — me, Torry and Daniel, those guys — where we are now versus last year is phenomenal, and the two guys that came in, they picked it up right away."

Leipold, offensive coordinator Andy Kotelnicki and offensive line coach Scott Fuchs rode the scheme all the way to the best rushing attack in the FBS in 2020 with an average of 6.7 yards per carry. Running back Jaret Patterson, now with the Washington Commanders, ran for 7.6 yards per carry and 178.7 yards per game that season.

And while that approach may have worked at Buffalo, Wallace, who joined the Kansas coaching staff in 2020 and was not with his colleagues that season, believes it can work in the Big 12 as well.

"I think at the end of the day, for us being a really good offense, we have to be consistent in everything that we do," he said. "That's a big piece of it — us running the football and us being on the same page."

It may have taken some time — not through reluctance but through repetition — but Neal thinks he and his fellow running backs finally are.

What remains to be seen is how much more the coaches can get out of the position. Kotelnicki joked last week about defensive coordinators panicking when seeing the Jayhawks line up with four running backs on one play, but several of those running backs said Sunday that doing so is closer to reality than Kotelnicki may be leading on.

"I mean, three? Four? Two?" Thomas said. "We've got a lot of backs. We can find a way to get a lot of different looks on the field."

Neal thinks so, too.

"It's definitely a different challenge and stuff," Neal said. "But just finding out what each person can do differently than the other and you know, plugging that in — that's what the coaches are for. They put us in the best situation possible."

With Bean running the offense you would also have one additional person that by most accounts is the fastest person on the team.

Legs were able to help the offensive line develop and something tells me that we will be using both of our QBs significantly this year.

Jeff - The talk about being multiple and putting the best players on the field would certainly lead one to believe we will see Jason in some ways throughout the year. I think we will see even more the creativity of the coaching staff.

Almost as exciting is their willingness to go for it. The most obvious example was going for the 2-pt and win the first chance they got at ut. Maybe less obvious was the number of times they went for it on 4th down. I’m glad they’re being aggressive. My guess is that it will be more successful the better the running game gets.

Finding ways to use all the RBs could also be significant in recruiting. One of the last and best instate recruits is John Randle. It might be difficult to get him to join the fun with so many RBs, but with so many sophomores we need to build for the future as well. Guessing he won’t want to wait half his career for graduations ahead of him. Being multiple would seem to go a long ways to helping him see his place in the rebuild.

You what was exciting? In 2007, on 3rd and 2, we ran the ball up the middle and got the first down. EVERY. DAMN. TIME. That was very exciting to me. I love our coach and trust him. Just saying.

Love it Al. About the only first down that isn’t exciting is after a kickoff and theirs.

It’s good the RBs are feeling good about their offense. However, we all know that the RBs are only as good as our offensive line.

It’s all about the trenches.

Doug - Absolutely true. I personally don’t know enough to comment on effective line play, but there we’re somethings in the trenches that have been encouraging. 1. I was listening to a podcast recently that seemed to know about good play, and indicated that while Malik Clark was a good OG, he never really picked up the new scheme. Sorta like Gardner, but without a 4* freshman as an alternative. It sounds like Reed-Adams might be a reasonable replacement this year and the whole team should benefit from a year of reps. We really need to build some depth though. 2.It seems like the DL should be better this year. We’ve got 6 mostly Sr/SSr DTs, so the depth should help especially games/season progresses. Hopefully they can play well enough that not only does it help the team this year, but also motivates some upperclassmen to transfer in.