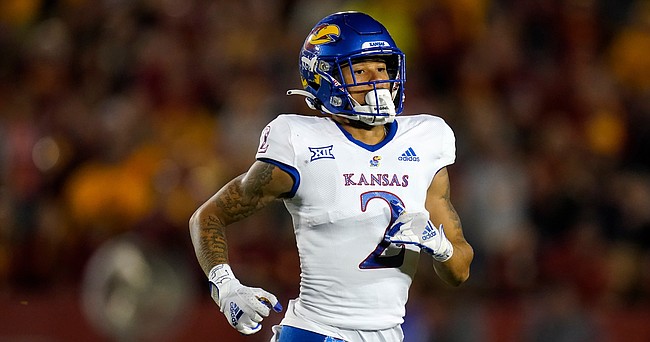 Kansas wide receiver Lawrence Arnold runs on the field during the second half of a college football game against Iowa State on Oct. 2, 2021, in Ames, Iowa.

Wide receiver Lawrence Arnold, who was expected to be one of the Kansas football team's top targets next season, wrote on his Twitter account on Tuesday evening that he intends to transfer.

Arnold, who will be a redshirt sophomore in the fall, started nine games last season. He tied for second on the team with 27 catches, matched a team high with three touchdown receptions and was fourth with 316 receiving yards.

Eleven players have decided to leave the Jayhawks since Thursday, though he's the only one who was expected to play a significant role. Wide receiver Majik Rector also wrote on Twitter on Tuesday that he was transferring, as did cornerback DeVonte Wilson, who noted shortly thereafter that he had committed to Florida A&M.

His departure means only three wide receivers — Trevor Wilson, Luke Grimm and Steven McBride — are set to return to the Jayhawks for next season, and only five who are on scholarship. That trio combined for 64 of the 151 catches made by wide receivers last season and 195 made by the entire team.

Arnold was able to preserve his redshirt season by playing four games as a true freshman in 2020 but was limited by a shoulder injury in spring practice a year ago. He spoke last month about how despite the loss of Kwamie Lassiter II, who was a sixth-year senior last season, the Jayhawks would have "one of the best receiver rooms in the nation."

"We're making sure that we're doing everything right to make sure that our receiver room, we're all on the same page," Arnold said on March 22. "Me, Trevor, Luke — really, the whole room, we're all stepping up as like all the role models for people that are coming in and people that just got here."

A three-star recruit out of Desoto, Texas, Arnold had scholarship offers from Kansas State, Cal and Northwestern, among others.

Coach Lance Leipold said after the spring game that he and his assistants would be meeting with players to offer evaluations and provide feedback over the following weeks.

Players have until May 1 to enter the transfer portal in order to be eligible to play next season.

Oof, this one hurts.

Looks like we might need to have our extra RBs splitting out more often. The good news is that this staff has shown an ability to adapt to strengths of the team.

This one hurts. I really was envisioning big things for Arnold next season. I'm nothing more than a fan but even I could see his talent and potential. Really sorry to lose him.

Maybe we need Jason Bean to become a WR to go along with the others. His speed might work really well as a WR, if he can catch the ball (no idea about that). He could still be a backup QB or maybe Easters or Vasko will be ready as backups. Just a thought. Maybe not a very good one.

Big question is why? Apparently he didnt like what he was told at evaluations. We will have to come up with another big tall receiver.

We have lots of short receivers, but you need one bigger guy for jumping up in the end zone.

After the KU spring football game, I saw Lawrence Arnold with his helmet off, smiling, and appeared to be happy.

Let me play the role of "Captain Obvious", "somebody" is recruiting him away!

Before I dub him Lawrence "benedict" Arnold, this is college football free agency! There is nothing you can do about it.

KU will be combing the transfer portal for wide receivers this summer, "there are plenty of fish in the sea"!

And it isn't even May 1st (deadline for fall and winter sports).

May Day! May Day!

Edward is right. Someone has his ear. It is obvious we will emphasize the running game. Sounds Ike someone is advising him he can catch more passes elsewhere.

Dang. I completely understand those that announced their plans to leave up to now as they weren't projected as starters. Unfortunately, Lawrence was projected to start and be a major contributor. We have to trust in this staff that the know what they are doing and hope they find some HS commitments soon and work the portal again this summer effectively (as they did over the winter). I'm a little nervous though! RCJH

I think he wants to go to a program with a better QB that can get hi the ball. It was not going to b e his playing time at KU,

My guess is that some big time football programs are reaching out to him. I have a hard time believing it's playing time, coaching or our QB1 as some have mentioned. He also was a Miles recruit and there has been a mass exodus of those guys the last few years. Either way, if he doesn't want to be here then go. Expecting any kind of loyalty out of these guys is laughable and something I'm no longer wasting my time counting on. NCAA is allowing free agency and these kids are taking advantage of it. Good riddance and good luck, we don't need you.

Glen. I agree. It's no different really than if he tore his acl in spring practice. We don't have him anymore, so move on. The portal giveth and the portal taketh away.

Karen - The staff worked the portal effectively last summer as well. Part of the reason we had a smaller recruiting class last year as well as some previous years. It’s the reason no will write about how many scholarships are available anymore. It’s macramé.

Definitely agree on the correction at QB. While Kendrick and Bean were both down at 60% or less, Daniels completed 70% after being able to watch and grow. You gotta love Jason’s wheels, but a QB has to be able to complete more than a coin flip.

I think Stanley has been the only QB we’ve had since Todd that has made it through an entire season, so we have to have an effective 2, but that player needs to be developed so we can get Bean on the field and use his best attribute; his speed.

As for Arnold’s decision, it could also be more than self centered. As much as they want to play, they also want to win. Some move on for that reason as well. We aren’t projected to win the majority of our games, and some aren’t willing to work to change the reality. At the end of the day, winning requires everyone being on board. Anyone that isn’t fully committed needs to make space (physical, time, energy, attitude, …) for those that are willing to work.

Don't know why the Reply link isn't working. Anyhow, I agree with Glen and the others who feel he is being recruited by others. With NIL becoming so profitable for these guys, the $$ talk very loudly.

I don't agree about having any concerns about his QB. Daniels showed last year he can sling the ball and even with the run game being a strong point there will still be plenty of catches to go around.

How was Arnold at blocking?

I'll repeat what I've posted before: this rebuild will be harder than the one Snyder did in purple land (although that wasn't really a rebuild, because they weren't ever any good). We blew our window with four awful hires in a row, when we had an easier path to a bowl game, with more schedule control. Now, a new reality is in place.

Our challenges in terms of player recruitment, development and retention are bigger than ever. Recruiting locally is massively hard due to a decade of awfulness. Developing players is very hard when you have trouble getting them here on the one hand, and keeping them here on the other. And retaining top-end, talented guys will now be very hard, until we start getting to bowl games.

Leipold is wise to understand that the urgency right now is at "threat level midnight" (for fans of The Office). No one has ever built a program through panic, but right now Leipold and Co. must have a clear plan to get us out of the darkness. Or we WILL be left out of the next realignment.

Imagine this scenario this fall: KU comes out swinging, competes in every single game and shocks the world with a four-win season. What then happens with our top 6 to 8 players? They'll have proven their ability to compete at this level, they will be on the portal radar, do we then lose the guys who helped us over-achieve? And if we go 2-10, what happens to the roster?

We hired the worst AD, possibly in P5 history. He, in turn, made the two worst hires, possibly, in P5 history. And then the landscape changed. If you haven't noticed, stuff is getting real......

I definitely agree that this rebuild will be tough.

Terry, Arnold, will get a shot at greater FB-NIL schools. Others will just leave. After separating the chaff, it would seem that we’re still ahead in the transfer game.

The rebuilding will come down to the character of the players. Coach Leipold is a player leader and developer. I think that will continue to become more and more evident, and eventually the portal works even more in our favor.