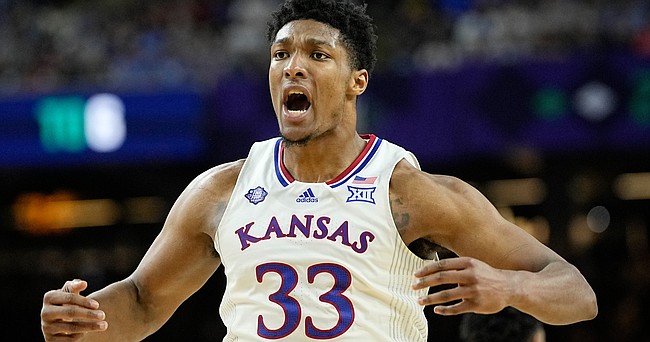 Kansas forward David McCormack celebrates after scoring against Villanova during the first half of a college basketball game in the semifinal round of the Men's Final Four NCAA tournament, Saturday, April 2, 2022, in New Orleans.

While his immediate future is up in the air, Kansas forward David McCormack is looking at his decision to turn pro or return to KU for one more season as “a bonus.”

Brought about by the extra year of eligibility given to all college athletes who played during the 2019-20 school year that was heavily impacted by the COVID-19 pandemic, McCormack’s potential return is something he never thought he would have the option to consider.

Now that he does, he views it as a safety net of sorts.

“It’s something I can say I have in my back pocket,” he said Thursday after his team’s postseason banquet. “A lot of people don’t have the fortune to do that. I think I can just take it for what it’s worth.”

It remains to be seen what that is, but there is plenty of momentum around McCormack being done with college basketball. In New Orleans, after he capped his career with 40 points and 19 rebounds in the two biggest games of the season, chatter around the media room was that McCormack may have just made himself some money.

He has not appeared on any mock drafts during the past couple of seasons, but putting up that kind of performance on college basketball’s biggest stage certainly caught some attention and could make McCormack a candidate to become a second-round pick or to secure a free agent tryout with an NBA team this summer.

First, the 6-foot-10, 250-pound forward from Norfolk, Virginia, absolutely would have tested his NBA draft stock last offseason had it not been for foot surgery that kept him off his feet and unable to fully workout for most of the summer.

With that in mind, there’s no reason to think that McCormack will not at least test the waters this offseason, seeking feedback and guidance on whether making the jump now or returning to KU would be the best move for his career.

Second, all of the players McCormack came to Kansas with are now done with college as well, so the natural progression may be for him to move on, as well.

He said Thursday that he had not thought too much about it yet, with the euphoria of winning a national title still dominating his thoughts more than 10 days later. He also said he was not leaning either way at this point.

“I’ve got to hear what the feedback and stuff says first before I can lean in any direction,” he told reporters at the banquet. “It just takes a lot of time and a lot of thought. I think right now I'm just kind of looking for feedback as far as what's going on and how teams may feel about me before I make any type of decision. And that’s kind of the only thought I’ve given into it.”

After looking and feeling as good as he had all season long at the end, McCormack also said his lingering foot issue would not keep him from being able to workout for whoever wants him to.

“Feeling great,” he said. “Considering I haven't really done much. I've just been celebrating. So, it hasn’t been giving me any problems. Me and Ochai were joking after we won the (UNC) game, ‘We’re feeling so good we could play another half.’ So I’m hoping I’ll still have that same kind of feel.”

McCormack has until April 24 to declare his intentions to enter the draft. If he does, he could retain his college eligibility by working with an NCAA-certified agent during the pre-draft process.

Doing so would allow him to remove his name from the draft pool provided he stays within the rules and makes that decision by June 1.

Kansas coach Bill Self said senior All-American Ochai Agbaji did not have a decision to make. “It’s time for him to go,” he added.

But the timeline above and those key dates apply to McCormack and KU underclassmen Christian Braun and Jalen Wilson, who also are likely to explore their options this offseason.

I can't imagine he will stay. Going out on top is very special. As much as I like to believe we can repeat, that's a long shot. He should go make some money in Europe, or see if he can get on the roster of an NBA team. Who knows? Maybe he could develop into a very good role player in the NBA?

He needs to get his injured foot repaired. It’s remarkable that Dave was able to play through pain and achieve what he did this past season.

Coming back as a defending champion with NIL in effect might be a better financial decision that going pro wherever he might land.....

Also, look what another year did for Agbaji. If McCormack can get that foot fixed and spend another year in college, playing like he did in the FF, he could seriously upgrade his stock. I don't have a gut feel whether he'll be back but I wouldn't rule it out at this point.

I do not think DMac right now is NBA material. Can you see him against Doak, Joel E, I can't. If his foot heals and he has one more year he could be a monster on the court then his stock would be through the roof. It is about timing.

Big Dave will turn Pro and play somewhere on the face of this planet. Outer space voyages will be avoided at all costs. Rock Chalk!

If Big Dave decides for one more, awesome!! If he goes and makes it in the Association, bravo!! Dave wanted the ball down the stretch and scored buckets, his miss and rebound-put back is legend and then to pinning down low, finishing with a baby hook @ 22 seconds. Natty!!

(Every comment above is thoughtful and holds validity. Below, you can likely count on a geopolitical theorist spewing some form of esophogastric backwash saying otherwise.)

DMac seems to be motivated differently from other players. I wouldn't be surprised to see him return to KU, cash in on NIL money, finish his master's and start leveraging for his career after playing.

And while I understand the motivation behind the argument of go out on top. I would say that means something different for a 15 year pro or for a lifelong coach or something like that than for a 22 year old student athlete. I mean sure, he won a national championship, but he's still very young in the grand scheme of things he has a ton of life to live and a full professional career ahead of him in one way or another, so why not come back for one more year with your name and face plastered all over magazines and all over ESPN and enjoy the ride. He won't ever get this opportunity back.

All that to say this... I suspect that he will transition to pro basketball, but there is more than enough reason to stay as well. I wouldn't be willing to bet money either way. I'd pin it at 60-40 that he leaves... maybe 55-45.

Dave there isn’t a wrong answer to this so focus on the positive. On one hand you can play ball at the next level making good money both at home or abroad. On the other, you stay put and further your education and college experience.

Good luck and have fun no matter what you do.

gone gone gone. the Worst decision dmack could make would be coming back to ku. go out on top; do not give us another year to question him. u exceeded All our wildest expectations, dave, go out on top like a champ. u can live well in lfk any time, the rest of ur life, if u want. dont throw paint on a picasso. well done dave. adios. & rcjh!

Dave is a smart dude. He will gather all the information he can and make a wise decision. And we will all support him because he is family. RCJH