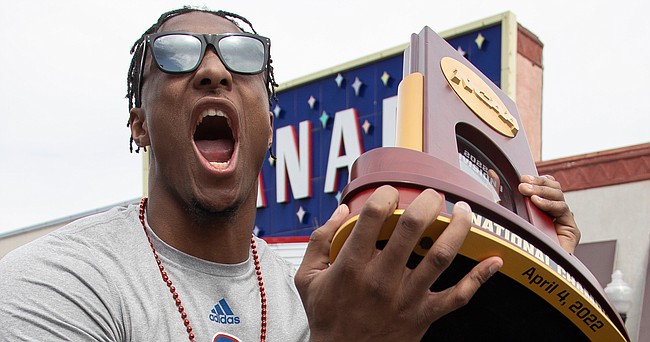 David McCormack holds the NCAA National Championship trophy and yells to the crowd during a parade Sunday, April 10, 2022, to celebrate the KU men’s basketball team winning the NCAA basketball championship.

They arrived at the staging area of the Riverfront Plaza just after 1 p.m. Sunday, a fleet of 48 cars ready to carry the national champion Kansas Jayhawks down Massachusetts Street.

Awaiting them around the corner were tens of thousands of screaming KU fans ready to celebrate with each vehicle.

The city’s first championship parade since 2008 unfolded on a warm and sunny Sunday afternoon in downtown Lawrence and it featured enough celebratory footage to fill a documentary.

By far the most noteworthy, beyond the pure elation on the faces of all who were there, was the fact that Kansas coach Bill Self, along with his wife Cindy and granddaughter Phoebe, rode in the same 1959 powder blue Corvette that he rode in during the championship parade in 2008.

Owned and driven by Lawrence businessman Doug Compton, it also was the same car that former KU coach Larry Brown rode in during the 1988 championship parade. The specialized front license plate, which had featured the numbers 88 and 08, was updated to include a red and blue 22 to the right of those numbers. 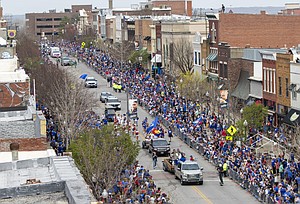 The word at the parade was that the car had not been started in quite some time and that mechanics were working to get it up and running, so it was parade ready, as recently as Saturday afternoon.

“That’s cool,” a smiling Self said before the parade began. “There’ll be a lot of cool cars out there, but there will not be one cooler than the one I’m riding in.”

With fans standing as many as 10 deep along certain parts of the route, the parade stretched from 6th and Mass all the way to 19th Street. Fans roared and shot video and photos from behind the barricades. Players roared back and waved, some even taking the time to sign autographs of items thrown toward their cars.

They signed shirts, jerseys, hats, basketballs and more and did it all with huge smiles.

Point guard Dajuan Harris Jr. hopped out of his convertible to high-five a fan in a wheelchair. David McCormack, who rode with Ochai Agbaji, both raised the roof and feverishly waved a shirt above his head while Agbaji held up the trophy for all to see.

Each time Agbaji hoisted the Jayhawks’ latest trophy the roar from the crowd grew louder. It continued that way for all 13 blocks and nearly a full hour.

At various points during the parade, the Ford Bronco Black Diamond carrying Agbaji and McCormack was serenaded with chants of “MVP! MVP! MVP!” from the crowd.

Similarly, near the courthouse at 11th and Mass, KU guard Remy Martin, who rode in a white convertible BMW with Jalen Wilson, heard chants of “Rem-y! Rem-y! Rem-y!” from fired-up KU fans.

A little earlier, in the 1000 block of Mass, sixth-year KU senior Mitch Lightfoot snagged a canned beverage of some kind, catching cleanly out of the air with one hand. He promptly cracked open the can and chugged its contents, much to the delight of the fans who witnessed it.

“What a way to end it,” Lightfoot said of winning a title during his last year and bringing a parade back to Lawrence. “It’s unreal. It’s almost like a storybook ending.”

Asked if he had received any advice about how to act during the parade, Lightfoot said it was a first for him and that he was appreciative of all of the tips. 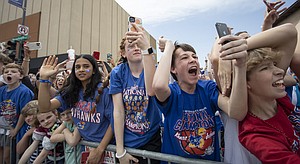 The Jayhawks and their adoring fans did much more than that, with some fans arriving as early as five or six hours before the 2 p.m. start to make sure they had a good spot.

Having scored a prime curb-side spot in the 700 block of Mass, KU junior Mya Lambden and her mother, Kavassa Lambden, of Overland Park, said the KU parade was different in one respect from the Royals championship parade of 2015 and the Chiefs parade of 2018.

“Access was much easier,” Kavassa said. “I'm surprised how good of place we got.”

Mya said she became a KU basketball fan when she started at KU and there was one Jayhawk she was particularly eager to see.

An hour before the parade started, 1999 KU graduate, David Quinn, of Lawrence, was enjoying a brew at the Sandbar.

Half a block to the west, Heidi Minnis was waiting at the corner of Eighth and Mass with her 4-month-old son Hugh. Minnis said she had been a Jayhawk fan for four years, having married a KU grad. As for her baby, there was no doubt about his future rooting interest.

“One hundred percent he's a Jayhawk,” she said. “He has his blue T-shirt on. We’re really just down here so he can experience it.”

Dee Raker, of Lawrence, said she moved to Lawrence to go to law school. Becoming a Jayhawk basketball fan was an inevitable part of that process. Nonetheless, she didn't think the season would end with a national title in November or when the NCAA Tournament began.

“I became a believer when they started coming back in the second half (of the title game),” she said. “I was here to see the players. It’s a nice experience for them.”

Thirteen-year-old Connor Jackson Hadl, who described himself as a lifelong KU fan from Linwood, had little trouble identifying his favorite part of the parade. 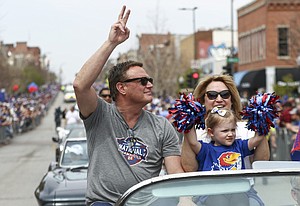 Kansas head coach Bill Self and his wife Cindy and granddaughter Phoebe ride in a parade Sunday, April 10, 2022, to celebrate the KU men’s basketball team winning the NCAA basketball championship.

“When Remy Martin held up the championship trophy,” he said. “Remy always brings a strong vibe.”

Neither a KU grad nor a Kansan, Briana Netten, of St. Joesph, Missouri, said she couldn’t miss the parade.

And she was there again on Sunday, even if several people in attendance were still wrapping their heads around the fact that their team was this year’s national champion.

“It still does not feel real,” KU guard Joe Yesufu said. “I’m just waiting for it to sink in.”

Added Self: “One thing about being in a parade, that means you’ve done something special.”

While Sunday’s celebration might’ve marked the last of the community-wide celebrations for this year’s title, it won’t be the last.

The Jayhawks are planning to have their postseason banquet on Thursday and Self said United States Senator Jerry Moran (R-KS) had told members of the program that he was looking forward to hosting the Jayhawks’ trip to the White House in the near future.

"Let's do it again next year," one elated KU fan shouted from the crowd as the cars drove out of sight.

Couldn't be there in person like I was in 2008 - now that northern Indiana is my home - but I was there in spirit!

Feels good to be a Jayhawk!!!

Wonderful scene. I am very happy for the team, and the coaches.

i was able to watch it all on youtube from start to finish. It was fantastic. It proves that when people are dedicated and unselfish and strive for a common goal they can accomplish anything.

This is one of my all time favorite teams, because to beat them, you had to out team them.

It was such a great event.

What a year: 1) won NCAA championship, 2) overtook Kentucky in total wins, 3) Bill Self, the best coach in the country, got second natty, 4) another Big 12 title, 5) big 12 POY, and 6) got to see Remy Martin, the best guard in the country, albeit injured most of the season, without whose help we would not have won the Big 12 tourney or NCAA tourney.

Didn't make the parade, but great to see all the pics and videos! I was on Mass street for the national championship game, and the energy as epic! The feeling when we pulled to within 1 after being down 15 at half! The buildup/waiting to explode vibes when we got the ball back with just over 4 seconds up by 3, and the pure jubilation when the clock struck zero! What an unforgettable night! The best part was halftime. I expected to see downtrodden and hopeless faces, perhaps a lull in the excitement, but the jayhawk faithful weren't about to give up. I put on my 2008 national championship shirt on at halftime, knowing that this years squad had it in them...... and they did. :)

*was not as lol

Bryce you are so right. With Emmert saying its taking too long, you get the feeling "something wiked this way comes".