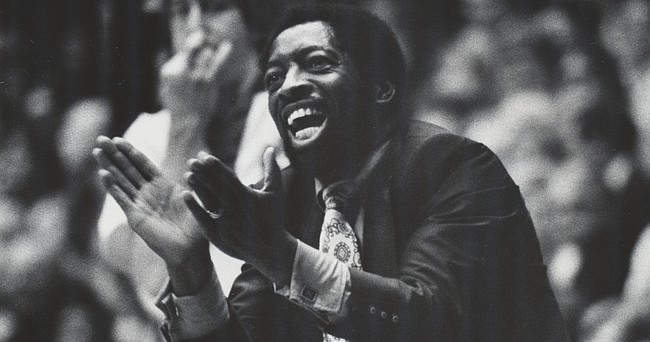 Former Kansas basketball assistant coach Lafayette Norwood encourages the Jayhawks from the sideline during a game.

The Wichita native spent four seasons as an assistant coach under KU coach Ted Owens from 1978-81. In that span, Kansas won the 1978 Big Eight regular season championship, two Big Eight Holiday Tournament titles, in 1978 and 1979, and one conference postseason tourney in 1981.

Led by All-American Darnell Valentine, Kansas posted an 81-38 record with Norwood on the sidelines and the Jayhawks twice advanced to the NCAA Tournament in 1978 and 1981.

“First of all, Lafayette was a lot more than an outstanding basketball coach, he was a really good man,” Owens said in a Kansas Athletics news release announcing Norwood's passing. “He cared for his players everywhere he coached. He was just a really good man.” 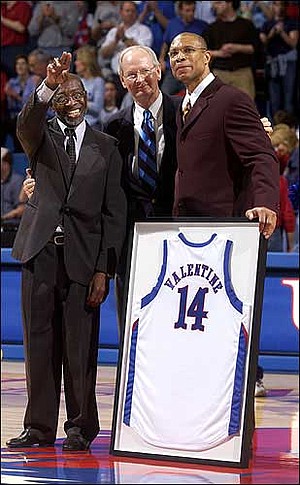 Added Valentine: “I am extremely heartbroken. He was a father figure to me in every sense of the word other than biological. He was a pillar of virtue, integrity and character (and) if there was another one like him on this earth today, to me, we could solve America’s problems. That’s how strongly I feel about him.”

Known as a top recruiter during his time with the program, Norwood was a frequent attendee of KU home men’s basketball games after his retirement. In December 2020, he participated in a Ted Owens-era reunion via video conference hosted by Kansas Athletics and K Club.

Norwood’s coaching career spanned parts of six decades in multiple sports and at both the high school and collegiate levels.

A 1952 graduate of Wichita East High School, Norwood attended Cowley College for two years before completing his degree at Southwestern College in 1956.

In 1969, Norwood made history when he was named the head basketball coach at Wichita Heights High, becoming the first Black coach in the Wichita school district. Norwood led Wichita Heights to 109-56 record and a state championship in 1977 before joining Owens at KU.

After his days with the Jayhawks, Norwood spent 23 years as the golf coach at Johnson County Community College in Overland Park. He was also the Johnson County men’s basketball coach for 10 seasons from 1982-91.

RIP, Mr. Norwood. The Jayhawk Nation is in mourning for losing one of our own. God rest your soul.

In my several decades on this Earth, I can't recall that I've met a finer human being. RIP, Mr. Norwood.

Maybe I missed it, but I wish we’d see Darnell Valentine at more reunion events.

I hope he died BEFORE the Jayhawks put on that $#!+show against Texas. I'd hate to see anyone with the connections he had to the KU program spend his final moments witnessing that garbage.

If only Antoine Carr would have followed him to KU as well as Darnell - what might have been!