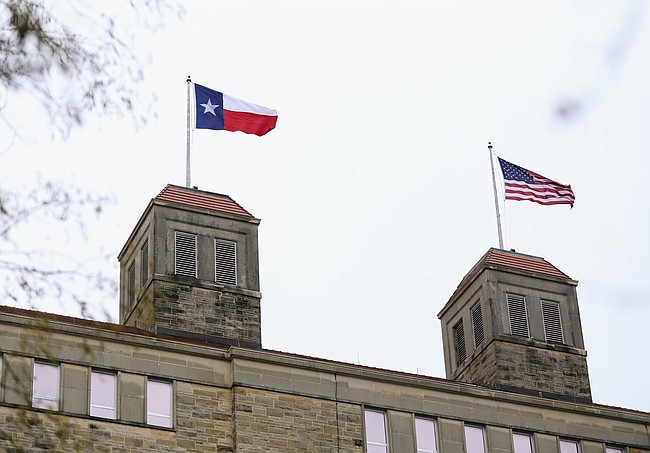 A Texas flag flies atop Fraser Hall on the University of Kansas campus on Friday, Nov. 23, 2018. An apparent prank, the flag was flying during part of KU's home football game versus the University of Texas before being reported and taken down about noon.

Yes, that was the Texas state flag flying over the highest and most iconic roofline on the University of Kansas campus on Friday.

For fans who looked uphill in the middle of KU’s home football game against the University of Texas, there it was. The opposing team’s state flag where the KU flag should have been, snapping in a brisk wind right next to the American flag atop seven-story Fraser Hall.

It’s not clear what time the Texas flag went up or how long it had been there, but according to emergency scanner traffic, someone reported it to KU police shortly before 11:40 a.m.

Right at noon, the Texas flag was down and the usual crimson and blue “K” flag was back in its place.

The KU-Texas football game started at 11 a.m. at Memorial Stadium.

The flag stunt was not planned by KU, university officials confirmed.

As to how the apparent prank was pulled off, answers weren’t immediately clear. 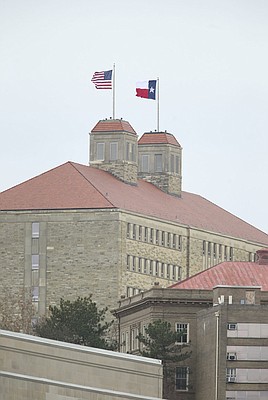 On Friday, in the minutes before the flag came down — if not all of Thanksgiving break — all the exterior doors to Fraser Hall were locked.

Fraser Hall’s rooftop flagpoles are accessible only from inside the building, and the area to reach them is kept locked.

Inside that area, KU Facilities Services department workers access the flagpoles by climbing spiral staircases inside each of the two cupolas, standing on a grate and lowering the flags up and down through trap doors, according to a previous Journal-World feature. The flags are 8 feet by 12 feet and not that easy to corral, especially when it’s windy.

Multiple people reported the rogue flag to KU police, who also saw reference to it on social media, university spokeswoman Erinn Barcomb-Peterson said. She said police found no signs of forced entry and that they are investigating the incident as a case of criminal trespassing.

Bevo is pissed he can't be on the field. Boys will be boys.

I guess someone needs to figure out how to light the tower blue when we beat them in Austin in basketball this year.

I'd like to know what KU employee opened the door so they could get up there. Someone needs to get canned

I think this is an attempt to spark a Mizzou style rivalry with UT. I am one alum who believes

We have no business within a Southern Conference. Our Big 12 days went away with Colorado, Mizzou, and Nebraska.

We will never have a Rival to equal Missouri... Even Silo Tech falls way short.

I would accept this from Missouri-we pulled stunts for nearly 100 years-but, not Texas. It is not their place-they simply are in the same Conference with us.

We need to start looking toward making the most of our assets (AAU Membership, major research University, Blue Blood Basketball, and the remake of Old Memorial) and looking for a new Conference to play in-Preferably one with a base in the Midwest after we build a Football Team. Coach Miles can and will do this

This is a long-term commitment, and it won't come overnight. But if we start the prep now- it will pay off in the future.