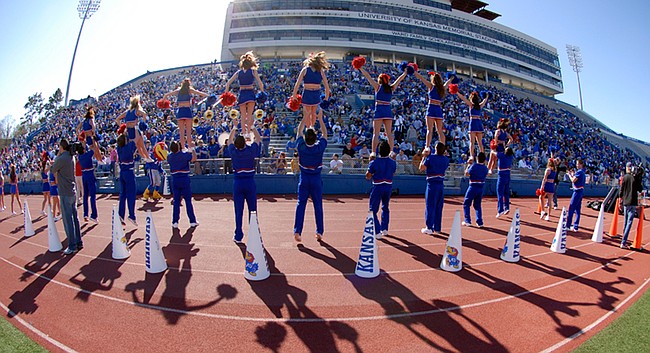 Kansas cheerleaders are hoisted into the air during the spring scrimmage on Sunday, April 15, 2007, at Memorial Stadium.

The University of Kansas’ Cheer Team has been placed on probation for a year because of at least one incident of hazing and action that harmed people, the university has confirmed.

Reportedly, the incident involved female cheerleaders being asked questions and then being told to remove an article of clothing when they answered incorrectly, according to a report in the Kansas State University student newspaper, which was based upon two anonymous sources who were on the team.

The anonymous sources said the incident ultimately ended up with cheerleaders being nude or partially nude and that at least some of the cheerleaders were seen by males who were in the house where the incident allegedly took place.

The Journal-World was not able to independently verify the accusations, which have since become the subject of national media coverage from The New York Post, Deadspin, Yahoo Sports and other outlets. However, the Journal-World did ask a spokesman for Kansas Athletics whether the department had any information that would lead it to believe any of the alleged incidents actually occurred.

Jim Marchiony, an associate athletics director for KU, confirmed an incident had occurred with the cheer team, but said there was very little the department could say about the incident because of privacy concerns.

“Once an incident with our cheer squad (not dancers) was reported, protocols to notify the university were followed immediately,” Marchiony said via email, clarifying that the allegations involve only the cheer team and not the dance team that is also part of the department’s Spirit Squad. “In addition to the steps taken by the University, Kansas Athletics imposed restrictions, additional education and punishment. No form of hazing is acceptable, and we believe this has been dealt with appropriately.”

The university’s latest Organizational Conduct Status Report does list that the KU Cheer Team was put on probation on Sept. 21, 2017 and that it will remain on probation until Sept. 26, 2018. The document lists three violations of the University’s Code of Student Rights and Responsibilities: organizational responsibility; harm to persons; and hazing.

The article in The Collegian at Kansas State alleges the incident took place on July 25, 2017. It alleges that six first-year students of the team were victims of the hazing. Two sources came forward to speak for the article, but did so only on the condition of anonymity out of fear of repercussions, the newspaper reported.

The article describes the alleged hazing as part of an initiation led by other members of the team. The article reports that the two women who came forward were dissatisfied with how coaches of the KU Cheer Team handled the incident once they were made aware of it.

So, in addition to all the other incompetence in the KU athletic department (sans the men's basketball team), now this.

You mean you're not going to throw the BB team under the bus too? They have had their share of problems in the not to distant past. Oh, that's right, they went to the FF so that should give them a pass for a while, and free you to dump on the rest of the programs.

It is a little sad that the action of the coaches weren't sufficient/sufficiently known to allow this to be a private matter that was dealt with appropriately, but then scandal does sell so good for LJW.

With all the mega salaries administrators one would think that we would have a well run operation and stuff like this would not happen. Is this stuff standard fare for KU team activities?

How did the UDK get scooped by a rival college paper

Dirk, when you said, "Scandal does sell so good for LJW," did you mean that they should not have reported on these allegations?

The report in The Collegian (https://www.kstatecollegian.com/2018/05/04/ku-cheerleaders-come-forward-with-hazing-allegations/) is from May 4, nine days ago, so LJW did not rush into print with the story. That report has a lot of information (such as the names of accused coaches) that is not on KUsports.com. It doesn't look like the LJW is playing this up at all.

This is disgusting it really is. These are women making other women take off their clothes in a room full of other other people with men present. Like women aren't vulnerable as it is. Probation? Some of these people should be thrown out of school. And to have the adult coaches treat the victims as the problem is reprehensible.

College kids have a long history of doing stupid stuff. This doesn't seem that bad to me. A hazing incident at Penn State resulted in the death of a pledge. This doesn't rate.

You're so right, Dane. The NERVE of them making a big deal of this ...

Clearly, unless someone dies it's not worth doing anything about it.

I don't have a problem with the cheer leaders making an issue of it but what they should have done is say, no thanks, I have too much dignity to take part in your juvenile rituals. I think I'll just keep my clothes on and go do some homework.

There is a phrase that the NCAA likes to throw around every so often in matters like this....

We have real problems if our athletic department can't even keep the cheer squad under control. This is not the pillow fight scene from Animal House. This is demeaning hazing and if this had happened to my soon-to-be-freshman daughter the doors to the executive offices of the athletic department are no thick enough to keep my boots from kicking them in.

The time for joking around about it is over. It is seriously time to strongly consider shutting down the football program and all related programs like cheer squad, dance team, etc. until we can get our house back under control both on and off the field. If that takes one to two seasons then so be it. Use that time to figure out how to build and pay for stadium upgrades that are reasonable and commiserate with our near term on-field performance and "real" potential attendance. This is a major embarrassment and the consequences need to be severe. Too many things happening that are doing great harm to the name on the front of the jersey.

The time is over for the over-paid, way too comfortable exec team in the Athletic Department, and they all need to be shown the door. It is time to rebuild all things Kansas Athletics in a fashion that reestablishes respect for winning, respect for TEAM, and respect for School. No longer are answers like "due to privacy concerns we are precluded from discussing these matters..." acceptable. There must be major accountability and current management is not capable of instilling that in anyone obviously.

Dennis, are you stupid enough to think that the Athletic Department should monitor the spare time of every person vaguely connected to athletics?

Did cheer coaches sanction this? Was it an official cheer event?

Are you hoping to be captain of the Chicken Little squad? Competition is stiff.... No hazing each other! On second thought, haze all you want....

Scott, Obviously the Chancellor today thought someone in the Athletic Department should be monitoring every athlete, no matter what sport who is on scholarship or not, and rightfully so Zenger paid the ultimate price today for his ineptness in this and many other areas of the Department YOU PUTZ! Try not being such a HOMER every day.