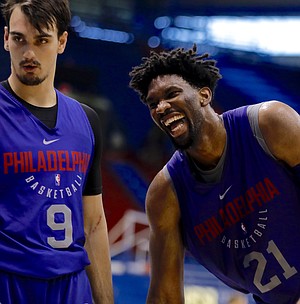 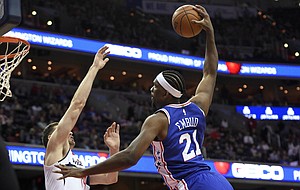 He is meeting the requirements of the NBA in self promotion and is one of the few who can actually back it up. His downfall will be his ability to stay healthy which is suspect. Playing only every other game leaves us with a doubt about how the grind will effect him.

His skill set is top ten no doubt and Self has over and over stated he was off the charts even when a freshman here. And as here he still leaves a gap in total belief because of his fragile lower body and now back.

Oubre Jr. is coming around and but his me first proclivity is being brought out by the NBA culture.

The thought of of Dok being infused with Joel's "mean Streak" is almost frightening in concept. The big boy would have to register himself as a Lethal Weapon!

I agree with Kent. Joel's "arrow in the heel" [refer to the Iliad] will be injury. The pace of the NBA can break a body down rapidly. I hope I get proven wrong and he has a Hall of Fame career but if initial indicators mean anything, that may be long odds.

I have come to the conclusion we won't know anything about Billy until game time at Texas and he is either talking warm up lay ups or he isn't in the building.

If there is a player named Paris then the Iliad reference is scary. Lol.

I really hope he does stay healthy, he's got a very long career ahead of him, and a lot of selections to the All-Star game coming down the pike.

I will forever wonder what KU could have done in the tournament that year if Joel had been healthy. He was already starting to show how dominant he could be, and he could have taken over that tournament.

Just one in what seems like an endless streak of crucial injuries that KU gets as the tournament approaches ... (or am I just biased because I pay more attention to KU than to other teams?)

I don't remember Joel having this persoanlity while he was at KU. He seemed pretty quiet.

Joel is having problems with his back, which has led to him sitting out 3 of the last five and 5 of the last 9 games. Even though he has returned to play the last two contests, he isn't moving that wel. If his career is cut short, which hopefully it won't be, I'd bet it would be the back issues that end up being the culprit, not anything with his feet.

As a lifelong 76ers' fan and a KU alum, I'm loving Joel being on my hometown team. He does need to cut way down on his turnovers though. Sometimes he acts like he thinks he's a PG, not a C. He is turning the ball over 4+ times per game, which is way too much. Ben Simmons is also turning it over 4+ times per game. The team in general is just really careless i with the ball and that's cost them at least a couple of wins.

NBA All-Star voting has opened, if anyone's interested in going onto nba.com and voting for him. He deserves to make the All-Star Game this season

So today (12/27) is Silvio's first practice session with the rest of the Jayhawks. Really don't see how he can help out much against the first round with Texas.