The Kent State football program is in need of a new head coach, and two current Kansas assistants reportedly have factored into the search.

According to Bruce Feldman of FOX Sports, KU defensive coordinator and assistant head coach Clint Bowen is one potential candidate for the Kent State job.

A former KU colleague of Bowen, Minnesota offensive line coach Ed Warinner, also reportedly is in the running for the job. Warinner coordinated the Jayhawks’ offense from 2007-09, and has worked at Notre Dame, Ohio State and Minnesota since.

The #KentState search has been a meandering one, I'm told. #Minnesota's Ed Warinner is a strong candidate, per source. Heard #KU DC Clint Bowen is also an option, among others.

None by Bruce Feldman

#Syracuse OC/QB coach Sean Lewis has emerged as a strong candidate for the #KentState, sources tell me... Have heard from some folks in the coaching world who are high on him.

None by Bruce Feldman 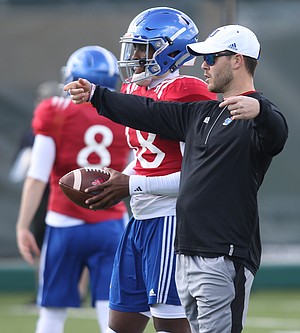 Bowen, who has been out of town recruiting, just completed his sixth consecutive season as a KU assistant. Each of the past four years, Bowen has served as defensive coordinator for former head coach Charlie Weis and current head coach David Beaty, while also serving as an interim head coach himself in 2014, following Weis’ dismissal.

A Lawrence native who played three seasons for the Jayhawks in the early 1990s, Bowen’s coaching career began at KU, as a graduate assistant in 1996. He became an official staff member for the program in 2000, serving as assistant director of football operations in his first stint on staff. Bowen then coached special teams at KU from 2001-05. He worked as co-defensive coordinator on Mark Mangino’s staff in 2006-07, and served as lone coordinator from 2008-09.

The longtime KU assistant spent 2010 at Western Kentucky and 2011 at North Texas, coordinating the defense at both programs, before returning to Kansas in 2012. In total, he has worked 16 seasons at KU — not counting three years as a grad assistant.

Riley, the younger brother of Oklahoma head coach Lincoln Riley, joined Beaty’s staff as an offensive analyst in early 2016 and coached KU’s quarterbacks this past year, his first as an on-the-field assistant at a Power 5 program.

Please take Bowen and Beaty. They are not P5 material.

Lol l believe the article said Bowen is a candidate not Bowen and Beaty. Wouldn't be ironic if Bowen got the jobband hired Beaty as his defensive coordinator? lol.

I sure the Kent State fans would love to see a defensive coordinator ranked at the bottom in every defensive category getting the job. Ooooph

It would be wise of them to go for the Syracuse OC or Ed Warinner. I wouldn't take anything that Beaty has touched these past 3 years.

We should have hired Warriner here 3 years ago. He has won EVERYWHERE he's been. His daughters even went to KU.

Of course he was demoted by Meyer from OC/OL to just OL and now is gone from there.

And YET....he STILL is a better option than what we have now.

Garrett Riley and Clint Bowen? Are you kidding me? You can’t make this stuff up. It’s like the upside down world.

Be careful what you wish for. If Wise and Armstrong came back next season, KU's defense will have starters, experienced backups and depth to overcome injuries and should be quite good. It's the offense that needs to become competitive.

Wise was huge and Armstrong was preseason bxii poy and they bad no success in stopping bxii offenses. If Bowen comes back it'll be more of the same.

You don't get better without solid coaching.

Bowen is average to above average at player development, the fact that DB's are mostly what KU is sending to the NFL is a testament to that. However, Bowen flat out sucks at game planning and play calling. He's been the defensive play caller for 6 years at KU, including the 2 years immediately after the Orange Bowl, and the defensive ranking are always crap.

Oh ya please take the Coaches now recruiting class has went to crap - -so yes by all means break up the Coaching staff turn t this program into even a bigger warm pile -of dog doo, ya hell ya let's do that -makes PERFECTLY good sense to me.

You don’t think all these coaches are protecting themselves rather than getting cleaned out next year when Beaty goes. The titanic is going down, better find a spot on the lifeboat

Can we waive our buyout clauses....

If Coach Bowen gets the HC job, I'll be happy for his family and him (not because I think he's a terrible coach).

Because, it will be will be the next step for him in his professional career.

Thank you Michael. Somewhere along the line we forgot these are human beings. Civility has been sorely lacking on this forum lately.

At least we both agree that he is a terrible coach.

Jeff, I feel that Coach Bowen knows what he's doing as a Defensive Coordinator and DB's Coach. What I have become frustrated about (with C. Bowen) is the fact that as long as he's been at Kansas, his defensive backfield (DB's) pipeline shouldn't have to be continually relying on JuCo Transfers year after year after year. But, it is what it is.

Yes very reliant on JUCOs and that infers that he can't bring in DBs to coach them up to play. He always falls short and relies on JUCOs to come in and at least cover.

However, I would say safeties typically are out of position. And with supposedly two of the best defensive lineman, we still give the QB all day to throw.

The defense is not successful. They might sell out on one or two plays to get a TFL, but on 2 out of every three plays the other team gets a 9-13 yard play. If you are getting 18-26 yards every three downs, you rarely stop anyone, even with a penalty or a TFL.

You guys keep showing your stupidity. Clint Bowen is a very good coach. It would hurt us to lose him.

Clint Bowen is better at player development than a lot coaches. 4 of the 6 Jayhawks in the NFL (sad it's that low, but that's another story) are DB's who were largely developed by Clint Bowen. Talib, Chris Harris, Dexter McDonald, and Bradley McDougald are Clint Bowen products.

His play calling and game planning do suck and I won't argue against that, but him leaving would hurt KU from a player development standpoint.

So nobody in 2 or 3 years and 2 from 10 years ago. Not much player development.

2008 KU defense had Aqib Talib and Chris Harris. Bowen was defensive backs coach/coordinator. Funny: No one thought he was crap then when he had a lot of talent to work with. I guess he has forgotten everything. Some of you same clowns supported Bowen keeping the HC job instead of hiring Beaty... armchair rejects

Thank you Mike. - -but these idiots don't want hear anything like that lol. What they do have is - -a very limited vocabulary. their whole train of thought that is IF they can think is or goes something like this - -Fire , whoever - -Get rid of whoever. how the hell do you expect any type of player to come here if he has no idea if the Coach that recruited him and that he wants to play for if he is even going to be here the following year.. - -You can't just keep the wash rinse redo cycle running every two-three years and expect better. Especially when your dealing with leftover warm dog doo. - They like the easy answer - -OH WELL get rid of him lmao. ya that works, makes a lot of sense huh? - -and then when the savior comes in to this dumpster fire and has the same results - -it will be like what the hell? - -then be like again OH WELL get rid of him again wash - -rinse and re cycle , they have no idea mike. couldn't agree more with you

Check your history...safeties coach...Co-Defensive Coordinator and let's be honest he wasn't the one in Charge in that Duo.

In 2008 when the other duo left, KU went from a 12-1 team to 8-5. The next year 5-7 and he was gone. The two teams he was over while not at KU were poorly coached defenses and sense he has returned, we haven't cracked the top 115 in defense...stick to facts.

Do these people supporting Bowen actually go to the games, or watch us play? Stats don’t lie. Bowen’s defense has been near the bottom at every place he has coached. Just unbelievably bad. I’ll gladly pay my WEF donation, which KU isn’t getting until Zenger is fired, to help sweeten the deal for Kent State.

David Beaty is coming back. It would be in the teams best interest to also have all coaches returning for some continuity. That's not what we have had here.

I wish nothing but the best for Clint Bowen, but it's time to say goodbye.

Here is how I feel. If this is what you believe, that HCDB had no choice but to keep CB as DC because he has been a loyal Jayhawk. Where is that loyalty now right before the Dec. signing period. It could effect our recruiting. I would have no problem with him improving himself after the signing period, but not let the rumors out ahead of signing time. If we lose 1 recruit because of the rumor, then show CB down the dusty road to somewhere else after Dec 20th.

Jack - You seem to be presuming that the coaches are behind the rumors. Heck, in most of the cases listed it isn't even clear that there has been an interview or interest on the part of the coach. Someone in football thinks someone would be a good candidate. Get a grasp of the fact that rumors do not equal reality.

What we know from the article is that Coach is on the road recruiting. Undoubtedly busting his to make our team better.

Benton - It would seem that "Report" in the title should more accurately be replaced with "Internet rumors" or "Journalist gossip" though the latter probably gets too brutally honest to be professionally wise.

Maybe a chance on that side of the ball with a new voice leading the defense would be a good thing? But who would take a one year job?

Exactly this job will only last til Beaty goes. One year

well, I hope one of them gets it, it would be a step up in programs.

Dirk, Sorry as I didn't make that sound like I meant. I meant that CB may not be showing that loyalty that KU gave to him.