Kansas guard Sam Cunliffe glances back in awe at the ceiling of St. Peter's Basilica during the Jayhawks' tour of Vatican City on Thursday, Aug. 3, 2017.

Rome — For Kansas guard Sam Cunliffe, an Italian Catholic who grew up among pictures on his grandparents’ walls of the old country’s most magical places, the signature moment of Thursday’s team trip to Vatican City came when he was in the silent Sistine Chapel staring up at Michelangelo’s “The Creation of Adam” some 70 feet above his head.

“God touching Adam, you see that almost everywhere, and to actually see the original painting was insane,” Cunliffe said after the tour. “I’ve been to the southern part of Italy before but coming up here and seeing all of this blows my mind. I actually want to live here one day.” 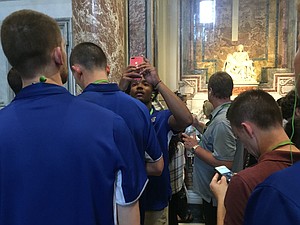 Kansas guard Devonte' Graham snaps a picture over the shoulders of his teammates during the Jayhawks' tour of Vatican City on Thursday, Aug. 3, 2017.

The nearly three-hour walking tour at the Vatican covered a little more than two miles and passed among some of the world's most famous works of art.

The Sistine Chapel, Michelangelo's masterpiece created over a four-year period in the early 1500s, seemed to be a favorite among Jayhawks.

Ushered down a narrow stairwell and into the 131-foot by 43-foot chapel, the Jayhawks were given about 12 minutes to simply stand and stare, admiring all corners of the room.

Walk-on Clay Young leaned on sophomore center Udoka Azubuike as the two craned their necks to examine the ceiling. Freshmen Marcus Garrett and Billy Preston took it in together, as well.

“To think one guy did that entire chapel and the amount of time and dedication that took,” sophomore forward Mitch Lightfoot said. “We think doing this takes a lot of work and that guy was on his back painting an entire chapel.”

Prior to entering the famed chapel, the Jayhawks passed through a series of galleries that featured statues, tapestries and paintings. Upon entering the gallery that sits just before the main entrance to the Sistine Chapel, KU coach Bill Self glanced up and said simply, “Good gosh.” 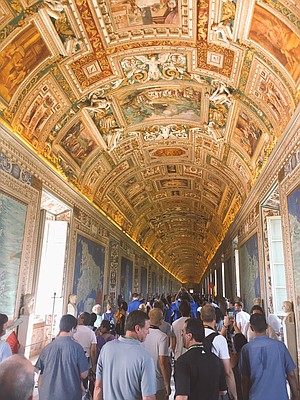 Escorted through the property by the same guide who led a tour of the Colosseum the day before, the Jayhawks learned a lot about what they were going to see before they saw it. For Cunliffe and Lightfoot, who both grew up Catholic, and many members of the KU coaching staff, some of the lessons about both the Sistine Chapel and St. Peter’s Basilica — the largest church in the world, which, on a jam-packed day, can draw as many as 60,000 visitors — were unnecessary but not unappreciated.

“I went to Catholic school my entire life,” Lightfoot said. “So I know that whole side of things and seeing it in person was just, wow. ‘This is where the pope lives. St. Peter’s down there.’ That’s super cool.”

From “The Creation of Adam" to Bernini's 10-story tall bronze canopy and Michelangelo’s Pieta — the only sculpture signed by the great master — the Jayhawks strolled through the tour marveling at the art and snapping photographs with their phones.

“Just to show my family, just to have it,” Cunliffe said of his many pictures. “You hear about it a lot. People always talk about the biggest church in the world and stuff like that. All that stuff dates back to 2,000 years ago and it’s amazing. I don’t even think we could build that stuff today.” 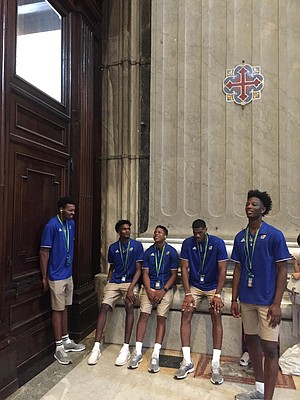 Kansas players, from left to right, K.J. Lawson, Lagerald Vick, Charlie Moore, Billy Preston and Marcus Garrett share a laugh while waiting at the exit of St. Peter's Basilica during the Jayhawks tour of Vatican City on Thursday, Aug. 3, 2017.

Thursday’s tour, which came before Game 2 of the Jayhawks’ four-game Italian exhibition tour Thursday vs. the Players Group, was not without its lighter moments.

At one point, when a particularly tall Italian security guard walked past Self, the coach wondered aloud if the man could play ball.

Later, as the team neared the end of its tour, guard Malik Newman did his best to distract the two guards protecting the steps built for the pope. None of his antics worked. Just before that, inside St. Peter’s Basilica, Self asked junior guard Lagerald Vick to guess how tall the Bernini canopy was. Vick, who hails from Memphis, guessed 12 or 13 stories.

“That’s a pretty good guess,” Self said. “It’s 10 stories. But does that look six stories taller than McCarthy Hall (the KU players dorm back on campus)?”

Join the Jayhawks in Vatican City by KUsports.com

How jealous are Keegs and Benton that you went on this trip without them? Did you guys Rock Paper Scissors?