While Sunday’s news that Devonte’ Graham was returning for his senior season brought with it excitement for the immediate future of Kansas basketball, Monday’s news carried visions of even more excitement down the road.

Through information obtained from their father, Keelon, Gary Parrish, of CBS Sports, reported late Monday morning that brothers Dedric and K.J. Lawson of Memphis had decided to transfer to Kansas. K.J. Later confirmed the news via Twitter by Tweeting simply, “ROCK CHALK JAYHAWK.”

The two Memphis natives will sit out the 2017-18 season per NCAA transfer rules and be eligible to play during the 2018-19 season.

“Dedric talks to Tarik (Black) a lot,” Keelon said of the former KU forward. “He talked to Tarik last summer and Tarik used to tell Dedric, ‘Man, you’re way better than I am, way more talented.’ Tarik told him, ‘If I had to do it all over again, I would’ve went straight there (to Kansas).’ Dedric also talked to (current Jayhawk) Lagerald Vick and he told him, ‘Hey man, it’s special out here.’” 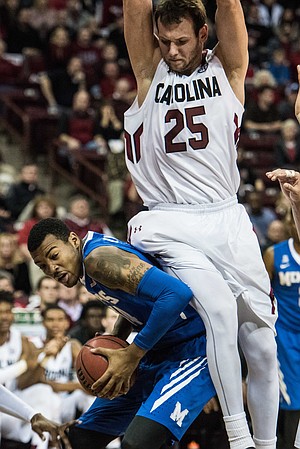 Last season, the Lawson brothers combined to average more than 30 points, 18 rebounds and 6 assists per game for Tubby Smith's Tigers, who finished the season 19-13.

Both players committed to former Memphis coach Josh Pastner, who has since moved on to Georgia Tech.

Said Pastner in an interview with the Memphis Commercial Appeal shortly after the duo signed in 2014: “I think both K.J. and Dedric are very talented young men. Both have been around winning. They’re high-IQ players. They’re long. They’ve got a very good skill set and good motors.”

Their father held a full-time coaching position on Pastner's staff but was demoted after Smith arrived in town.

Keelon said on Parrish’s radio show Monday that if he had kept his job as a full-time assistant on Smith’s staff, his sons would not be going anywhere.

According to Keelon, KU coach Bill Self was in Memphis on Sunday. Because the brothers had not yet signed with Kansas as of Monday, Self could not comment on either player.

Those familiar with their games could.

“Getting these guys with college experience in your program is a pretty big deal,” Bossi told Shay Wildeboor of JayhawkSlant.com. “With Dedric, you are talking about a first-round NBA draft pick. He is a guy who, assuming he’s as good as he has been, is someone who can compete for the Big 12 player of the year (and) K.J. is a potential all-league type player.”

According to Parrish's report, the latest recruiting haul by Kansas, which also featured an assist from Kansas assistant Kurtis Townsend, might pay dividends beyond the next two seasons, as Dedric and K.J. have two younger brothers — Chandler and Johnathan — who are top prospects in the 2019 and 2021 classes.

Though ineligible next season, the Lawson brothers will be able to practice with the team all year, providing some tough competition for KU's rotation players on a daily basis throughout the year.

Some of the comment from the columns written by the National Sporrts press are less than flattering. One guy said the report from his NBA workout last year was the worst ever. Nevertheless, Kansas under Bill Self will get the most out of them.

We've had plenty of high-impact players at KU that didn't have skills that didn't transfer to the NBA (Perry being a prime recent example) so that really doesn't change my opinion of their skills/possible impact at KU. It's hard to argue with their stats. Rebounds don't just fall in your lap 8-9 times a game and they weren't just picking up 30 points a game purely from luck.

I am stoked to see them play. I saw this article on my Birthday 2013 about the family and thought it would be cool if they transferred to KU! Last night I was going through verbalcommits.com transfers and hilighted them. Freaked out this morning when I saw they did! Plenty of rebounds blocks and points from these 2. http://www.cbssports.com/college-basketball/news/dear-america-meet-the-lawson-brothers-from-memphis/

Under Self's guidance, they'll have a great opportunity to develop their skill sets even more.

Really think it's a great fit for both.

Add in a season of working out under Andrea Hudy's supervision before debuting in Allen Fieldhouse, and these two should really rock the Phog!

These guys need to work much harder than they have ever worked. Andrea Hudy needs to go off on them like a drill sergeant.

Will their scholarships count against our max while they are ineligible?

I don't think they do

Yes, Michael. That's why we really need to use our remaining scholarship(s) wisely. A big man for next year is crucial.

Ditto, Ryan regarding Tarik Black. I hope to see him back in Lawrence in some capacity, but I think his interests in helping youth in his home area will take precedent.

Black always seemed like he was working hard. Giving effort, playing tough. He wasn't an offensive machine but man you wanted a guy like him out there on the floor

The best part is that they have two younger brothers, Chandler and Johnathan, who might just be better than they are and will be ready for college ball in the next few years.