Notebook: Jayhawks not good enough on ‘money down’

Kansas football coach David Beaty likes referring to third down as the “money down.” In Saturday’s home loss to Ohio, his Jayhawks went broke on offense, going 0-for-8 on third-down conversions.

When reviewing the numerous issues that plagued KU in Week 2, as Beaty and his players prepare for their first road game of the season at Memphis, the head coach pointed to first-down ineffectiveness leading to money-down failures on both sides of the ball.

Ohio went 2-for-3 on third downs in the first quarter, and 3-for-7 in the second before finishing the game 9-for-22.

“Third down, we have got to be way better than 0-and-8 offensively and then we have to be better than 9-of-22 (defensively), because 9-of-22 in itself doesn't look terrible, but 5-of-6 early in the game, that will kill you,” Beaty said of a loss in which KU fell behind by 25 points in the first half. “You've got to get off the field early — 5-of-6 early, you've got to get off the field, and we had opportunities to do it, and we're the ones that did it.”

After suffering a 37-21 loss against Ohio, Kansas football coach David Beaty met with the media to talk about what went wrong in that loss, his decision to take coaching responsibilities on punt return, looking ahead to Memphis and much more.

Beaty said KU’s offensive struggles in the first half made things more difficult on the defense, but he refused to give the defense a pass for failing to force Ohio punts.

In the Jayhawks’ first loss of the season, junior Montell Cozart played almost exclusively at quarterback — a change from the previous week, when sophomore Ryan Willis got more reps against Rhode Island.

Against Ohio, Cozart completed 17 of 24 pass attempts for 198 yards and two touchdowns. Willis threw just five passes, completing one for eight yards, with an interception. 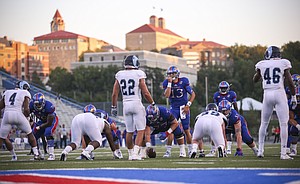 Kansas quarterback Ryan Willis (13) watches the clock deep in the Rams' territory during the second quarter on Saturday, Sept. 3, 2016 at Memorial Stadium.

“He took a couple of big hits in that game,” Beaty said. “I was proud of him. He stood in there and took some hits. He got hit right in the teeth a couple of times. A couple of them were just borderline — we might have gotten calls for it, which you'd like to see.”

Willis completed seven of nine throws for 144 yards and two touchdowns against Rhode Island in a win. Asked how he was handling his evolving role within KU’s offense, the sophomore responded: “Umm… I mean, it’s different. I don’t have much to say about it.”

Cozart certainly didn’t perform flawlessly versus Ohio while emerging as the clear starter. In particular, Beaty pondered how KU’s chances might have improved had the QB connected with a “wide open” LaQuvionte Gonzalez on one first-half throw that looked like a sure TD.

“He kind of got on me about that one,” Cozart said, “because he said, ‘We need that. We need that play. You never know what that play could’ve done for the rest of the game.’ And I feel like that play would’ve sparked us. No doubt. It was a big play and it was a play early on that it was a shot, and you don’t have that many shots in a game — and that one was there. So we’ve gotta take advantage of it when it comes up again.”

Beaty chose not to reveal Tuesday whether he would rotate Willis in at QB against Memphis (1-0).

‘Yoda’ joins The Dark Side

The 5-foot-6 field-goal kicker whom Beaty affectionately dubbed ‘Yoda,’ after the tiny Star Wars character, made four of seven field goals for the Jayhawks in 2015, with a long of 40 yards.

Cozart experiment needs to end. He is not our answer at QB. His reads are slow, leaving us little room to move the chains. We need to work our #2 & 3 options. Not sure why all the coaches keep giving him the starts!

Coach obviously has a plan for the QB position that does not include Willis. Now much of the fan base disagrees with this at this juncture, but he is the coach. He will make the decision and it will impact his future employment good or bad and not ours. Yes, I want Willis over Cozart but I am not the coach. I think we see Stanley before we ever see Willis again.

I think Cozart has improved greatly. I say stick with him. He's thrown some pretty good balls.

On the third down situation. I like the no huddle pass, pass, pass. Any play can get you a first down. Every play is a money down. Bank that.

Now, I was really critical last week after the first half on our defense. I was wrong. The only reason we were in the game was because our defense kept us in the game while the offense found itself. A defense alone can't win. I think overall our defense held on. I would have liked to see us do a better job of stopping the run bUT we got better as the game went on.

And if this is the most ugly game of the year, I think our year will exceed expectations. I had assumed the second half vs ohio was going to be more of the same. It was quite a turnaround. Had we not had a couple of turnovers we could have won despite the awful start on offense.