Second-year KU coach David Beaty chose to keep the identity of his team’s starting quarterback a secret in the days leading up to the season opener. Whichever QB Beaty decides to send out for the opening offensive series against Rhode Island, the signal-caller needs to get the year off to an encouraging start. Whether it’s sophomore Ryan Willis, redshirt junior Montell Cozart or Beaty surprises the masses by going with redshirt freshman Carter Stanley, beginning the game with a touchdown drive would help the players (and fans) forget about the program’s past struggles and prove this game and season won’t be quite as difficult to endure. Beginning 2016 on a positive note would only help the Jayhawks in the weeks ahead, as well.

“You know, winning cures a lot now,” Beaty said. “It cures a lot. And I think getting off to a fast start here would be a big, big deal for us. If I didn't talk about it or say that, then I would be remiss.”

The Rams’ offense this season obviously won’t be a carbon copy of the team that scored just 13.2 points a game in 2015, but the Jayhawks need to remind URI’s players of just how difficult it can be to move the ball down the field and put points on the scoreboard. Rhode Island scored 10 points or fewer five times last season, and KU has the athletes on defense to stymie their attempts to hang around and make this a competitive game. Three-and-outs, takeaways and negative plays for the Rams’ offense should be the goal for KU’s defense, even if the Jayhawks won’t put their specific objectives out for public consumption.

“I don’t necessarily have like statistics that we need to do,” junior linebacker and captain Joe Dineen said. “I just think everyone knows when the defense plays good. That needs to happen. We need to play well. We need to get big third-down stops, we need to keep them out of the end zone, keep them out of field-goal range. I think if we do that it will be a successful day.”

All offseason Beaty has raved about the impact special teams coordinator Joe DeForest has made, and preached the importance in winning that phase of the game in order for KU to become a more competitive program. From senior Matt Wyman’s kickoffs, to field goals and extra points (courtesy of either Wyman or junior Gabriel Rui), to the hangtime and distance on freshman Kyle Thompson’s punts, to returns and coverage, Beaty wants Kansas to master every aspect of special teams. For all the reasons to look forward to the debut, Beaty said for him one is to see if KU can play “clean” football.

“And do we understand that the three ways we're going to get better faster,” he added, “is by being the smartest team in the country and not going backwards, and not giving your opponent anything — winning the turnover battle and turnover margin — and then truly dominating in all the phases of special teams.”

There’s no better way for Kansas to establish some dominance and control the game from start to finish than by pounding Rhode Island’s defensive front early and often with successful runs. 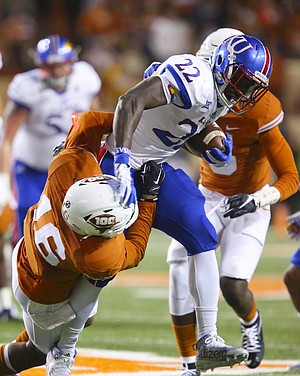 Senior Ke’aun Kinner, sophomore Taylor Martin, junior Denzell Evans and/or any other running back KU wants to put on the field should be able follow the offensive line to chunks of yardage and wear down the overmatched Rams.

An FCS program in the Colonial Athletic Association, URI won just one game a season ago and the roster doesn’t feature a whole lot of FBS-level talent. Captain and senior linebacker Adam Parker earned preseason CAA first-team all-defense honors. Parker might have 219 career tackles, but if Kansas negates the defensive leader for the Rams, who opened 2015 with a 47-0 loss at Syracuse (one of four victories on the season for the Orange), the visitors will be in for another lopsided road loss against an FBS opponent.

1. Up to this point, what is your top personal moment or highlight as a college football player? 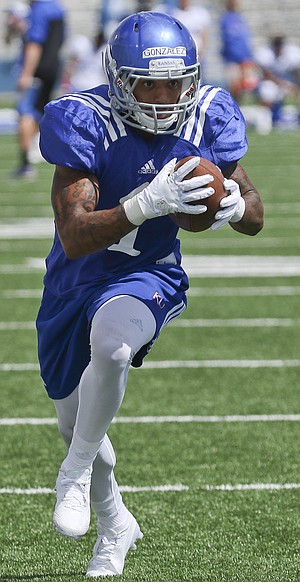 “I have to go back to the Alabama game (in 2013, freshman season at Texas A & M). The night before — or the day before — I woke up and I told my roommate I actually had a dream that I was gonna run it back on them when they kicked it off to me. And I actually could’ve run it back, but I made the wrong cut (on 65-yard return).”

2. How much more of an impact do you think you can make here than you were able to in two seasons with Texas A & M?

“I don’t really have a lot of expectations for myself. Just for this team overall. Try to get some wins. That’s really about it.”

3. Now that you’ve been in the program for a year, who have you connected with?

“Jace Sternberger, Steven (Sims Jr.) and my roommate Taylor Martin. Just play the game. Hang out. We mainly go play basketball. But it’s during the season now, so of course we won’t be doing that. We just go to the rec and hoop. Play against the basketball team sometimes.”

4. How would you describe yourself as a basketball player?

5. How can you use that same mentality as a receiver and make an impact on the football field?

The time to win — and win comfortably — is now. The schedule gets significantly more treacherous in the weeks ahead for Kansas. For everyone involved with the team, an easy victory against Rhode Island would signify a small step toward where Beaty wants this program to go. For those Jayhawks who have been here longer than their head coach, it’s their chance to experience a win again — for the first time since Nov. 8, 2014, when KU beat Iowa State at Memorial Stadium under interim coach Clint Bowen. It’s not only a day for Beaty to expunge “winless as a head coach” from his résumé, it’s a chance for this team to end a 15-game losing streak and make some headway toward earning some respect from its Big 12 peers.

I believe you may have not had enough coffee yet this morning. Rock Chalk! Lollollollol...

If the game is still in question in the 4th quarter, it may or may not mean much. But from a psychological standpoint, it would be a disaster for the players, and especially the fan base. We need a big win with everyone getting into the game to build some desperately needed TEAM confidence. Then, afterward, let's celebrate a little with an attitude there are more wins to come. No goalposts crap and no fans on the field. We might send some tweets out to thank the scheduling department for their work finding a badly needed cupcake for an opener. KSU opens with Stanford on the road, and we open with RI at home. That just about sums up where these two Kansas programs are and the distance between them as of today.

Humpy, maybe Beaty will announce the QB starter by the 4th quarter. Is he so fearful that an opposing coach will be able to game plan better? Is this indicative that all of the QB's are even or mediocre? Not much of a confidence builder it looks like. A win would be a baby step but a step none the less. I can't believe I am this excited.

Why do I not see Gabriel Rui on the roster here on kusports?

Any streams available besides ESPN 3 that is blacked out?