The 250 passing yards and season-high 204 rushing yards posted in a loss to Oklahoma State allowed David Beaty to call his offense an improved product this week. The reality of life in the Big 12, though, meant the University of Kansas football coach could hardly characterize the effort as a success.

As Beaty said following a 44-20 defeat at Memorial Stadium, the only number that really matters is the point total.

“We scored 20 points. Yeah, we moved the ball quite a bit, up and down the field. But we put 20 points on the board,” a frustrated Beaty said. “And I know we went for it on fourth down down there (early in the fourth quarter, behind by 14), but we were in a situation where we needed a touchdown there, and we felt good about the call (a Montell Cozart pass for LaQuvionte Gonzalez with the ball at OSU’s four-yard line), and we just didn't execute it well enough. We've got to be able to score more than 20 points. We've got good enough players to do that, and we've got to continue to execute and get better.”

In six consecutive losses, Kansas (1-6 overall, 0-4 Big 12) has failed to score more than 23 points. The Jayhawks only scored seven in losses at Memphis and Baylor. Beaty knows the offense has kept KU from pulling off an upset victory. Unprovoked, at the end of his post-game press conference Saturday, the head coach/offensive coordinator/quarterbacks coach made a point after praising starting QB Cozart (24-for-40, 250 yards, one touchdown, two interceptions versus OSU) to again hammer home his dissatisfaction with KU’s scoring.

The Jayhawks averaged 17.2 points through four Big 12 games. Beaty said they’ll have to find ways to put up 40-plus in this conference.

“We've got to score more points, though. Get that ball in the end zone so we can win a game, man,” Beaty said.

To his point about points, the top six scoring teams in the conference all average at least 30 an outing in Big 12 play, led by Oklahoma’s monstrous 50.2.

Senior KU running back Ke’aun Kinner rushed for 145 yards against the Cowboys. Referencing his own lost fumble in the midst of a tight game and the Jayhawks’ 25 lost turnovers this season, Kinner spoke of obvious ways to make the team more competitive.

“We just have to stop making mistakes,” Kinner said. “I mean, everything was working, everything was going our way (KU led most of the first half vs. OSU). We just didn’t capitalize.” 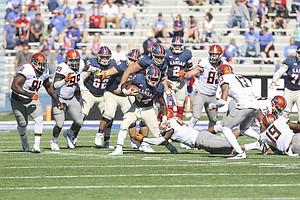 Kansas running back Taylor Martin (24) takes off up the field against Oklahoma State during the third quarter on Saturday, Oct. 22, 2016 at Memorial Stadium.

Cozart maintained his no-sack season and KU only lost six yards on rushing plays all afternoon.

“I think our guys are getting a little bit better, which is good,” Beaty said. “I’m going to have to watch the tape, but there was some real challenge thrown out to those guys this week. But I thought Montell did a nice job of not getting those guys exposed by getting rid of the ball on time, using his eyes. That's really how it can work when you do it correctly.”

The head coach revealed redshirt freshman Ribordy felt ill all Friday night, prior to the game, and even vomited on the sideline while battling “some kind of flu or something.” At one juncture, junior Gibson had to sub out and Ribordy filled in at center.

“And the dude was sick as a ghost, man. He looked like a ghost, he was so white,” Beaty said of the 6-foot-4, 290-pound freshman from Louisburg. “But I was proud of that dude because he never asked out one time. He's a tough kid.”

I don't have the numbers to back it but it sure seems like we are losing the battle of field position. We rarely seem to get a good return and whenever we receive a kickoff the returner can't seem to get it back to the 25 without a holding penalty.

Our next two games are at OU and at WVU - two leading contenders for the league championship.

If Beaty is not required to hire an O.C. for next season, both he and Zenger should be fired.

Don't think the losses are due to play calling, at least not the last two home games. Turnovers and mistakes is what's hurting them. That said I hope they go after an O.C. Will be extremely disappointed if Beaty loses his job.

Ive been vocal about the opinion that comparing games where Ryan Willis started (TCU and Baylor) represent a different caliber of team than those faced by Cozart. Ive been on record as saying some of the difference in performance is due to this. With the games coming up, Cozart will have a chance to prove me wrong and shut my mouth on the subject once and for all. Im going on record now, though, saying Cozart will have performances much worse than his outing vs. OSU, and worse than Willis' performance vs Baylor. Crazy? We'll see. (But Im handing you the ammunition to use against me in the event that Im wrong). In any event, it's always important, guys, when comparing quarterbacks, that you account for variables in such a way as to keep the comparison as "apples-to-apples" as possible. Nothing will ever convince me that Cozart is a better quarterback than Willis. Willis just lacks the experience level Montell has had. If he were availed of a similar advantage there would be no comparison to be made at all.

It's fair to note the different levels of competition. I'd argue that that it's difficult to make an apples-to-apples comparison, also, because Willis and Cozart are just two totally different types of quarterback, slot into our offense's sets of strengths and weaknesses differently, and create different types of challenges for those opposing defenses.

For example, the reason Willis has been sacked so many times isn't just because he's faced better defenses. It's also because Cozart is so much more elusive... and, for that reason, the opposing D has to scheme differently (effectively accounting for another running back in the backfield).

I hope Willis will be better than Cozart... Better at working through his progressions, better at looking off defenders (who, right now, just watch him lock onto the one receiver he plans to throw to), developing a better feel for the pocket, etc. And I hope whoever is next in line after Willis is better than him. But fit, given the current team's strengths and weaknesses, having a QB who can get the hell out of Dodge and scramble to turn a sack into positive yards... or extend a play to let a secondary receiver come open... or create problems for a D keying on the RB might be a better fit for the squad we're fielding right now.

You've been "vocal" about the idea that Perry Ellis and Harrison Barnes have the same skills, play the same position and have the same NBA potential.

Ellis was released yesterday. Barnes has a max deal.....

It's a corpse. Bury it already.

Maybe Joe's comment wasn't smart, but months later you're being a flaming idiot.

I don't remember you having the stones to take even that pathetic weak stance at the time.....

Sorry, as much abuse as Joe was willing to spew in defending that stupidity, he'll hear about it until he's man enough to apologize.

Joe you have every reason to make that claim but if Willis vs. TCU and Cozart vs. OSU are an apples to apples comparison I think Montell might actually give us a better chance at our 2nd win. Montell won’t throw for as many yards but he won’t turn the ball over as much and will not get sacked near as often. Granted much of my speculation is based on wishful thinking but using facts and logic just gets in the way. This is KU football after all.

If the offence could walk to class today I'd be shocked, they shot themselves in the foot on so many occasions.

Winning teams in the Big XII have to make the big plays and can't have the kinds of turnovers KU had on Saturday. The one int was just such a freak thing to watch, but that one was on the receiver, Big XII receivers HAVE to make that catch. That was on a scoring drive and would have had the Jayhawks in the red zone. The two turnovers deep in their own territory made it easy for a struggling OSU offence to put 14 points on the board.

KU had a chance to win this game, the defense had them in a position where a win was a possibility. Unfortunately, you can't let a team off the hook by giving up the ball deep in your own territory and that in part is what doomed the Jayhawks.