The Kansas volleyball team looked at times early in the season in opening sets at Horejsi Center as if it were operating under the pressure of trying to justify its lofty ranking, its homecourt streak of dominance, its status as a program coming off of a Final Four appearance.

Not the case in Wednesday night’s match against rival Kansas State. Not even close.

Kansas came out loose, confident and downright nasty on its way to 25-15, 25-20, 25-23 sweep of the Wildcats, making it eight victories for the Jayhawks in the past nine matches between the intra-state rivals.

K-State’s Katie Reininger scored the night’s first point with a kill. A few blinks later, Kansas had built a 9-1 lead by dominating at the net. 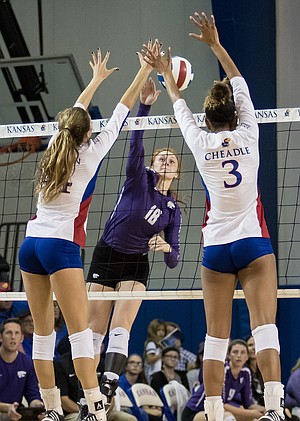 “We definitely worked on coaches hitting into us, running K-State’s offense, so I think we had a really good idea of what they were going to do,” Payne said.

Sweet music to a coach’s ears.

The flurry of points from blocks juiced the customary sellout crowd and the players themselves.

“I’d rather block somebody than get a kill any day,” Burse said. “I like it way better.”

Madison Rigdon watched it happen from the back row.

“That pumped everybody up,” Rigdon said. “That was super exciting. To go 9 and 1 was like, incredible. I was just back there like, ‘Yeah, guys, good job!’ I was chillin’ and they did a great job.”

Kansas has come to expect those sorts of performances, as well as smart decisions, sound defense and accurate passing from superior setter Ainise Havili.

Given that, the most significant development of the night might have involved the improved play from Burse, the talented freshman from DeSoto, Texas.

“Jada had maybe one error tonight,” Bechard said. “In a high-level match like this, for a freshman, we’re proud of her for sure.”

The Jayhawks wore “Root for Scoot” shirts in warmups to honor academic counselor Scott “Scooter” Ward, who is recovering from emergency heart surgery he underwent Friday. Bechard said the team tentatively is scheduled to visit Ward today at the University of Kansas Hospital.

Bechard explained why his team looked so motivated against the Wildcats (14-5, 3-3).

“You get to play at home, No. 1,” he said. “You get to play against an in-state rival, No. 2, and then you get to battle and fight hard for a guy that you love who’s making unbelievable progress himself. So all things thrown together is kind of a perfect storm for the Jayhawks.”

“Right now it just gives us more motivation since he’s doing so well and he’s such a fighter,” Payne said. “I think we key in on that and use him as a reminder that we need to fight just as hard as he is.”

Said Bechard of his close friend: “We get updates every day and we’re very in tune with how he’s doing and how he wants us to be as people and competitors.”

Ward certainly would have given the Jayhawks another passing grade Wednesday night.

Great to see ESPN U carry the game!