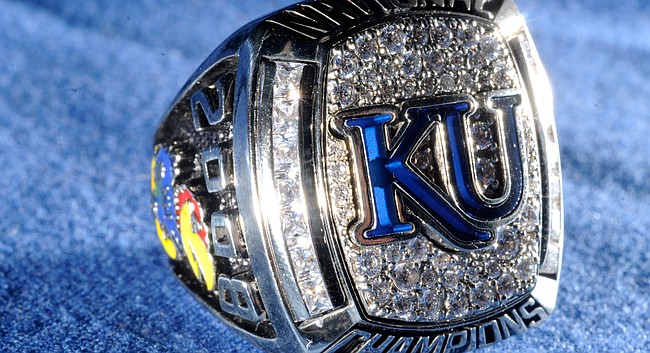 TOPEKA — The Kansas Court of Appeals has upheld the conviction of a Lawrence woman who stole two KU championship rings from her father-in-law and sold them for methamphetamine.

According to court records, in December 2013 and January 2014, Mandy Hurd and her husband at the time, Blake Hurd, were living with Blake Hurd's father, Timothy Hurd, facility supervisor for the Kansas University Athletics Department.

As an employee of the department, Timothy Hurd had received championship rings commemorating the KU Jayhawks' 2008 Orange Bowl victory and their 2008 men's NCAA basketball championship, which he kept in a dresser drawer in his locked bedroom.

At one point, Blake Hurd broke into the bedroom, removed the rings, and showed them to his wife. He later testified that he broke into the room looking for a pack of cigarettes. The couple then agreed to sell the rings for methamphetamine.

The theft came to light on Jan. 31, 2014, when someone contacted Timothy Hurd, saying he had been asked to buy the rings but wanted to know first whether they had been reported stolen.

Mandy Hurd was convicted of misdemeanor theft and was sentenced to 12 months probation. Douglas County District Court records do not show that Blake Hurd was charged in connection with the theft.

On appeal, Mandy Hurd argued there was insufficient evidence to show that she knew the rings were stolen at the time she sold them. She also argued that certain evidence should not have been admitted at the trial.

But in an unpublished opinion released Friday, a three-judge panel of the Court of Appeals rejected those arguments, saying there was ample evidence to show she knew the rings were stolen and that she was the one who sold the rings in exchange for drugs.

According to the opinion, Kansas City, Missouri, police recovered the Orange Bowl ring during a drug raid and returned it to Timothy Hurd. The NCAA basketball championship ring was also recovered at some point, but it had not been returned to Timothy Hurd at the time of the trial.

WOW!! I have no response to this article!! Although, once again it proves KU BBall is more valued than KU Football.