In Thursday’s Big 12 opener against Oklahoma, the Kansas women’s basketball team made five shots in the first three minutes.

Then the Jayhawks missed nine straight shots and never recovered in an 84-54 loss at Allen Fieldhouse. They missed shots in the paint, misfired on 3-point attempts and even missed 12 free throws.

“You can’t shoot 28 percent and expect to give yourself a chance to win,” Kansas coach Brandon Schneider said after his team shot 21-of-74 from the field in front of a crowd of 2,574, including former KU standout Danielle McCray. 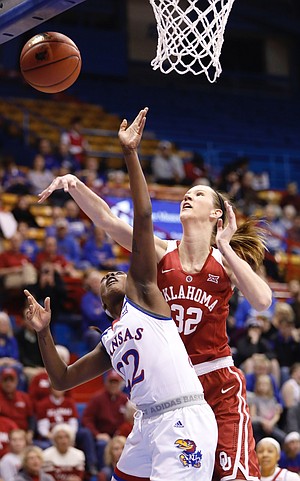 The Jayhawks (6-6, 0-1 Big 12) didn’t create much offense outside of junior point guard Jessica Washington, who finished with a game-high 22 points. She sat for eight minutes in the first half because of foul trouble, which helped spark a 19-1 run by Oklahoma at the end of the first period.

Not including Washington or sophomore McKenzie Calvert (13 points on 6-of-20 shooting), the rest of the Kansas squad was 7-of-38 from the field.

“I thought our energy level and those things was really good to start the game,” Schneider said. “We just didn’t sustain it. I think we let not making shots affect that a little bit.”

Kansas had trouble against Oklahoma’s defense, which featured 6-foot-9 freshman center Nancy Mulkey in the middle of the paint. Mulkey, in her first start of the season, blocked a career-high seven shots in 22 minutes, which doesn’t include the shots rushed on drives down the lane. She nearly recorded a triple-double with 14 points and nine rebounds.

“She’s a good presence in the paint for them, but we’re going to face big players like her throughout the rest of the season,” Washington said. “It’s just something that we’re going to adjust to and prepare for in our practices.”

Washington scored the first five points of the second half, including a reverse layup-and-the-foul bucket where she didn’t even look at the rim as she flipped a shot over her shoulder. When Washington dished an assist to Calvert for a 3-pointer on the next possession, it cut the score to 44-39.

But the Jayhawks wouldn’t pull any closer after missing 14 of their next 16 shots. The Sooners (10-3, 1-0), who played without starting point guard T’ona Edwards (suspension), finished the third quarter on an 11-0 run for a 24-point advantage.

Washington, who scored a career-high 27 points in last week’s overtime win over UC Riverside, was dominant in the second quarter with 11 straight KU points.

“Jessica Washington was fantastic,” Oklahoma coach Sherri Coale said. “We couldn’t do much with her.”

Schneider said he considers sophomore Kylee Kopatich (seven points, nine rebounds and four assists) to be one of the top three options on offense alongside Washington and Calvert, but her shot just wouldn’t drop through the rim despite open looks from beyond the 3-point line.

He was proud of the way she contributed in other ways, but nobody else stepped up to fill in for her on offense.

“The problem is in this league, not only are those three going to have to play well and shoot the ball 40 percent or better, but we’re also going to have to get something from our front line,” Schneider said. “We didn’t get that.”

The Jayhawks will travel to No. 3-ranked Baylor at 2 p.m. Sunday.