Kansas State guard Ashia Woods (23) shoots against Kansas forward Caelynn Manning-Allen (25) during the first half of an NCAA college basketball game in the first round of the Big 12 Conference tournament Friday, March 6, 2015, in Dallas.

Dallas — Kansas University rallied from a 13-point first-half deficit to take a late lead, but Kansas State came up big down the stretch for a 57-49 victory Friday night in the first round of the Big 12 women’s basketball tournament. 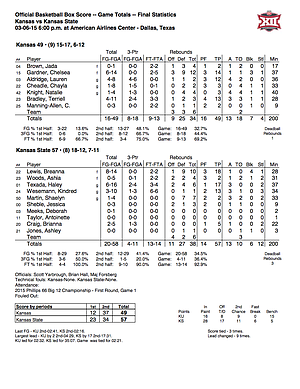 “We’ve done that all year,” KU coach Bonnie Henrickson said about the Jayhawks’ comeback. “Honestly, we’ve done that all year, and we’ve won some and we’ve lost. We were down 17 at Texas Tech, we’ve been down before, we’ve come back, but there were probably about four of those that we’ve not. It ends up being a one-possession game. Certainly I think we’re that team that makes the run. It’s hard for me to believe we’re that team that does that in the first half, quite honestly.”

The Jayhawks trailed 23-12 at halftime and shot only 13.6 percent in the first half.

“So you miss point blank, you’re focused on something, it’s not making shots,” Henrickson said. “Focus on how to make it. Honestly, I told them we’re probably lucky we’re not down 30.”

KU fell to 15-17 while K-State improved to 18-12. The Wildcats will face Baylor in the quarterfinals at 1:30 p.m. today in American Airlines Center.

This should be the final chapter of a decade of mediocrity under Bonnie Henrickson. Perhaps the most overpaid women's college basketball coach in history. Her record of average at best to bad at worst coaching is unmatched. She has been grossly overpaid for a decade. Goodbye to Bonnieball.