Kansas guard Lagerald Vick (2) pulls up for a jumper against Loyola guard Andre Walker (2) during the second half, Tuesday, Dec. 1, 2015 at Allen Fieldhouse.

Cheick Diallo wasn’t the only Kansas University freshman to deliver a crowd-pleasing dunk (or three) in Tuesday’s 94-61 nonconference basketball rout of Loyola Maryland in Allen Fieldhouse.

First-year player Lagerald Vick, a 6-foot-5 guard from Memphis, showed his freakish athletic ability by skying to retrieve a missed layup by Sviatoslav Mykhailiuk, hang in the air and throw one down with 4:10 to play.

“Just running the floor and following up the play,” Vick explained of his technique on his slam in a game in which the 6-9 Diallo had three jams and 6-5 junior Wayne Selden, Jr., two.

“I saw the ball coming off, grabbed it and put it in. It just feels amazing,” Vick added of the sensation of giving KU an 85-54 lead and displaying some of the athleticism he’s known for before 16,300 onlookers.

“Always keep running and having energy,” Vick stated of his preferred style of play. “I’m trying to be a lockdown defender. I’m working on that part and letting the rest of the game come to me.”

Vick — he averaged 26.0 points and 11.0 rebounds a game his senior season at Memphis’ Douglass High — has scored 14 points while averaging 10 minutes per game in four games. He’s hit six of nine shots, including one of four three-pointers. Vick has also made one of four free throws and has four assists to five turnovers.

“I see myself getting better,” Vick said. “Becoming a defender, getting stronger, just listening to the older guys. I get along with the team very well. I like being around the guys. I would say Jamari (Traylor) has been a mentor. I’m listening to him every day at practice — him and Wayne (Selden, Jr.) But I hang out with Carlton (Bragg, freshman) a lot.”

KU coach Bill Self has been pleased with the progress of Vick, who averaged 4.5 points and 2.3 rebounds in eight games last summer for KU’s gold-medal winning World University Games team. He shot 51.6 percent from the field including 57.1 percent from three during the Games. He hit two of three treys, scored eight points and had six boards in a win over Brazil. Also, he had 11 points off 5-of-8 shooting with seven boards against Switzerland.

“He’s quick,” Self said. “The more I study him I say, ‘Gosh is he going to have an unbelievable body.’ He’s so long and sleek. He reminds me so much of a kid at Tulsa, Eric Coley, tough guy, same kind of build, big hands, long — kind of a Kawhi Leonard deal.

“He’s going to be terrific. I’m pleased with his development so far. There are not a lot of guys quicker than him. He could be a really good defender.”

As far as the other frosh dunker, Diallo, Vick said: “He was a little nervous playing in front of 16,000. I told him, ‘Defense first and offense will come.’’’

“We took a step in the locker room. Everybody checked themselves,” Vick said, no pun intended. “We came out with a different aggression to the game. We took advantage of what we can do.”

Carmelo-driven: Diallo, by the way, talked more about one of his three dunks — the one in which he put his left hand behind his head while flushing the ball through the hoop — on KU’s postgame radio show.

“It was a ‘Carmelo move,’’’ he said of Carmelo Anthony. “I used to do it in high school, Jordan Brand Classic, too. The ‘Carmelo move.’’’

This guy is a steal deal. Vick is vicious on a court. It's really refreshing to finally see dunks in KU games these days. We need to recruit more guys like Vick. He's making adjustment. Made some bad passes, but he's hungry - just look at those eyes. Give him 1/2 season, I expect him to soar higher by Feb/March. He'll be more comfortable by then, especially if HCBS gives him more minutes. Sounds like he begins to trust Vick.

Vick wanting to run the court and be a lock down defender. Yippie! Love your "vicious" wording, Steve, it got me pumped up!

We are really going to need Vick....next year.

Yes we are... Andrew Jones dropped KU from his final list of schools. Vick is going to have a needed plus what I believe will be a great career at KU.

Harvard has a top 35 recruiting class.. Maybe if we beat them bad enough, we can steal some recruits AND keep our scholarships.

Marius that drops the available list of top 100 players we have a chance for next year down to 5. Since we are not offering 3 of the others. Stunning.

Suzi you are right we need everyone we can get for next year.

Harvard has a top 35 recruiting class... Maybe we can beat them bad enough to steal a few recruits AND keep our scholarships.

I heard the interview with David Lawrence and he was saying Karl Malone. They misunderstood him. That's the first thing I thought of was the Mail Man. 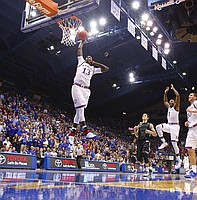 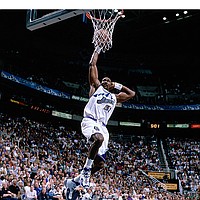 We made it a point to attend his debut and elated that he appears to be everything hoped. Self hit it on the head saying he was raw but geez is he talented and energetic! He goes for every block and the others have to rotate down to cover, especially underneath. I doubt we will see many +20 games due to his aggressive play resulting in fouls.

This team is a lot of fun to watch but we need to be able to hit FTs and finish at the rim to win the number 12 and advance in the NCAA.

Oh, I am TOTALLY trolling Suzi for what she said about Cheick a few weeks ago, here's a recap of her comments, again:

"If this is the kind of representation Diallo seeks, I don't care if Diallo ever wears a Kansas uniform. I am thoroughly sick of "The Big Lie" and the politics of divines and envy perpetuated by the Obama Administration and their race hustlers. If Diallo succeeds using this argument, I won't attend any KU games Diallo plays, even the NC should we be fortunate to reach it."

And now she says "we made it a point to attend his debut". In the immortal words of The Wire character Clay Davis... SHEEEEE-IT!

Fortunately nothing more was said on this. Self and the administration did a great job and handled the manner like professionals.

You imply that you expected something different from the KUAC than professional behavior. I'm sure that they are happy that they passed your behavioral test.

Diallo's attorney did not say anything more.

I thought that we had gotten rid of the political commentary on this site. You deserved to be trolled on this one, Suzi. It's all about self-control.

Brett, you're not innocent.

It's all about discipline.

The comments by the lawyer were political and highly offensive.

It's actually as much about poor manners as it is a lack of self-control which, I suppose, are connected.

Back off Brett. Don't be an jerk.

Let it go... Disagree on posts without making it personal. I'm not innocent either but it gets old.

I am not interested in drawing into a debate with you unlike others here. But my question centers around the fact that evidently there was no direct connection between Diallo and his guardian's attorney, and your insistence that you would not attend any Kansas games because of that "connection" was very firm. Obviously you feel differently about Diallo now, and so Im asking just out of curiousity (again NOT in a combative/debating position) whether or not you regret your earlier comments made about Diallo.

Vick is a freakish athlete. Exceptionally long arms, great lift and very fast. He certainly has all the attributes to become a great on ball defender. The one area, in my opinion, that he needs to focus on is the mechanics of his jump shot. His release is low, from in front of his chest or face, negating some of his lift and ability to rise above his defender for a clean look He is 6'5" and an adjustment to his release point will allow him to be able to get the shot off over any defender. It would also appear he needs to keep his right arm straight and close to his body upon release. Watch him in warm ups on his perimeter shot and see what you think. I realize my opinion is often not what others observe or perceive.

After stating the above, I noticed the picture of his release of his jump shot was a high release and the right arm was tucked close to his body and proper in all respects as far as form. I think this was at most a 10' to 15' jumper.The lower release is more apparent on his jumper near to or past the arc.

Love Vick and love his focus on defense - it's a great way to get yourself on the court.

If Vick can develop into a lock-down defender, then he'll add a dimension that is one of the most potent in the college game. A skilled 6'-5" defender can create havoc in so many ways - taking out your best scorer, altering 3pt attempts, snaring defensive rebounds, etc. When you think of some of the specific types of playesrs who can alter games, you think of the long-range bomber, the interior shot-blocker, the slashing point guard and, I would add, the long versatile defender.

In Bill Belichick terms, if you have a guy who can take away the other teams best outside weapon, then you force the team to try and win another way. Vick has a long way to go, obviously, but how nice it would be to have him develop into that dominating defensive presence. Sounds like he has the right frame of mind and the athleticism to make it happen.

"Love Vick and love his focus on defense - it's a great way to get yourself on the court."

I love watching guys as freshman and thinking about what they can become if they stick around. Legerald doesn't elevate on his jumper the same way Ben did so he's going to have a harder time getting his shot, but he seems to have the same athleticism and frame as Ben McLemore. If he builds on his frame with Hudy, he could be that guy by his junior year if he gets consistent minutes next year. If he buys in and grows here like so many people have in the past, he could be leaving for the league in a few years. It's gotta be humbling, even a bit of an ego bruise to go from averaging 26 a game in high school to getting 5 minutes on a good night, but put in your time, LV. We can't wait to see you become a stud.

I like the Ben McLemore comparisons for sure. And remember that B-Mac had to sit a year and work on his game as a redshirt FROSH along with Jamari. I think Vick will be very good in a year or two!

I think the best part about Vick, is what happens when he really figures out who he is. And as folks have pointed out, if he defends like crazy, Self will give him the playing time. We're still aways from where he'll be, but seeing flashes of it is fun.

Senior Graham and Junior Vick playing side by side in 2 years would be a very nice back court with good speed, length, and scoring ability, especially if Svi is still around to play the 3! Heck even Sr Mason, Jr Graham, and Soph Vick next year should be great.