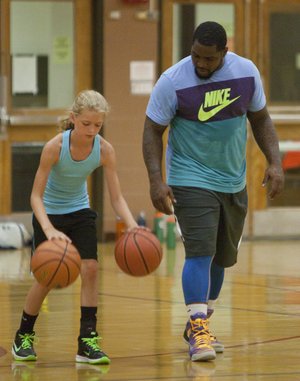 Former Kansas University point guard Sherron Collins says his basketball career is far from over at the still-young age of 27.

“I’ll be playing somewhere this year. I have a couple offers. I’m going to try to see what’s out there. I might try the (NBA) D-League. If it doesn’t work out, I might go overseas. I’ve got some good things in front of me. I have a couple offers, so ...,” Collins said, his voice trailing off in a recent interview from Cole Aldrich’s basketball camp in Robinson Gym.

The 5-foot-11 Collins — who graduated from KU in 2010 as the fifth-leading scorer and eighth overall in assists in school history — played for a short time with the NBA’s Charlotte Bobcats in 2010-11.

He’s also competed in the D-League and in Turkey. His current comeback plans have faced some obstacles courtesy of hamstring and knee problems. Collins, in fact, reported on Instagram last week that he had a “minor” surgical procedure on his knee.

“I feel for him. It’s frustrating,” said Aldrich, who has played in the NBA four years since teaming with Collins for quite an inside/outside punch on a 33-3 Jayhawk team in 2009-10.

“It’s something his mind is so strong on doing it, but his body is not enabling him to,” Aldrich added of his buddy playing pro ball. “He hurts an ankle or a knee or whatever it is. He has to get himself right, take the time needed because that’s what really is important. Once he gets his body right he’s going to be good.

“I look forward to seeing that time ‘cause playing with him, he’s a bad boy when he’s good. When he’s injured, he’s another guy. He has to get his health right. I think he can still do a lot of good things.”

Aldrich says Collins is a natural in terms of lending his expertise to young athletes.

“He’s great. He was out there dribbling, doing all that stuff with the kids,” Aldrich said. “He’s one of the best dribblers with one of the best handles and has a lot to teach kids.”

Collins in fact has decided that coaching is in his future.

“Yeah, I mean whenever I decide to hang it up, I’ll definitely go into coaching,” Collins said. “I’ve just been around coach (Bill Self), seeing him work with guys. There are a lot of players who left here who decided to try to coach. I think that’s what I’ll do.”

A native of Chicago, Collins says he’s been splitting his time between Lawrence and the Windy City.

“When I need to get away and stuff gets frustrating or if I need to just concentrate on basketball I come here and can concentrate no problem,” said Collins, whose last playing weight was listed at 215. He appeared to be at least 20 pounds over that.

“It’s bittersweet,” he added, asked if he misses his college days. “You don’t miss the classes, but you miss playing. You miss the fans. You miss coaches, past players. You miss those moments, sharing with those guys, but you only get four years. That’s the bad. We all know that.”

Collins, who played on KU’s 2008 NCAA title team, figures to be immortalized at some point, his jersey hung in the Allen Fieldhouse rafters.

“I have not even thought about it actually,” Collins said. “I think there’s a five-year (waiting) period, which I know is coming up for me. Honestly I don’t know. I think coach is waiting for me to start back playing somewhere. I definitely think I’m worthy to get my jersey hung with the greats. I think it’s coming. I’ll be waiting on it,” he added, smiling.

Diallo likes KU, ISU: Cheick Diallo, a 6-9, 220-pound senior forward from Our Savior American in Centereach, New York, who is ranked No. 5 nationally in the recruiting Class of 2015 by Rivals.com, is currently focusing on five schools — KU, Iowa State, Kentucky, St. John’s and Pittsburgh, Jeff Borzello of CBSsports.com reports. KU and ISU are believed to be the leaders.

I support all KU players past and present, but seriously Sherron, get a nutritionist and learn how to eat right. Injuries aside, his inability to keep his weight down has been the reason he can't stay on a team. It's a shame too, because he is such a great player. I loved watching him barrel towards the basket with reckless abandon and somehow get the ball to go in. Such a beast. Here's hoping he can get healthy and make a comeback. He's always had the talent and heart.

He looks more like a boxer then a basketball player .. sad.. but I know if he is going to compete he will get into shape ... maybe.

....at least 20 pounds overweight! We all only get one shot at life and Collins pro BBall/NBA shot is passing him. By the way, my hopes to win the power ball lottery are far from over. Unless Collins gets serious both our statements have equal chances of reality.

Sherron was overweight when he first came to KU. I remember because once he became a starter, not a game went by that the commentators didn't mention how improved he was now that he'd dropped the weight.

If he gets healthy, I'm sure he can do it again. It's easy for an athlete to get into shape if he's healthy and motivated. Here's hoping he'll soon be both.

Diallo's recruitment has picked up with a vengeance. Kentucky has pulled out all the stops and appears to lead for his services. Self will not back down, however. Could be one heck of a battle.

The only professional league Sherron looks ready for is the Competitive Eating League.. Wow.

I'm checking to see if he was in the hot dog eating contest against Joey Chestnut. My sources haven't confirmed it yet.

My favorite jayhawk ever. Loved how he played the game.

I just wish he had more discipline in taking care of his body.

One of my favorite Jayhawks . Looks more like a fullback or linebacker than a bb player. He may not be at an ideal basketball weight , but dude don't look fat or obese , just bigger than what we are used to seeing him look like. Look at some FBs and LBs on some NFL rosters that are anywhere from 5'10" to 6'0" and look at their weight. So they are fat too ?? People need to look in the mirror and quit insulting the guy. Did he likely miss some opportunities because he couldn't keep his weight down ? More than likely yes , but we don't know the whole story or his situation so why continue to put the guy down. He did graduate from college , more than what some of those putting him down can say. Pretty pathetic if you ask me...

"we don't know the whole story or his situation"

You are very correct with this, and I agree that he's not obese. What we are seeing now is Sherron's true body type, rather than his 18-22 yo body. Sherron will never again look like he did in college because his body has matured. He likely can get serious about working about and drop 15 pounds in a month or so, but he'll never be 215 again, and he'll never be an NBA player.

His body has matured and I think that his brain is much more mature as well. I believe in Sherron that he's making wise choices at this stage in life and just because he'll never look like he did in college doesn't mean that he can't make a good career playing pro basketball for the next 5 years or so if he's dedicated.

He needs to stay away from Chicago. For the longest time I've felt there are not enough people there with his best interests in mind. His quote in this article basically confirms that thought.

Right on Dale and Nick!!!

Haters need to go be fair-weathered K-State, UNC or Kentucky fans. Those aren't true KU fans. Sherron gave us his heart and soul for four years. People on here making fun of him are pathetic and tacky.