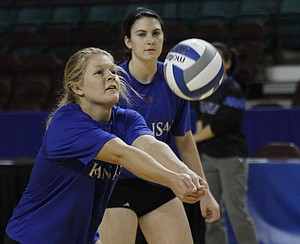 Kansas University sophomore Cassie Wait and members of the Jayhawks volleyball team practice Thursday at the Topeka Expocentre where they will host Arkansas-Little Rock in a NCAA regional game Friday.

Kansas University sophomore Cassie Wait always figured she would wind up playing the libero position in college. She just never expected she would find so much success quite so quickly.

Wait, a former pole vaulter and outside hitter at nearby Gardner-Edgerton High, earlier this year joined an exclusive club when she became just the third player in KU volleyball history to record 500 digs in a single season. The first was Catalina Suarez in 1984 and the second was recent KU star Bri Riley, who did it in both 2012 and 2013.

That Riley was the libero Wait was asked to replace only made her 534 digs and 4.74 digs-per-set average (third all-time at KU) more significant. That she achieved such a milestone in the first place was a direct reflection of everything she learned from the KU graduate now attending nursing school in her native Chicago.

“It’s awesome I got 500 digs (534) and I think that’s really, really cool,” Wait said before a recent practice as the Jayhawks began preparation for tonight’s 6:30 p.m. match against Arkansas-Little Rock in the first round of the NCAA Tournament at Topeka’s Expocentre. “But I don’t think about it much because I saw what Bri did last year and it just seemed like that was what was expected.”

KU coach Ray Bechard said he and his coaching staff expected to be in good shape for years to come at libero when they received a commitment from Wait, who also considered Kansas State and came from a family of die-hard Wildcats. That commitment came in January of her junior year at GEHS, and Wait said the culture shift that Riley and her crew helped bring to KU volleyball was all she needed to see to pick the Jayhawks.

Riley still remembers the first time she met Wait. After months of jabs from the coaching staff about how she needed to stay on her A-game or else the new girl would take her job, Riley saw Wait play and realized they were right.

“She’s really tough,” Riley said. “I thought I was tough and that’s something I took pride in, but when she came in I was like, ‘Dang, that girl’s not afraid of anything.’”

The funny thing was, Wait actually was intimidated about everything she walked into. She just had that athlete’s knack of finding a way to not let it show.

“I hadn’t been a libero before I got here,” Wait said. “And it was such a building year for me. I was just learning so much more about the game that I didn’t know.”

So she did what any good underclassman does and stuck close to the veteran leader who played the position ahead of her. She mimicked Riley during drills in practice, talked to her about the nuances of the position after practice and fine-tuned her understanding of what it took to play college volleyball by watching other teammates and listening to everything her coaches said. In short, she became Riley’s mini-me.

The two got along so well during their one year together that it never became a problem. In fact, Riley said Wait’s presence was critical in helping the Jayhawks reach the first Sweet 16 in program history.

“When she first came in, the coaches kind of told me to take her under my wing,” Riley said. “But the first time I saw her, I was like, ‘She doesn’t need me.’ She fit right in. And she really challenged all of us, which was awesome. We were used to challenging each other, but it was nice to have someone else come in and push us, too.”

That experience, along with the chance to step into more of a leadership role last spring and summer, helped Wait hit the ground running when the 2014 season began.

“She’s been unbelievable,” Bechard said. “Way under-appreciated. We lost an unbelievable character kid and performer (in Riley), but that’s been a seamless transition.”

The best part about that fact is that Bechard truly believes what Wait accomplished this season in filling in for Riley is only the beginning for the 5-foot-8 firecracker whom Bechard called a “full-contact” libero.

“We thought she could be really good,” Bechard said of Wait. “And just from a physical standpoint, Wait’s in a league of her own. We haven’t seen the best of her yet and it’s going to be a lot of fun to see how she continues to develop.”

With seven new faces replacing a group of outgoing seniors who had as much success as any class in KU volleyball history, repeating the feat of hosting opening-round NCAA Tournament matches for the third year in a row seemed like a tall task at the beginning of the season. But thanks to Wait picking up where Riley left off, freshman setter Ainise Havili having an all-Big 12 season and returners Chelsea Albers, Sara McClinton and Tayler Soucie pacing the KU offense, the Jayhawks are right where they want to be.

“When we hit our little rough patch it was kind of like, ‘Whoa, what’s happening,’” Wait said of the team’s early-season struggles.

With a win tonight, the Jayhawks would advance to Saturday’s second round, where they would meet the winner of the match between Creighton and Oregon State (4 p.m. today) with a trip to next week’s Sweet 16 in Ames, Iowa — and a likely meeting with the tournament’s top overall seed, Stanford — on the line.