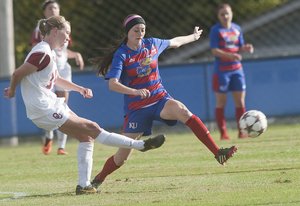 Jamie Fletcher’s second goal of the night — with less than 90 seconds left in regulation — lifted Kansas University to a 2-1 victory over Oklahoma and into the Big 12 tournament.

Fletcher’s goal Friday at the Jayhawk Soccer Complex gave KU the eighth and final spot in the Big 12 tournament, which runs next week at Kansas City’s Swope Park Village.

“The kids battled and fought really hard, especially in the second half,” KU coach Mark Francis said. “A lot of credit goes to Oklahoma. I thought they played well and really took us out of what we were trying to do. We gave ourselves a chance though at the end of the game and Jamie scored on the header and it was all over at that point. I’m just happy for the kids, especially the seniors, that they still get to play.”

The Jayhawks struck first. In the 29th minute, a fight for the ball in front of the OU goal resulted in a Caroline Kastor shot that was deflected to the foot of her teammate Fletcher. The Albuquerque, N.M., native managed to get a shot off just as she was tackled by an OU defender. Fletcher’s strike sneaked inside the left post to give KU the early lead and earn the junior her second goal of the season.

The Sooners dominated possession in the second 45 minutes of play, seeing chances early and often throughout the final period. Oklahoma doubled the Jayhawks’ shot count in the second half with 14 shots and managed to tally seven of its 10 corner kicks in the second half.

With OU again on the attack in the 75th minute, the Sooners sent in a long ball in toward the far post of the KU goal. Freshman Caren Nelson and KU goalkeeper Kaitlyn Stroud collided inside the six-yard box as they were both vying for the ball. With the ball loose inside the Kansas penalty box and the KU goal unguarded, Oklahoma’s Daisy Cardona kicked in her sixth goal of the year through the open KU net to knot the score with less than 16 minutes to play in regulation.

The Sooners continued to attack over the next 10 minutes, but the Jayhawk defense continued to send the OU attacks the other way. In the 86th minute, Kansas sent a ball forward to Kastor, who sped by the back line of defenders and had only Sooner goalkeeper Kassidie Stade to beat. As Kastor was attempting to divert the freshman, Stade took her to the ground, which prompted the referee to pull his red card and send OU’s starting keeper to the bench.

With the Sooners forced to play a man down in the remaining four minutes of regulation, Kansas saw its chance to send in the late go-ahead goal. With 1:22 left, junior Hayley Yearout sent in a corner from the right side. The on-point pass found the head of Fletcher from five yards out, and she flicked the ball in through the high-left corner of the OU goal.

The assist was the second of the season for Yearout and the fifth of her career.

KU has qualified for the Big 12 Championship 13 of the 15 seasons of Francis’ tenure in Lawrence.

The Sooners shredded the Jayhawks in almost every statistical category, including shots, 22-12, including a 12-5 edge in shots on goal.