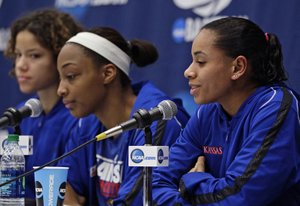 OK ladies-- Believe me there are lots of fans following you. Hopefully a bunch show up tonight to cheer you on to another victory. Next stop New Orleans!

You can do it, ladies. Give it 100% and you're winners, no matter what happens.

I live in SC and have seen them several times this year. Tough matchup, as they have 2 forwards and two guards all averaging around 10 points. Balanced attack, very physical. I'm sure their coach would like us to focus on stopping their point.

These KU women are no slouches on defense either, when they play with energy and the bench plays with even more energy. Neither point guard is going to be "stopped." The winning team will be the one best controlling play at the point and hitting the boards hardest.

Watching on tv, something I sadly only take the time to do once or twice a year... Hoping for a win and another chance to watch the seniors. RCJH!

Great win for the KU women!