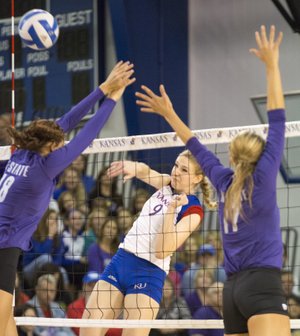 Kansas' Caroline Jarmoc (9) hits a shot down the line, avoiding a pair of Kansas State blockers during their volleyball match Wednesday, Oct. 17, 2012, at Horejsi Center.

Jarmoc had career highs in blocks in a victory over Kansas State and in kills in a win over TCU. The victories propelled the Jayhawks (19-3, 7-1 Big 12) to a program-best No. 8 RPI mark and to No. 17 in the AVCA Division I Coaches poll. She was named Big 12 Defensive Player of the Week on Monday, making her eligible for the national award.

Congratulations, Carolyn. You're the best!