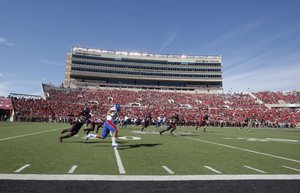 Lubbock, Texas — With life on the road being awfully unkind to the Kansas University football program during the past few seasons, KU coach Charlie Weis altered KU's travel plans this week in hopes of fielding a more focused football team during Saturday's game against Texas Tech.

Rather than bringing 70 players, which is the maximum number allowed by the Big 12 Conference, Weis trimmed KU's travel list to 54 on Saturday. Most of the guys who missed the trip were younger guys who probably would not have played anyway. However, there were a couple of regulars who were left in Lawrence, most notable among them being junior wide receiver Christian Matthews and red-shirt freshman offensive lineman Damon Martin, who, during recent weeks, had elevated himself to starter status at left guard.

Although Weis' change of plans did not change the outcome — KU fell, 41-34 in double overtime — KU's first-year coach seemed pleased with the effort put forth by the 54 guys who made the trip south for KU's second-to-last road game.

"This was about going on the road with guys that really, really care," Weis said. "It's important to them. I'll take that group of guys that played today and give us a chance whenever we're playing."

During most weeks of the 2012 season, the KU defense has taken its lumps early but ironed out the wrinkles quickly and delivered games both Weis and defensive coordinator Dave Campo could be proud of.

"We just settle in," senior safety Bradley McDougald said. "The beginning of the game is the toughest, and that's why coaches thrive on getting off to a fast start because it boosts you and gives you momentum."

McDougald said KU's early in-game communication — from coaches to players and players to players — had been a strength of the defense throughout the season and that, again, was the case Saturday, as the Jayhawks limited Texas Tech's explosive offense to just six points from the 12:20 mark of the second quarter to the end of regulation.

McDougald's interception of TTU quarterback Seth Doege was his third of the season and provided the KU defense with a huge shot of confidence.

Weis would've gone for it

Whenever overtime games occur in college football, fans and analysts seem to enjoy speculating on whether a coach will or will not go for two after a score.

Although KU took the lead by scoring first in the initial overtime, Weis said rolling the dice at that point was not right. His mind changed quickly, however, when KU found itself driving for a catch-up touchdown in the second OT.

"I was going for two if we scored there," said Weis of KU's possession in the second OT. "I told the defensive coaches, 'This is gonna be it either way. Because if we score, we're going to try to end this right now.'"

It never happened, of course, as KU's final drive stalled when a Michael Cummings pass to the end zone on fourth down was batted down.

Midway through the third quarter, with Tech leading KU, 21-17, television cameras caught Texas Tech coach Tommy Tuberville engaging in an altercation with an assistant coach on the sideline in which Tuberville appeared to strike the coach with his left hand, knocking off his hat and headset.

After the game, Tuberville explained what went down.

"Oh, I reached and grabbed him," Tech's third-year head coach said. "He was on the field, and I reached to grab him to pull him off. It wasn't anything to it. It was just one of those deals where I missed his shoulder and ended up grabbing the microphone on his headset and pulled it off."

The Jayhawks won Saturday's opening coin toss for the first time in four weeks. The Jayhawks deferred their choice to the second half, and Texas Tech elected to receive the opening kickoff. ... Red-shirt freshman offensive lineman Luke Luhrsen made his debut for the Jayhawks. ... The double-OT loss was KU's first overtime game since falling to Baylor, 31-30, in overtime last year in Lawrence. KU is now 3-5, all-time, in overtime games. ... Temperature at kickoff was 68 degrees, under partly cloudy skies with winds of 24 mph out of the south.

Why wouldn't we bring Damon Martin? My guess on Christian Matthews is that Weis already knew Cummings runs almost as well as Matthews as we learned today. I'm surprised Matthews hasn't made any impact at WR though.

My guess is there was an effort issue at practice or in class this week.

"guys that really, really care," would seem to indicate it wasn't nearly as much about game planning or anything like that. This is more likely a general motivation issue to get guys focused on the details of winning. People may joke about the "celebration" rant from the summer/spring/whenever, but it's all intrconnected about the psychology of winning.

Tuberville is a chump

True about the screw ups, but wrong about Tuberville. He is a liar, when he says he grabbed at him because he was out of bounds. He slapped at him, pure and simple and he should be suspended. I'm sure glad we didn't get him as coach. What a loser.

I love this. "Sorry, you won't be traveling with the team this weekend."

Sends a solid message, reminds the players who is in charge and if someone has been giving bad effort, exhibiting bad attitude, being a bad teammate, etc., the message should be crystal clear.

Charlie gets it and knows what he is doing.

Patience. Stay the course. We are getting there.

I agree 100%.... to the naysayers, believe it or not, though our record doesn't reflect it, we've got a better coach, and our team is playing the best football it's played it years! Last year, when KU lost, we lost BIG, and it didn't hurt as much to lose because you knew what was coming. This year, it hurts to see KU lose because we fight now. Can't wait for Iowa State game, and can't wait for next year.

I can see why if you are only taking 54 you take people who can play if needed. The plan is to redshirt Baty this year.

I think Jablonski is also the holder for the field goal unit. No reason to give Prolago something else to adjust to.

Baty will & should red shirt with only 2 games left

Hopefully Baty will a solid two-year backup to Heaps. That said, he and Cummings will be in a good old-fashioned QB competition, and Heaps will be on notice that if he fails to perform Weis won't stick with him for half the season like he did for Crist.