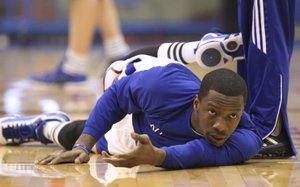 “It was loud,” said Jones, who finished with 18 points to lead Baylor. “It was the loudest place we’ve played in, and their fans really got into the game. We tried our best to stay together as a team and not let the noise affect us.”

Known for providing the Jayhawks (15-3 overall, 5-0 in Big 12) with one of the best homecourt advantages in college basketball, the fieldhouse fans took things to a new level Monday. With the excitement of ESPN’s Big Monday broadcast injecting energy into the seats and that surge spilling over to the players on the court, the Bears found themselves in a tough spot from the four-minute mark of the first half to the end of the game. Leading 29-26 one minute, Baylor found itself trailing by double digits the next. Baylor coach Scott Drew said the crowd had a lot to do with that.

“Because of the noise, we had trouble communicating what we were doing,” he said.

In racing to a 17-0 start to the season, the Bears had become known for all of the star power they put on the floor and their incredible athleticism and length. While some of that showed up Monday night, the Jayhawks had an answer — most notably junior forward Thomas Robinson, who scored eight of KU’s first 10 points and finished with 27.

“He’s an All-American,” Jones said. “He played like he’s supposed to play, and he played like an upperclassman. He’s a tough guy who delivered for his team.”

Senior point guard Tyshawn Taylor backed Robinson’s big night with one of his own, and, for the second straight game, appeared to be the difference.

According to Drew, Taylor’s best traits rubbed off on the entire Kansas team during Monday’s drubbing.

“Early on, they were good,” Drew said of the Jayhawks. “But now they are even better, and I think the nation saw how tough they are.”

Asked what he hoped his team learned from its first loss of the season, Drew pointed to the lessons it learned having a positive impact on the conference race.

The Bears and Jayhawks will play Round 2 of the series on Feb. 8 in Waco, Texas.

“The great thing is, you play everyone twice,” he said. “So you have a chance to play better the next time.”

Listen up, all you top flight recruits who are still deciding where to play. Just read the above.

There isn't a fanbase that matches the one in Allen Fieldhouse. The home court advantage at KU generates more energy and will to win in its players than anywhere else. It's a proven fact. Hands down. Just look at the won/lose record in AFH, both recent and long term.

Why visit AFH as an opponent, when you can make it your home court? Come feel the love and become part of the KU legacy.

Not to mention, the best coach in America. Coach Cal promises the NBA. Coach Self will make you the best player you can be.

Also not to mention the best big man coach in America. We bring in talented big men, but typically guys not ranked in the top 20 or 25 overall players in America. Yet Manning and Self continue to develop lottery picks out of those guys. It just amazes me that Baylor keeps getting the kind of big men they keep getting, and we keep losing out on guys like that. Can you imaging the monster Bill Self and Danny Manning could have turned Perry Jones into if they had him a couple of years?

"Can you imaging the monster Bill Self and Danny Manning could have turned Perry Jones into if they had him a couple of years?"

Not to mention what Hudy would do with him...

As the Intro says there is no better place to play!

You makin' me laugh!

I'm surprised that the noise bothered Baylor that much.

Most of them look like they're 40 years old. I can't believe they can hear that well.

Its not just the noise its the LOVE that the fans are expressing that makes it so hard for the other teams to compete in the PHOG.

Just 114?? At the K St game on Jan 4 it was 117. My ears are still ringing. And they felt like ringing last night even though we were with our Omaha group watching ESPN. But we were loud. RCJHGKU!!

We've got a one-upper!

However, you could easily spot the ones who were at the game the previous night.....they were the ones with a very hoarse voice!! I'll bet the OU game in the 84-85 season (Danny's freshman year) was probably the loudest game I've been in....would definitely rank in the top-10 loudest!

Someone should post their top ten loudest games. I think KU/OSU in March, 1995 with the Big 8 title on the line was the loudest I've been in...Big Country vs. Ostertag.

No meter back in 1990 either when we hammered Rick Pitino and UK 150 - 95. Plus some legend and lore about Roy trying to call a timeout for Rick, who was so very happy to be in the phog that day. Awesome. T Brown hit everything from downtown. Never saw or heard anything like it again. So loud ... I believe structural repairs ensued ...

The fans did Baylor a favor. The less they can hear Drew, the better their chances of winning... and we still won.

Holly Rowe said the noise level was between a jackhammer and a jet airplane last night.

Personally, it would have been much more pleasing if Erin Andrews or Jenn Brown were delivering that info.

Don't forget the return trip to Waco, Febr. 8. We will see how good KU really is.

I will not be able to see that return game, unfortunately. I will have to DVR it or watch the highlights after getting back from the All American Rejects concerts. Hey, what can I say---"It's my Dirty Little Secret!"

Speaking of raucous, does KU put that pregame video up anywhere? Gives me goosebumps every time, would love to be able to watch it and see when they change it.

Your wish is my command ..

Thumbs way up. Thanks.

Here's another link of a slightly older video. There's a few things I like in this one - the McMorris dunk, a shot of Aaron Miles (one of my all-time favorite Jayhawks), a Julian Wright 360 dunk, and you get a unique shot of the pass from Collins to Chalmers on the Mario's Miracle shot. Either way can't go wrong. Both this and the link provided by HEM are about the best quality I've seen.

Most people on here know that it's former coach Larry Brown but some may think it's just an announcer voice over. Maybe they could get LB to submit to a 2 second video shoot of him saying "there's no better" then cut to the video.

Thanks for sharing, HEM. Supersplendiferous!

It was phoggin loud there last night!! :-)

It was right up there with the Big Monday game vs Mizzou (when Quin was coach) and KU handed out thunder sticks before the game. My ears were ringing for days.

Scott Drew does less with more than anyone else in the country except Rick Barnes. If we can at least split with MO too, both those teams will find a way to lose to others. MO already has. Let's root for Baylor to be upset at home by someone you might never expect. It is going to happen! I'm also hoping for at least one win at Baylor or at Missouri. Two wins would be awesome! Let's keep rolling.

martyks, i've been saying those EXACT words about those 2 coaches for years. i only used to say it about barnes, then drew came along.

with the talent he has year in and year out, i would normally say "it's only a matter of time" until he wins an NC. after watching him last night, i don't really think it is. watching him makes me wonder how he gets that kind of talent to go there. it makes me wonder why those kids are soooo drawn to waco, to the university, to that coach. are these kids lazy talent that is just biding their time? what is drew "selling" these guys? is it tradition? i just don't get it.

the league is still up in the air as far as i'm concerned. if the KUBB TEAM plays as a team like they have the last 2 or 3 games i'd say it has a better chance of winning it than i would've thought about 10-15 days ago.

Did anyone else notice how short that post-game handshake was between Coach Self & Drew?? It was more like a blow-by. There's really no love between the two whatsoever. I'd like to know what's behind the surface - it can't just be the disrespect shown last year during pre-game.

It was also interesting seeing the "interviews" for each when they were asked to talk about the star players on the opposing team. HCBS was totally comfortable talking on Perry & positively gushed about him. When Drew talked about Robinson, it looked like he didn't want to be there & felt really uncomfortable talking about a Jayhawk. He wouldn't make a very good diplomat.

Just heresay, but I've read where many of the Big 12 coaches don't like Scott Drew, but no reason is ever given. Drew has done a heckuva job though...remember when Baylor was scandal ridden and could only schedule conference games?

Just got tickets to the Feb. 11th game up in the Fieldhouse and am super stoked!! Only my second time watching a game and first in 16 years!!

We are going up early and staying the night which means I need some tips guys! How early can I get in before the game starts? Which restaurants should we try? Which bar should we go to after the win? When and where is the best opportunity for me to try to get pics/autographs from the team?

I'm a Wichita native and only been to Lawrence once when I was a kid. Any inside info would be appreciated! Thanks guys.