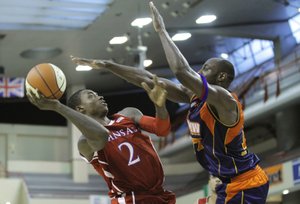 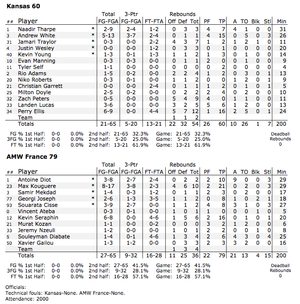 The Washington Wizards forward — and 17th pick in the 2010 NBA Draft — dominated during a crucial stretch, helping to lift Team France to a 79-60 blowout victory over KU at Stade Pierre de Coubertine.

KU trailed just 51-50 with a minute to go in the third quarter before Seraphin took over.

The 6-foot-9, 275-pound forward scored seven points during a 19-2 run over the next five minutes that turned a close game into a rout.

Seraphin, who didn’t play in the two teams’ game Saturday, finished with 16 points on 6-for-8 shooting.

“I was just chilling at my house, and my friend told me there they’ve got a game against Kansas,” said Seraphin, who averaged six points and three rebounds for France’s national team in the Olympics earlier this month. “I said, ‘OK, let’s go. Let’s play.’”

Self went without seniors Elijah Johnson, Jeff Withey and Travis Releford, saying he wanted to get his young guys more experience. Another potential starter, Ben McLemore, also didn’t play because of a nagging groin injury.

Though that left the Jayhawks with just one scholarship upperclassman — senior Kevin Young — they still managed to take a 34-31 lead into halftime.

It didn’t keep the Jayhawks in it the whole game, though, as Seraphin’s inside presence contributed to the French making all seven of their two-point attempts in the fourth quarter.

The Jayhawks ended up with 26 giveaways.

“Offensively, we’re not very good. And we turn that sucker over at an alarming rate right now,” Self said. “Our newcomers are unbelievably poor at taking care of the basketball.”

The loss was the Jayhawks’ second straight defeat after not losing an exhibition game since 1995.

“Our veterans need to really step up, because there’s no reason why we should have lost back-to-back games,” Self said. “Tonight’s a little bit expected, based on the personnel, but last night was inexcusable.”

Still, Self believed the freshman forward had the potential to play better.

Andrew White added 15 points on 5-for-13 shooting from the floor and 3-for-7 shooting for three.

The Jayhawks ended their European exhibition tour with a 2-2 record.

“I think, if anything, it tells us how hard we need to work, because we’re not very good right now,” Self said. “I’m not sure anybody’s any good in early August, but we’re certainly not.”

The team will spend one more day in Paris before returning to Kansas on Tuesday.

Coach wants to win. He can't help himself. He chooses the substitutions, the minutes, the rotation.

Can't stop wondering what it would have been like if McLemore was healthy.

Not often you see a team lose by almost 20 after out-rebounding a team by almost 20. For some strange reason, I find this stat encouraging.

To me, that stat says wasted opportunities and poor shooting.

Which three are you referring to? We have six returning players of which I feel confident of only two or three. EJ, Releford and Kevin Young

I think Bill is sending a message to the freshman loud and clear, "Welcome to the big time...you are no longer the best player in your conference, or your city, or your state. You are now Jayhawks and you have a heck of a lot to learn.

He may be sending a message to his seniors and letter men....you've got to lead by example.

He may be sending us fans a message as well.....patience, this season is going to be a work in progress!!

Post-Europe power rankings .. past spot in ( ) .. just my opinion. McLemore drops only by default. With White and Ellis, McLemore could make our freshmen class spectacular this season:

If McLemore isn't saddled with longlasting injury, top nine on your list look to be very promising. #s 10-14 really have something to shoot for if they manage many minutes. Wesley and Traylor probably not transfer material; but Lucas, Doyle and Adams had best give it their very best shot this season if they plan to stay.

Good analysis. Thanks. There was something about watching justin tv on the HD. I try to save the pain for the regular season. I will drive a thousand miles to watch a game on a football field, though. Can't wait to see what HCBS puts together. Don't see so many frosh playing early so he must be making some key decisions.

I don't think Coach Self as any choice but to let freshmen play early and often. Counting RS freshman, who else is there?

Item #7 on your list is an excellent point, at least for the games where the veterans were playing. I don't know that the freshman players have learned the offense yet.

I have no idea what is meant by power rankings here, but you need to pay close attention to who contributes most to the team and then revise your positioning of EJ. I really worry about his play at point guard. Hopefully, Releford will play as he did in his best games last year. In some game he forgot to contribute like I think he can. Ellis and Peters are the best additions so far. Let's hope Tharpe can go against Big 12 competition and, of course, against some of the non league teams we face. I really think point guard is the problem this year. I sure hope I am wrong.

Just a suggestion..maybe you should break it up into front court and back court, you know, apples to apples, etc. Just a thought.

Doyle only played 5 minutes in the first 3 games, that's not enough time to prove anything, he still manage to contribute, if he played 15 mins i am sure he would contribute even more. Plus they are still learning each other, that's why the passing is off.

The fact that Ellis, Peters and Tharpe all look good are the keys to me. Ball-handling and taking over for TRob were the biggest concerns in the off-season, so if those 3 guys are ready to play that's huge. We know EJ, TRel, W and KYo will bring it, hopefully BMac recovers nicely and plays huge too. That's a heck of a rotation right there. It's exciting for people to think so highly of White (HEM putting him at #4 for instance). Sure I liked the look of his shooting stroke from HS highlights, but not having seen any footage from the Europe trip I'll hold back before upping my expectations for him, which is to be an occasional shooter to put on the floor this season. Just looking at the box score here I have to like Traylor grabbing 7brds in 11mins. I feel pretty confident Self will put him in from time to time when guys aren't getting after the boards as an example. Not bad numbers from Lucas really either. I think Adams/Doyle will have a chance to get minutes later in the season if they can improve. I saw that JacquesMerde is concerned about EJ's PG play, did he turn it over a lot on this trip? He looked sound with the ball when he handled it last year. I also think he knows playing well as a PG will be key to him heading to the NBA as teams would love to see a guy with his size/athleticism that knows how to control the ball and run an offense.