Strength and conditioning coach Andrea Hudy talks about the science behind building a stronger and faster athlete.

Kansas center Jeff Withey says both assistant coach Danny Manning and strength and conditioning coordinator Andrea Hudy have helped him with footwork while at KU. Withey talked to reporters on Tuesday, March 13, 2012. 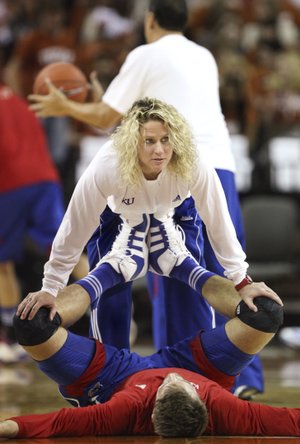 Andrea Hudy, associate director of strength and conditioning for the men's and women's basketball teams, stretches center Jeff Withey before tipoff against Texas on Saturday, Jan. 21 at the Frank Erwin Center in Austin. Hudy's responsibilities reach far beyond stretching and include tailoring workout regimens for individual players and monitoring calorie intake

New Orleans — Such silly, dangerous things can happen in the weight room, where steel clangs and challenges fly.

And then there is the facility supervised by Andrea Hudy, strength and conditioning coach for the Kansas University men’s and women’s basketball programs.

So much science goes into the planning of the workouts, the study of the progress each individual makes. Decisions are made with intellect, not emotion.

Well, most of the time anyway.

Former Kansas University reserve guard Jeremy Case, now an assistant coach at Southeastern Missouri State, is fuzzy about the details. He just remembers feeling “terrible” about what happened. Still does.

Hudy recalled more details, perhaps because pain has such a long memory.

Hudy said Case complained he couldn’t possibly do four repetitions of the weight she prescribed.

“It was a bet,” Hudy said. “I said ‘If you do that four times, I’ll do a multiple-fatigue set for 30 reps.’ He said, ‘You’re on.’ I took the bar off the rack, lowered it and I heard it (her shoulder popping.) Everybody heard it. I said, ‘I hurt my shoulder.’ He said, ‘You can’t stop now.’ I said, ‘All right, I’ll prove it to you.’ Twenty-nine reps later, I ended up in the training room.”

It’s a painful memory for more than just Hudy.

“Next day her arm’s in a sling,” Case said. “Damn, I feel so bad. Just goes to show how tough coach Hudy is. She’s no ordinary lady. Really tough lady.”

“I lost the battle, but I won the war,” Hudy said. “He didn’t think he could do four reps, and he did six.”

Getting athletes to do more than they thought their bodies were capable of giving them defines coaching. She won the war, and an even deeper respect from her pupils.

Hers is a job almost exclusively filled by men, and Case acknowledged wondering about that when he first heard a woman would be teaching him how to get stronger.

“After meeting her and talking with her, it was obvious she knew her stuff so well you couldn’t possibly have anything but respect for her,” Case said.

What also made Hudy the right fit is that seeing an athlete in every direction she looks is nothing new. The youngest of five children from Huntingdon, Pa., both her parents and her four siblings were all college athletes. Football players, swimmers, divers, gymnasts, volleyball players.

“I was always trying to catch my older brothers and sisters,” said Hudy, a scholarship volleyball player at Maryland. “They were always training for something, and that’s what I grew up with, always seeing people train. And everybody in my family were teachers of some sort. Education, coaching, teaching, that’s what we grew up with around the dinner table, so it was always a part of everything I’ve done.”

This Kansas team has developed as its signature falling behind and slowly eroding the deficit, playing its best at the end of games. It’s not supposed to work that way for teams with such little depth. They’re supposed to fade at the end, so consumed by fatigue they can’t finish games. Thanks in part to the work done in Hudy’s weight room, Kansas has the stamina to finish games with energy. Give her some credit for helping this team stay injury-free as well.

If Kansas defeats favored Kentucky tonight in the Superdome to win the NCAA Tournament for the fourth time (1952, 1988, 2008), the players who made it happen will thank her by name with the cameras rolling. They make a point of it.

Hudy, who customizes the workouts she prescribes based on each individual body, discussed her approach with various challenges working with this year’s players, starting with the biggest challenge, 7-foot, 225-pound junior center Jeff Withey.

Hudy eats meals with Withey, just as she did with former KU guard Sherron Collins. For Collins, less was more. For Withey, more is more.

“For Jeff right now, when you break it down, it’s calories in, calories out,” Hudy said. “That’s what we look at. ... As you get older in your career, it matters what you eat, and I’m not taking anything from nutrition now, but he needs to get as many calories as he can. As you get older, it becomes more of an issue.”

I don’t think there’s an issue for Jeff right now.

Withey has a green light to cram as many potato chips and sweets as he can stomach. The problem: He can’t stomach much.

“I don’t like junk food, really, because I feel bad after I eat it,” Withey said. “My body doesn’t agree with it. Any calories help. I’m just trying to put anything down. I’m just constantly trying to eat.”

Conner Teahan arrived at Kansas as a walk-on and ranks sixth in minutes played.

At the other end of the speed and strength spectrum, senior guard Tyshawn Taylor and junior power forward Thomas Robinson arrived as elite athletes.

“They’re two different athletes, but their power outlet is pretty close,” Hudy said of the team’s two leading scorers. “Tyshawn is more of a tendon-producing guy. The faster he goes, the better he is. Thomas might be more of a muscle-strength guy, where the slower it is, the more power he can develop because he’s really good at strength. Tyshawn might not be great at strength, but he’s reactive, tendon reactive. So you’ve got two different types of power output.”

Changes to Robinson’s body have been subtle compared with those made to the bodies of former Jayhawks Marcus and Markieff Morris.

“I think the twins had a huge change in terms of what we did there,” Hudy said. “When they got here, they couldn’t even touch the rim. It was a joke. They had talent, and they’re really smart, in-tune people, but they never trained until they got here.”

Robinson has improved more than just his basketball skills.

“Thomas came in, and he looked like that, now that he’s put on 20 pounds, he looks better, but that was mom and dad,” Hudy said. “He’s moving faster, so he’s a better athlete. We’re moving a larger mass faster.”

The well-toned mass moved so fast it carried Kansas all the way to the national-title game. Not bad for a team that had just one player, Taylor, who scored in last season’s Elite Eight loss to Virginia Commonwealth.

Also, the article says she "worked with" eight national champions at UConn and one here already. Do the trainers not get rings? If not, someone needs to correct that injustice.

Bingo! We really, really must keep this lady on our staff, whatever the cost in terms of dollars or praise and notoriety by the Kansas athletic dept. No secret, our current squad developed the strength and endurance to complete late in 40 minute contests. If Releford had not fouled out of the national final in New Orleans, and if that game had lasted another 4 minutes, the Jayhawks might well have walked off with another title. Calipari's wonderkind seemed on the brink of running out of gas prior to their last surge to protect a descending lead. Andrea Hudy deserves a bundle of credit for avoidance of major injury to our top 8 contributors to this Final Four season. She helped enable Tyshawn and Travis to miss hardly a beat, considering the injuries which both of them did sustain. It is a pleasure to read the praise which Jeremy, Marcus, Jeff and recruit Tony Parker direct her way. Andrea Hudy is a rare gem who sparkles brilliantly in the framework of winning Kansas basketball.

I recently read (can't remember if it was here or another site) a story where a recruit mentioned Coach Hudy by name as a reason he was considering KU. Don't know that I've ever seen a strenght and conditioning coach mentioned by a recruit in that way.

Also, “She transformed me from a slow white guy to a not-as-slow white guy,” Teahan joked, is a very funny quote and probably really true.

It was Tony Parker, and it was an ESPN article

that's right. thanks for the reminder.

No chance we would be where we are today without Hudy - she is amazing!

Good article. I sure hope they take really good care of Hudy.

However, although Robinson is an important cog and we wouldn't be here without him, there are several other members of the team we can say the same about. It took the whole team, not just one player, to get here.

It makes me nervous to read nice articles about her. A few nice ones about Manning and he's gone!

Andrea Hudy should be a lifetime member on the Kansas coaching staff.