Former Kansas University basketball guard Mario Chalmers already is a hero in Lawrence. He made that miracle three-point shot that led to KU’s 2008 national title.

But he’s also a hero off the court. 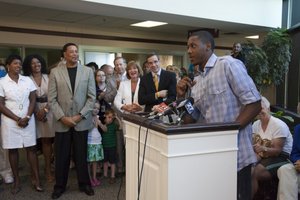 On Friday, Chalmers, who now plays for the Miami Heat, celebrated the grand opening of the shop along with about 200 people from the community, including cancer survivors.

Nine years ago when she was diagnosed with breast cancer, she had to go out of town for those services.

“They are so important because they make you feel more normal,” she said.

Chalmers attended the event along with his parents, Ronnie and Almarie Chalmers, and older sister Romeka.

“Just to see the project is amazing,” Chalmers said. “It’s to help people with cancer in their everyday life — just to help them survive.”

He wanted to help cancer patients because a longtime childhood friend, Paul Peterson, lost his mother, Pauline, to the disease. Chalmers said she was like a second mother to him.

“I just want to do anything I can,” he said.

Mike Dann, of Baldwin City, said his wife, Terri, battled breast cancer eight years ago. She went to Kansas City for wigs and other much-needed, feel-good services. He said having Mario’s Closet right down the hallway from the oncology center is going to be much easier for patients.

“It’s a real battle between you and the cancer, and somebody’s going to win and the history shows that those who have a positive attitude and can feel good about things have a much better chance of beating the cancer,” he said.

Not only is his wife a survivor, but he’s a Hodgkin’s lymphoma survivor, and both received treatment at LMH.

“We have the best cancer care in the region right here in Lawrence,” he said.

Dr. Sherri Soule, a hematologist and oncologist, said, “It means so much to us that he chose this community, and, obviously, he’s a big hero here.”

She said the shop will enable low-income patients to get those much-needed services. She recently had a patient whose hair was falling out and needed to get her head shaved, but the patient didn’t have enough money to go to a stylist.

“You would be surprised at how many people don’t have those resources,” she said. “Now there is a place to go.”

Mario is the hero again. This is really doing something with your life. That looks like a proud dad in the picture, too.

Class, pure class. All of Jayhawks nation should be so proud of Mario.