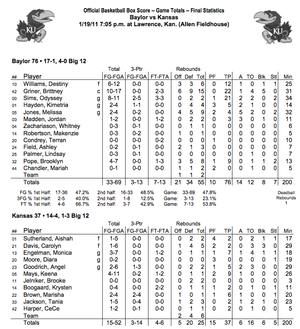 Knocking off No. 1 Baylor — even without Brittney Griner — would have been a tough order for the Kansas University women’s basketball team.

Factor in Griner, the Bears’ 6-foot-8, sophomore phenom, and the Jayhawks had little chance at all on Wednesday night, when they were flattened, 76-37, by the top-ranked Bears at Allen Fieldhouse.

“I don’t think they came in here and left any doubt that they’re the best team in America right now,” coach Bonnie Henrickson said. “We didn’t fight them much on that, unfortunately.”

Featuring an array of low post moves, Griner scored at will in the paint and was an even bigger force on defense.

In 31 minutes, Griner racked up 22 points and 15 rebounds, blocked five shots and used her 88-inch wingspan to alter countless others.

As if Griner and her disruptive length weren’t enough to deal with, the Jayhawks faced a size disadvantage at every other position as well, making for a rough night at both ends of the floor.

Going up against the Big 12’s stingiest defensive unit, the Jayhawks found little rhythm on offense.

“I thought we looked dazed,” Henrickson said. “I was shocked that we didn’t have more fire and more toughness. I was shocked.”

The Jayhawks trailed 40-14 at the half after shooting shoot only 20.8 percent and getting outrebounded, 30-10.

For the game, KU was outrebounded, 55-25, and relented 21 offensive rebounds to Baylor, six courtesy of Griner.

With Griner anchored in the paint, Davis — KU’s leading scorer and the Big 12 leader in field-goal percentage — was never a factor and finished with only two points.

“There’s a lot of post players that average 21 points a night,” Henrickson said. “But there isn’t a post in America that dictates that much on defense and limits what you can run and where you can go with the ball.”

In the face of the Baylor’s perimeter defense, led by the on-ball pressure of Odyessy Sims, no one for KU could muster much.

“They’re good enough to turn you over, and they can gamble in passing lanes and be overly aggressive because they’re sending you into (Griner),” Henrickson said.

And aside from worrying about defending Griner, the Jayhawks struggled to contain Baylor’s assortment of wing players, Sims in particular.

Sims, the Bears’ freshman point guard, used her combination of size and quickness to torch the Kansas backcourt for 21 points.

KU will look to end its two-game skid Sunday when it plays host to No. 14 Oklahoma at noon.

hmmm kim mulkey was an assistant before taking over a bad baylor team. she had a title in what 5 years? she made less and took over a program that had less tradition than kansas. she also made less money(a lot less) in the same time bonnie hasnt even made the ncaas.

lol im sure the "defenders" will say we beat em 2 years ago. of course no one will mention injuries baylor had suffered the week they came to lawrence that year..... so other than cu at home and maybe mu(they are better) who do we beat? am i overly optimistic saying 5 wins??????

Mulkey's a bad example for this discussion. First of all, she's been at Baylor since 2000, and she was at La Tech as an assistant coach for 15 years after playing there. She'd known nothing but success as a player and coach before she took over, and was considered one of the top 3 assistant coaches in women's basketball when she got the Baylor job.

Second, believe it or not, the talent she inherited was pretty solid. Two players from Baylor were drafted in the first round of the WNBA draft in 2001. She's had 7 players drafted, including 4 first rounders, in her time in Waco. She's also had two of the most dominant women's post players in the country in Sophia Young and Brittany Griner.

She's done an amazing job, one that should be considered on par with anything Bill Snyder did at K-State, just for comparison. If she were honest, I believe she would admit that their success has been beyond her wildest expectations for a school like BU. But I don't think that any of this makes Henrickson a bad coach, and I don't understand why she needs to be fired. Her team is 14-4, with some winnable games coming up. Baylor is the #1 team in the country, and the Big 12 is the #1 conference in the country. There are 5 teams ranked in the current top 25, including 2 of the 4 teams KU has lost to. Unfortunately, things don't get easier soon because #15 OU is coming to town. After that, there's no reason to believe that KU can't win some games against KSU, MU, CU, the rematch against NU, OSU, and UT. If they can win 6 games in conference and finish with a 20-win season, they should be in the NCAA tournament.

With your username, I would expect you to be a little more supportive.

brutal...someone tell me one good thing that has happened under Bonnie???? and don't say non-conference wins becuase that just makes conference play an even greater let down. I love KU and want success! Something just isn't right in this women's program.

are people really making excuses for someone who has done nothing but steal money from the university? also i have heard plenty of negative feedback on her camps which isnt good for the wbb or our school! i have said before lew pulled off something by landing bonnie because other schools wanted her and we landed her. basically fools gold!!!!!!

and mulkey could have reason those players made 1st round of draft by the way. maybe brenda freese is a better on to compare her too?

I would be surprised if Bonnie is the coach next season. The women's program is sooooooo bad and it's unacceptable! We're talking about ku bball which has the the best history, tradition and facilities in the country. Come on new ad, pull the trigger!

ooouuuccchhhhhhhh... oh well, KU men's will do another slap in Drew's face one more time anyway..

This will probably be the first major decision for the new athletic director. Bonnie signed a contract extension in 2009 taking her through to 2013 at $485,000 per. So a decision will probably have to made after this season whether she will be retained. If you leave her hanging without an extension, recruiting gets harder. KU has made no progress in the B12 during her tenure. She has not recruited well in-state, and her teams, while playing ok during the preseason part of the schedule, fall apart once they reach conference play. If the new AD is satisfied with mediocrity, Bonnie is his coach. If he wants to move the program forward, he will find another coach.

Don't forget the $160,000 retention bonus. I think she is a good X's & O's coach. Most are by the time they reach this level. I also think she has done a fair job of recruiting. Game management and player development are what's lacking. The bottom line is that she has had time to build a winning program and for whatever reason, she has failed. Time to move on.

pretty sure our new ad hired miserys new coach at illinois state. she took a crap program and already made strides at mu in her first season. i gave bonnie time and now its time for her to be gone!!!!!!!!!!!!!!!!!!

"Bring back the days of M. Washington."

Oh, please... bring back the thugs?

Marian had some good players, but her record wasn't that great either. She had some good kids, but some of her players stained KU's reputation.

I'd rather watch Bonnie and her teams play than any of Marian's teams. Watched some of Marian's kids give up on the court. No thanks.