Upon officially taking the floor for the first time this season, sophomore Carolyn Davis and the Kansas University women’s basketball team broke into its pregame warm-up with a casual layup drill. 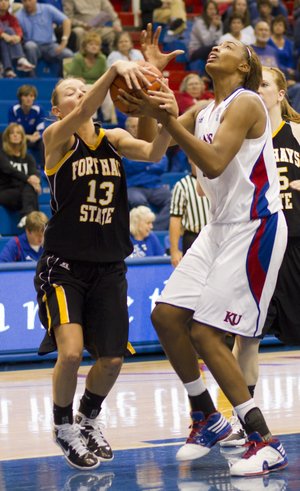 The scene was a fitting prelude, because once Sunday’s exhibition game tipped off, Davis made it look just as routine.

Davis scored 35 points in 33 minutes, nearly all coming right at the basket, allowing the Jayhawks to coast to an 83-62 victory over Fort Hays State in Allen Fieldhouse.

“What she did today is what great players do,” coach Bonnie Henrickson said. “She made it look really, really easy.”

Junior Aishah Sutherland had eight points and 11 rebounds, sophomore Monica Engelman added nine points, and senior Marisha Brown contributed 10, but it was the 6-foot-3 Davis who gave the Tigers fits.

Davis scored the Jayhawks’ first 10 points and had already notched a double-double (26 points, 11 rebounds) by the end of the first half.

Planted in the paint, Davis was the focal point of KU’s offense, getting a touch on nearly every offensive possession. Even when the passes weren’t perfect, Davis was able to snare the ball and finish smoothly.

“One thing about big kids is it seems like they can either catch the ball or they can’t,” Fort Hays State coach Tony Hobson said. “And she’s got great hands. It’s something you can’t teach. “

Sure, it’s only an exhibition game, and Davis’ gaudy statistics don’t count. And, yes, her big game came against an undersized Div. II opponent.

If Davis’ performance is any indicator of what she’s able to accomplish this season, though, the Jayhawks will take it.

“If she can do that in the Big 12, she’ll be phenomenal,” said sophomore guard Angel Goodrich, who had five points and six assists.

It only will get harder for Davis from here.

But for now, Davis will do what she does best — score at will — gaining confidence along the way.

“It really helps because I know I can finish around the rim,” Davis said. “Even when I play against bigger people, I just have to look more to the rim and not worry about who’s defending me.”

“This is a good stepping stone,” she added.

• Every Jayhawk except senior center Krysten Boogaard played. Henrickson said after the game that Boogaard has been dealing with some tendonitis and is being limited on a precautionary basis.

“We need her more in two or three weeks than we need her right now,” Henrickson said.

• Freshman Brooke Jelniker started at guard and played 13 minutes with one rebound and one assist.

• Jayhawk fans got a scare early on in the first half when Goodrich went down on the floor on the baseline. She grimaced, grabbing her left elbow — which she described as having been “tweaked” during a tangle-up.

Goodrich also left late in the fourth due to soreness associated with the still-healing scar tissue in her surgically repaired right knee, but said after the game that she was fine.

What's up with these horrendous uniforms? Names on the bottom looks pretty bad.

I agree. I sure hope the men's uniforms aren't like this. I remember readign an article about the new uniforms a few weeks back and don't recall the names being at the bottom. It looks very bad. I think it is due to the jersey itself being thinner around the shoulders. The guys jerseys won't be like that so they should be fine. But the jayhawk on the top reminds me too much of our football jerseys and no one wants that.

Carolyn was terrific. I thought Aishah looked great also. My heart was in my throat when Angel went down, but sounds like things are fine. We could use a few more people in the stands. It's great fun....see you Sunday.

I made a comment while at the game that I thought that the new uniforms looked great! Love the Jayhawk between the shoulder blades. The piping on the shorts and the jersey also look sharp.

The difference in the overall team athleticism in just the last 2 years is amazing. The kids are obviously going to go through a learning curve but the future looks very bright!

Uh, scuse me. I'm more concerned with her wearing MU colors. Those clothes should be burned, along with all other women's basketball coach's clothes. Where is this Women's College Basketball Coach store? I've never seen it, yet it obviously exists. And where is the WCBC salon?

Yeah, really. Too bad the first two posters don't have any Halloween spirit. Plenty of fans were dressed in costumes at the game, there was a costume parade at halftime, and even the Allen Fieldhouse big screen had a candy and jack-o-lantern motif. I'm glad that Bonnie was in a festive spirit!

Plus, neither Mizzou nor Fort Hays State have "pumpkin orange" as one of their school colors. Get your glasses adjusted guys!

Looking forward to a great year from the women. Stay healthy Angel.

Coach'em up Bonnie. You're hanging by a thread.