Dr. Ken Wertzberger, a Lawrence orthopedic surgeon, recalls working with Kansas University student athletes for 27 years during a 2010 interview. He was honored last year with the bronze Jayhawk statue by the KU Athletics Department. Recently, he decided to leave OrthoKansas after 32 years and start his own practice in Lawrence.

A former KU sports doctor received recognition for his continued commitment to the university. Ken Wertzberger worked on the hill for 27 years.

Ken Wertzberger describes his ties with Kansas University athletics as a special privilege.

He grew up a couple of blocks from KU’s campus and fondly remembers accompanying his father to watch “Wilt the Stilt” Chamberlain in Allen Fieldhouse.

In grade school, he was a member of the KU Football Fan club. He and other students would sit in the bowl of the football stadium. They had badges with their names on them and they got to watch a season of football games for $5.

“I remember going to all of those games, and since my brother (John) played, sometimes I would go down to the locker room and get a signature or something,” he said.

He followed in his brother’s footsteps and played on the 1968 team that went to the Orange Bowl.

Wertzberger graduated from KU’s School of Medicine in 1973, and six years later, the orthopedic surgeon returned to Lawrence to practice with his brother. He also returned to his alma mater.

He spent countless hours watching over the athletes. He worked to help prevent injuries and help those who were injured heal. He was on call 24/7, and often traveled with the football and basketball teams by bus and plane. He operated on at least 400 athletes before retiring in 2006. 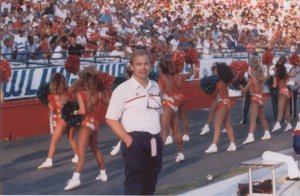 Dr. Ken Wertzberger, a Lawrence orthopedic surgeon, served Kansas University athletics from 1979 to 2006. He was honored for his service on Feb. 22, 2010, with a bronze Jayhawk statue.

For his work, the KU Athletics Department honored 62-year-old Wertzberger with a large bronze Jayhawk statue during a home basketball game on Feb. 22.

“It was an appreciation for all he has done for student-athletes at KU over many years,” said Jim Marchiony, associate athletic director. “It was honor that was well-deserved.”

When Wertzberger began volunteering at KU in 1979, his brother and two radiologists helped, too. One year later, they left. For the next eight years, Wertzberger was the only doctor working with KU athletes.

“I wore a lot of different hats at that time,” he said. “It was crazy.”

Today, there are four Lawrence orthopedic doctors who volunteer, and Magee, a full-time general practice doctor paid by KU. There also are two huge training facilities and numerous ancillary ones.

Wertzberger worked with all of the athletes in one training area in Allen Fieldhouse. Back then, he treated pains with heat pads and buckets of ice. Today, there are swimming pools and whirlpools.

He said sports medicine has drastically changed since 1979.

Magnetic resonance imaging, or MRI, he said, changed everything, he said. It became much quicker and easier to diagnose an injury.

Wertzberger said athletes undergo more testing than they did then; for example, doctors check for heart problems and sickle-cell anemia.

Surgeries have evolved, too. Back then, the only joint being arthroscoped — a minimally invasive surgical procedure — was the knee.

Wertzberger won’t forget when Marshall went down with an ACL injury — a torn ligament in the right knee — during the NCAA semifinal game in April 1986, when KU was playing Duke in Dallas. It was one of the few times that Wertzberger went on the court during a game.

“At that time, there were only two or three players that had come back from this injury, so it was a really big deal,” Wertzberger said. “It’s not a big deal now. But then, it was a huge deal.”

Wertzberger operated on the knee, and then they were unsure how long to keep Marshall from playing.

“Nobody was doing that. We were kind of flying by the seat of our pants,” he said.

Marshall ended up starting along with Danny Manning during the 1987-88 season, but injured the other knee in December during a game against St. John’s University in Madison Square Garden, and was out for the rest of the season.

“He was kind of the mascot at that time,” Wertzberger said. “The team went on to win the championship a few months later.”

Wertzberger said being in the locker room wasn’t always fun. After a loss, it could be downright unpleasant.

But, that certainly wasn’t the case on April 4, 1988, when KU beat the University of Oklahoma in Kansas City, Mo., to win the national title.

“It was crazy. No champagne, but it was crazy. Everybody was going nuts,” he said. “It was great fun.”

Wertzberger received a championship ring for being part of the team.

After the game, he drove home from Kansas City. The phone was ringing when he stepped inside his house about midnight. It was someone from Lawrence Memorial Hospital’s emergency room, who said they needed him to work.

“I was there the entire night because of all the craziness. There were so many injuries that it was like a battlefied,” he said. “People were just absolutely out of their minds.”

During his time at KU, Wertzberger worked with many coaches including Don Fambrough, Larry Brown, Roy Williams and Bill Self.

“I still see Don Fambrough who nowadays never lets the facts get in the way of a good story,” he said.

“Larry Brown never wanted a medical explanation, just ‘Can he play or not?’ ... There were lots of opportunities to butt heads with the coaches. I think sometimes the doctor was seen as an impediment to having the best team on the field.”

When it came to deciding whether an athlete played, Wertzberger said it was a decision among the player, trainer and doctor. If the player was seriously injured, it was the doctor’s decision.

The athletes benefited because Wertzberger had been in their shoes. While playing KU football, he suffered a broken hand and two knee injuries. He played with the broken hand.

“There are lots of dings and pains that they endure, but they aren’t bad enough to keep them out of the game. That goes on all of the time,” he said.

“Fortunately, we didn’t have any injuries that were life-threatening or that paralyzed anybody. Those are the things that you really worry about.”

Wertzberger said his fondest memory isn’t the championship, but of the players’ recoveries.

“My best memories are those people who I got to work on, that got better, and went back to play and were OK. I have a lot of those memories and that’s the fondest thing that I think of,” he said.

While Wertzberger operated on a lot of KU athletes, he couldn’t speak about most of them because of federal privacy regulations. However, he recalled a few, including Mark Randall’s unbelievable recovery.

Randall had developed Compartment syndrome — the compression of nerves and blood vessels — in his lower leg. Wertzberger said it is a semi-serious problem. He performed surgery on a Tuesday night.

On Friday, he received a call from Randall’s trainer: “Randall’s doing great and he wants to play.” Wertzberger said he couldn’t believe it. He went to check on Randall and he seemed to be doing well, but they decided to wait and see how Randall was feeling the next day.

“He felt good and wanted to play, so we let him. He scored 30 points,” Wertzberger said with a chuckle. “I was feeling pretty special.”

That was until his daughter overheard a fan after the game.

“Hey dad,” he recalled her saying. “That guy just called you stupid. He said anybody that would let Mark Randall play after that surgery on Tuesday is stupid.”

“So even though he scored 30 points, everybody has their perspective,” Wertzberger said.

After leading the Jayhawks to the 1991 championship game, Randall went on to play four seasons in the NBA.

In 1995, Wertzberger operated on Scot Pollard’s shoulder, and Pollard went on to play 11 years in the NBA.

Pollard said he could have gotten a second opinion and/or had someone else operate, but he didn’t, and he has no regrets.

“Whenever we see each other, he goes, ‘How’s that shoulder holding up?’ And I say, ‘Apparently it’s fine because it hasn’t hurt me since,’” Pollard said. “I haven’t had a re-injury. He did a good job.”

Pollard said he was sitting a few rows behind Wertzberger at the game when his former doctor was honored.

Wertzberger, who still practices at OrthoKansas, said he was nervous when accepting the honor. He joked about how he thought he would get some “Jayhawk trinket.”

When he saw the large, custom-made bronze statue, he was surprised. The only other person who has one is KU athletic director Lew Perkins.

“It is really special,” he said with a grin. “That was quite a treat.”

Great story. Thanks for all you've done for the KU program Dr. Wertzberger.

When I lived in Lawrence, you heard all kinds of stories about Werzberger, mostly good ones. One rumor---he was "knive-happy." Everyone has their critics, though.

"Larry Brown never wanted a medical explanation, just 'Can he play or not?'

Kind of what happened to Mike Leach at Texas Tech---butting heads with the medical staff, huh?

Dr. Wertzberger operated on my knee when I was a Senior in High School....1987. He did a great job. I've had to have knee surgery since then, and it's amazing how easy some arthroscopies are now; in 1987 I had some cartilage removed and a lateral release, and was on crutches for 3 months. Last time I had cartilage removed, I walked out of the hospital, albeit slowly.

I believe the rumors were about John being knive happy, not Ken, but I could be wrong.

In 2006 I destroyed my knee: torn MCL, torn ACL, torn medial and lateral meniscii. Dr. Wertzberger did a great job w/ the surgery. Glad to read he's been recognized for his work. Congrats!

That's a remarkable time frame to be the orthopedist for a big name school such as KU. Great Job!

Wow! What a great story! This is the type of stuff I just love to read about. We KU alum and fans are a special breed.

There are very few Surgeons as committed to their patients and the quality of their life as Dr. Ken.

What I know about Dr. Ken is that he is his own man who stands on his own principles, and his professional standards and integrity are without a doubt amongst the finest.

Dr. Ken is a leader in his ethical positions and leadership in the field of Sports Medicine.

There are no circumstances on this Earth that could cause Dr.Ken to compromise his Medical and Ethical Standards to himself or more importantly, his patients, and he stands virtually alone at the top of the hill when it comes to only doing for his patients what is medically necessary and conservative in terms of treatment.

Others who babble and gossip have absolutely no idea of what they speak of.

Congratulations Dr. Ken for your many years of undying and faithful service to Lawrence Kansas as a Father, Athlete and Physician.

Dr. Ken: Congrations on your honor. I knew your brother ,John, a great Dr. ,also . I had some very funny and exciting incidents with him. Everybody in Lawrence knew and respected your family and your allegiances to KU. I was sadden to hear of your brothers passing away a few years back. Again thank you for your service to KU,