Scoreboard boosters: Will defenses ever catch up to high-octane offenses in Big 12? 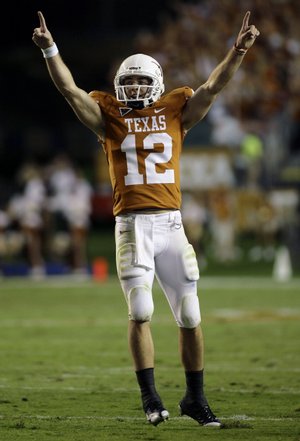 Texas' Colt McCoy (pictured), Oklahoma's Sam Bradford and Missouri's Chase Daniel are part of the new wave of Big 12 quarterbacks who have taken the conference's offenses to a new level. Coaches said the days of lockdown defenses in the conference could be gone for good.

This might put the Big 12's juggernaut offenses in better perspective. Here's what teams in the conference are averaging per game:

Will defenses ever catch up to these potent offenses? Here's how many points Big 12 teams are giving up per game:

Boulder, Colo. — Lamenting the demise of defense in college football? Get used to it.

Some coaches in the high-octane Big 12, with its ridiculously rich crop of great young quarterbacks and four of the top eight teams in the country, say there's been a fundamental shift in the game and the pendulum might never swing back.

Five-hundred-yard games are becoming the norm.

"It's out of control. We're having to change the way we look at defensive stats just because everybody is scoring so many points," Texas coach Mack Brown said. "I remember the day when we would try to keep from scoring 60 points because we felt like that was really bad. And now you're seeing 70s.

"So, I don't know where it's going to stop, but people are just running up and down the field and scoring a lot of points. And it's fun for the fans, but those defensive coordinators are pulling their hair out."

The transformation isn't just taking place on college campuses. It's also seen on the recruiting trail across the country.

"I think it goes back to high school," Texas A&M coach Mike Sherman said. "They used to take all the best players, particularly here in Texas, they took all the top players and always put them on defense. And now, because of the emergence of the 7-on-7 that goes on all summer long - it's like the AAU basketball - they just keep playing and playing and playing. And these kids, they enjoy playing offense and scoring points as opposed to keeping people from scoring points.

"So, I think it's as much a personnel issue as it is a schematic issue," Sherman said. "People want to see points being scored and these high schools and colleges are just racking up points."

There are still some stingy defenses in the SEC, but, considering all the variations of the no-huddle, spread offenses, are dominant defenses going out of fashion?

"I don't know, I think time's going to tell," Missouri coach Gary Pinkel said. "I mean, so many people are running no-huddle. When we started running it four years ago, I don't think there were five or 10 BCS teams in the nation running it. Now, everybody's running it.

Baylor coach Art Briles compared today's effectiveness of the spread styles to those of the veer offenses in the 1970s and '80s.

"I think there's a lot of similarities in what's going on, it's just become a more fast-paced game, and a lot of it's due to the (clock) rule restraints that we're under now," Briles said.

In the Big 12 and elsewhere, defenses just don't rule the day anymore.

But this isn't Arena League Football just yet.

"I think at times even this year you'll see defenses that have their good days ... or periods of games that change games," Oklahoma coach Bob Stoops said. "I don't think anybody ever has a stronghold for good on anything. Defenses will continue to match up and be able to handle it.

"But I don't see quarterbacks going away, either," Stoops quickly added. "I'm sure everybody has young quarterbacks coming up that are also skilled and good players. So, defenses will have to rise to the occasion, because I don't think it will go away."

Two of the best offenses - No. 7 Oklahoma State and No. 1 Texas - will be on display Saturday in Austin in a showdown of 7-0 teams.

"And as long as the quarterbacks continue to throw the ball like they're throwing it, it's going to be hard for defenses to catch up," Brown said.