LINCOLN, NEB. — The final margin might have looked a little better, but the frustration certainly could not have felt much better.

In fact, Nebraska coach Barry Collier and the Cornhuskers said the only difference between Wednesday's 69-48 loss to Kansas at the Bob Devaney Center and the Jayhawks' 96-54 blowout victory at Allen Fieldhouse 21â2 weeks ago other than the state was the score.

"Our intent and our effort was good in spurts," said Collier, whose squad fell to 15-7 overall and 5-4 in the Big 12 Conference after the 21-point setback.

"I think our guys were trying. They knew this was going to be a hard-fought game. We would draw near and then make some errors."

Or Kansas would hit clutch shots.

Just about every time Nebraska would labor in the lane for a putback or knock down a tough two-pointer that seemed like the spark to ignite a Cornhusker comeback in front of a season-high crowd of 13,055 in the second half, there was KU's Mario Chalmers knocking down another three-pointer. 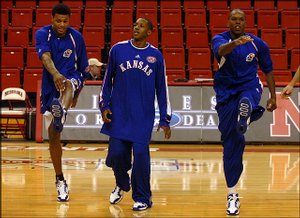 "It seemed like Chalmers had an answer to every shot we made," said NU center Aleks Maric, who led the Cornhuskers with 16 points and 11 rebounds. "Every time we would make a run, they came and shot back."

And when Maric, who had his third straight double-double, fouled out with 4:39 left, the Cornhuskers collapsed.

Kansas closed the game with a 15-3 run as Nebraska failed to score for over six minutes after closing to 54-45 with eight minutes to play.

"They are a pretty athletic team with a good defense," said NU senior Jason Dourisseau, who added 14 points. "(KU coach Bill) Self had his team ready, and I have to give credit to them for good defense. We ran our offense really well, we just didn't hit shots."

No one suffered more from that ailment than leading scorer Wes Wilkinson, who hit just one of 11 field goals and made only one of six three-pointers.

"I'm pretty disappointed because I thought I let my team down," said Wilkinson, who had several shots spin around the rim before rolling out. "I can't even complain about the looks I got because they were good and I just couldn't knock it down."

Collier, who himself displayed quite a bit of emotion when he angrily stripped off his coat and argued with officials on more than one occasion, said he thought the Huskers were too set on seeking revenge from KU's big victory a couple of weeks back.

"I thought we were pretty hyped up, and our effort might have been too enthusiastic," said Collier, of his team struggling to an 8-2 start which featured NU missing a point-blank lay-up on its first possession. "I tried to settle them down in the first timeout."

Asked if Kansas' talent presented an unfavorable match-up for this year's Cornhuskers, Maric said he wouldn't mind another opportunity to face the Jayhawks.