All five KU scores came via the ground 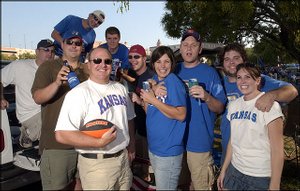 The 6-0, 205-pound junior ran through Appalachian State tacklers at one point in the second half as if they didn't exist -- sprinting 58-yards untouched down the right sideline before finally tripping himself up at the five.

One play later Cornish, who finished with 103 yards on just 10 carries, cannonballed into the end zone for his third score of the game and Kansas defeated Appalachian State 36-8 Saturday night at Memorial Stadium.

"Carrying the football is something he does very well," Mark Mangino said of Cornish after the win. "It's all the other aspects of the game that he has to stay on top of. Jon is a talented young guy. He's pretty close to becoming the complete player we need him to be."

While Cornish was probably the biggest of the unheralded stars Saturday night, there were plenty of story lines that developed.

"We gave him a segment of the offense that we will continue to build on," Mangino said of Hereford, who rushed for 42 yards on only five carries. "There are other things that he does well that we didn't display tonight. Marcus is a really good athlete, and he gave us a little spark."

Scott Webb completed KU's scoring when he added a 34-yard field goal with 9:15 left in the fourth.

Mangino admitted after the game that his team's defense is going to have to show more might in its next few contests.

"The defense played well most of the night," he said. "We need to develop the mental edge that we had on defense last year. The chemistry of the defense is not exactly where I would like it to be. I think we are better than we played tonight."

"We just don't have that mental edge that we had last year," he said. "We need to get that back.

"All the preseason talk about us being good got to our heads. We have to get back to that blue-collar mentality."

Appalachian State, which was receiving votes in Division I-AA's Top 25 poll, finally got on the board as quarterback Richie Williams found Daniel Bettis for an eight-yard score. Williams hit Bettis again on the two-point conversion attempt to cut KU's deficit to 26-8 at the start of the fourth quarter.

ASU coach Jerry Moore said his team committed too many mistakes to compete with a Division One team. Moore went on to say that while Kansas wasn't clicking on all cylinders, the Jayhawks have the potential to be a quality team by the end of the year.

"I told our team that from now on the bulk of our schedule is I-AA teams and we can't make mistakes agaisnt them," said Moore, the all-time winningest coach in the Southern Conference who has posted winning records in 15 of his 16 years at ASU.

"If Kansas makes the mistakes that we made tonight, they're just going to be an average team in the Big 12, but if they played like they did and continue to get better, they're going to have a good season."

Cornish, who coming into this season had just three career carries, found the end zone for the second time near the end of the third quarter, bounding in from a yard out to give KU a 26-0 lead.

"I think Jon's case is a testament to our system," said offensive lineman David Ochoa. "He's just been banging away, banging away. Finally he gets his chance and you can see what he can do."

In two games the New Westminster, BC native has average a whopping 10.57 yards per carry.

"He is a great back," said KU wideout Brian Murph, who also impressed with four catches for 88 yards in the first half. "Not everyone knows that, but I think they are getting a good glimpse now.

"He runs hard. I think people are scared to tackle him."

KU's opponents so far this season have not figured out a way to slow the Jayhawks' rushing attack. In two games Kansas has racked up 408 yards via the ground and seven scores.

"I like the way we ran the ball," Mangino said.

The 14-play, 80-yard scoring drive was set up by a nifty 33-yard punt return by Charles Gordon.

Mangino then tossed out his wild card when he brought in Hereford, who rushed twice for 18 yards, before Luke came back in.

Luke quickly found tight end Derek Fine for a 19-yard gain on second-and-23. Luke then met up with Marcus Henry for a three-yard gain and a critical first down. Cornish was stuffed on a run, and Mark Simmons caught a ball right on the goal-line but the officials ruled the nose of the football didn't cross the plane.

"I'm pleased overall with his performance," Mangino said of Luke. "I want to look at the tape, but unless I see something that shocks me, Luke will start the Louisiana Tech game.

The very next play Cornish cruised in behind a slew of blockers.

Luke added Kansas' first touchdown of the second half running in from a yard out with 7:49 left in the third quarter to give Kansas a 20-0 lead.

"I practiced most of the week at No. 1," Luke said. "Whether or not I start, that is up to the coaches. I really focus on the things I need to improve on."

Mangino decided to go for it with Luke on the fourth-and-one from just outside the goal-line, even though Luke had been stopped on the two previous plays.

Green put up Kansas' first points when he rumbled up the middle for a four-yard touchdown run with 32 seconds left in the first quarter.

Cornish added his own run, an untouched sprint from nine yards out with 10 minutes left in the second quarter.

ASU looked as if it might get on the scoreboard late in the half but kicker Julian Rauch missed a 36-yard field goal that bounced off the right upright.

Moments earlier it looked as if the Mountaineers might get a touchdown out of the drive as effectively as Williams was working. Williams found wide out T.J. Courman for a 44-yard pass as Courman outjumped KU corner back Charles Gordon. But Williams was hurt a few plays later when he was sandwiched by Banks Floodman and Tim Allen, and the ASU drive stalled out.

On Green's scoring drive at the end of the first, the Jayhawks went 90-yards on six plays in a little over two and a half minutes. Luke found a wide open Murph down the center of the field for a 59-yard gain on the first play of the drive. After that an ASU personal foul kept the Jayhawks drive going, and Green took care of the rest. The senior tailback rushed two times from the 11-yard line after the penalty. His second effort on his second carry was good enough for him to pass over the goal line.

KU linebacker Banks Floodman recovered a fumble in the end zone as Appalachian State threatened to score on its first possession. Rodney Allen forced the ball loose when he tackled ASU's running back Kevin Richardson.

"I was just in the right place at the right time I guess," Floodman said.

The Jayhawks might have scored on their first possession but Green dropped a pass as he was wide open in the middle of the field. Instead Kansas was forced to punt.

Kansas fans wanted a turnover on downs on a controversial call early in the game when it appeared ASU running back Kevin Richardson's knee touched the ground, Instead the Mountaineers picked up a first down when Richardson nabbed a short pass and apparently avoided KU's Aqib Talib seemingly nice open field tackle. Instead the referee ruled Richardson's knee did not touch and Richardson's second effort was good for a first down. KU called a timeout opening to utilize the newly adopted instant replay but the officials did not overrule their call.

The temperature at kickoff was 89 degrees with sunny skies and wind blowing 13 mph from the south. KU won the kickoff and decided to defer until the second half.