C.J. Henry has made big plans for Day One of the big-league baseball draft.

"I'm going to paint the house with my mom to get my mind off it," Henry said with a laugh.

The 6-foot-3, 200-pound baseball/basketball standout from Putnam City High in suburban Oklahoma City would prefer to paint the walls than nervously climb them while awaiting his fate in the 50-round draft, which will start at noon and run until 5 p.m. today, then continue again Wednesday.

"There's no guarantee I'll be taken high," said Henry, who Baseball America predicts will be selected in the first round - 17th overall - by the New York Yankees.

"I could drop to round 10 or something," added Henry, who has committed to play basketball at Kansas University if the draft doesn't pan out. "If something crazy happens like that, I'd probably definitely go to college."

Henry has heard encouraging words from scouts and his adviser. If, as expected, he's tapped in rounds 1-3, he'll be certain to land a lucrative signing bonus. 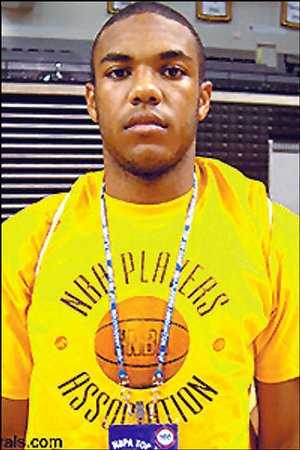 C.J. Henry, a 6-foot-3, 200-pound standout in baseball and basketball, has committed to play hoops for Kansas University, but he likely will play professional baseball instead.

"I'd love to play basketball, too, but baseball is giving me an opportunity to go pro right now, to get started on my career early," said Henry, who has worked out for 20 teams. Of that batch, the Yankees, Cincinnati Reds (12th pick), Texas Rangers (19) and Florida Marlins (22) have shown the most interest.

"If I signed for a low amount of money or little under slot money, they might let me play basketball," Henry added of front office executives of the team that selects him, "but I am thinking that will not happen."

ESPN's Peter Gammons has listed Henry as one of the top four high school outfielders available in the draft, which will not be televised.

Like those "five-tool" players, Henry can run, throw, hit for average, hit for power and field. He also can shoot the rock in basketball, something he conceivably still could do at KU.

"Coach Self knows about the draft and stuff. He called me and told me best of luck," Henry said of KU coach Bill Self. "He knows baseball is what's happening for me now. He is just being supportive."

Henry needs support. He has been growing mighty anxious the past couple of days.

"Yes, I'm excited. I can't be too worried about it because anything can happen," Henry said. "I might not go early. I will not set myself up for disappointment. I mean, teams tell you things, and I think I'll go in the first couple of rounds, but something could happen, and I could fall. Some teams pick strictly college players, others pick high school, so you never know until the draft. I think it could go either way."