Roy Williams, who violated an NCAA extra benefit rule at Kansas University by approving donor gifts to graduating basketball players and others who completed their eligibility, will wait until today to make an official statement on the matter.

Williams, the University of North Carolina's coach the past two years after working at KU 15 seasons, told the Journal-World from the recruiting trail he would study the issue Friday night.

He has, however, addressed the issue in a taped conversation with former NCAA enforcement official Rick Evrard.

That was during Evrard's two-year investigation into possible violations in KU football, women's basketball and men's basketball. Williams told Evrard he thought it was within the rules for boosters Dana Anderson, Joan Edwards and Bernie Morgan to provide departing seniors graduation gifts, which turned out to be between $50 and $400.

Because Williams was not asked often by boosters about giving gifts -- ones he insisted not be "humongous," -- the ex-KU coach said he "didn't feel like there was any groundswell of a movement," and no reason to raise a red flag.

"I didn't feel there was any campaign to try to get together and give our graduating seniors any gifts," Williams said.

Williams said of the two times he was asked by boosters if it was OK to provide graduation gifts, he first checked with unnamed KU officials.

"I know I had some conversation just to make sure it was all right," Williams said. "Again, I emphasized to the person (making gift) that I don't want this to be any humongous check for playing basketball. 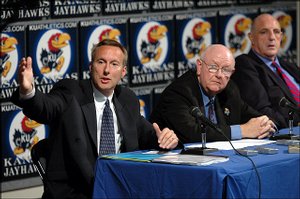 "It is a graduation gift and is something that's not advertised. It's not talked about. It's not promised (in recruiting)."

The intent behind the gifts is the reason Evrard believes the violation of extra benefit rule 16.12.2.1 will be deemed "secondary" by the NCAA -- not serious enough to warrant sanctions.

In fact, the only self-imposed sanction issued by chancellor Robert Hemenway was addressed through additional "rules education for all of the men's basketball coaches and student-athletes regarding gifts after eligibility has been exhausted."

"The NCAA defines secondary violations as isolated or inadvertent that provide nothing more than a minimal recruiting or competitive advantage. Everything else by definition is a major violation," Evrard explained.

"You might have a little bit difficult time arguing it was isolated or inadvertent because there were several student-athletes involved," he added.

Evrard's study showed 17 unnamed seniors receiving graduation gifts of money or clothing from at least one of three supporters since 1997, though Mrs. Edwards recalled providing small gifts to players since 1988.

No gifts were provided to any graduating seniors in the Bill Self era.

That's because in May of 2004, athletic director Lew Perkins learned of the gifts by accident. He was passing the basketball players' mailboxes when hoops secretary Joanie Stephens dropped some mail.

In bending to scoop the mail, Perkins noticed several letters were addressed to three KU players from supporter Edwards.

Perkins took the letters, and with the players in his office, learned they'd received cards with $50 gifts provided by Edwards.

Perkins later learned that booster Anderson also might have been providing graduation gifts. Contacted by Evrard, Anderson said he'd provided monetary gifts the past few years after learning it was OK from coach Williams.

Booster Morgan, meanwhile, told Evrard he had asked Williams approximately eight years ago if it was OK to give graduation gifts and was told by Williams to check with KU compliance. According to Evrard's report, a KU official told Morgan that after the last scholarship check had cleared and an athlete had left KU, it was OK to give a gift.

Did coach Williams do anything wrong?

"In my mind, it's simply a misinterpretation of the rules," Perkins said. "I think his response was he thought it was OK to do.

"Those things happen. I think coach Williams or any coach who has misinterpreted something, when there's no intent to violate any of the rules, he definitely feels bad about it.

"I believe it was a misinterpretation, not an attempt to gain any advantages (by Williams)."

Evrard said he recommended KU not internally punish the basketball program because of past cases he studied in which gifts were provided to athletes after graduation by coaches or donors. He said all were considered secondary violations.

"There's case precedent that clearly indicates if there's no competitive advantage or recruiting advantage a penalty doesn't really need to follow," Evrard said. "At the same time, it is important to recognize in case precedent that institutions have consistently applied a higher standard of rules education to the current administration, current coaches and current student-athletes so they are aware these things are violations and don't happen again. It's why I included to the institution the recommendation that rules education take place."

Evrard can understand how Williams would not have known that once athletes enroll, they are barred for life from receiving gifts from fans.

"When you look at the NCAA legislative services database and cases that exist there, you see consistently the coach misunderstood or didn't understand or misapplied the rule," said Evrard, now an attorney for an Overland Park law firm. "I think it is perhaps common coaches don't realize that perhaps getting a gift after eligibility is exhausted is a violation."