This season brings an end to the conference basketball rivalry between Kansas and Nebraska. They have been conference brothers for over 100 years, but rarely have they dueled for conference supremacy, Kansas claiming 53 titles to Nebraska’s 7 (none since 1950). And Kansas has dominated the overall series, 169 wins to 71 wins. But in the beginning Nebraska had the upper hand, that is until a fellow called Phog came to Lawrence. Here’s a look at some of the earliest games in the series.

The first game in the series was also the first game for either school against what is now considered a major college program. Nebraska, in its fourth season, and KU, in its second season, had played mainly against YMCA and club teams up to this time.

The 40-point defeat still stands as the worst in Jayhawk history and when the team came back home they apparently weren‘t talking. The Lawrence newspapers did not report the score, only that KU lost. The Weekly Kansan of March 10, 1900 reported “No one knows exactly what the score was at Lincoln. Even Manager Russell has forgotten, but it was big. The little northerners tossed baskets so fast that our men lost count and did not linger to find the score after the game.” The next edition of the Kansan on March 17, 1900 added “No one seems to know exactly what the score was, or how it all happened. It will probably go down into history as one of the “unexplainable mysteries.””

But the Nebraska newspapers delighted in reporting the game in detail. All 8 of KU’s points were free throws made by Lucius Vandruff. That’s right, KU did not make a single field goal. Meanwhile, Nebraska’s W. E. Anderson made 12 field goals and 10 free throws for 34 points. Only nine players in Nebraska’s history have scored more than 34 points.

The KU players were unaccustomed to the smooth floor and “their shoes were so smooth that they could not stand up.” When asked to compare Nebraska’s gymnasium with KU’s the reply was “We have none. All we have at KU is a bath and a hole in the basement of Snow Hall where we have the privilege of storing our apparatus.”

Indeed, KU’s on campus gymnasium was virtually unusable for games, having an 11-foot ceiling (raised to 14-feet in 1903) and support columns on the court. KU used an outdoor practice area to the west of Snow Hall. The burning of the skating rink on Kentucky Street (KU’s first home court) in 1899 and then the burning of the YMCA gymnasium in 1901 left Lawrence and KU without a respectable gymnasium until Robinson Gymnasium opened in 1907.

Dr. James Naismith accompanied the KU team and acted as umpire during the game. Knowing that KU was being coached by the inventor of the game, Nebraska had been practicing hard anticipating a difficult game.

This was the only time Nebraska could be enticed to come to Lawrence before Robinson Gymnasium was built. The game was played in Haskell’s gymnasium, which, although it had six posts on the court, was still better than any other facility Lawrence could offer. Many years later, Phog Allen wrote the following about Haskell’s early court, “The Indians' court was fitted with chicken wire back stops and instead of shooting for the baskets the Indians fired away from a distance at the sagging area in the wire netting. Much to the chagrin of their “white man” opponents the ball would drop dead and fall directly into the basket. To complicate matters further, in the Indians' gymnasium there were six large, round, steel floor supports located in the playing court. The Indians would dash down the court, feint to go one direction, then clutch a post and swing off at an unexpected angle to elude their pursuers and, receive the ball at an unlooked for angle.”

The Alford brothers, Donald and Joseph, led KU with a combined 17 points. The Alford family’s roots run deep at KU. Legend has it that it that it was on their grandfather’s (Joseph Savage) farm that the Rock Chalk chant was first adopted by the KU Science Club. Their mother, Susan Savage Alford, was one of KU’s original students in 1866. A photograph of their brother, Alfred, was used as the model for the student in the “Uncle Jimmy” Green statue that stands before Lippincott Hall on KU’s campus.

A banquet was given after the game which both teams attended along with Haskell’s basketball team, victors over Nebraska the night before by a score of 79-29. The 50-point thrashing by Haskell was Nebraska’s worst ever loss until another trip to Lawrence resulted in a 56-point loss to Kansas and Wilt Chamberlain in 1958.

After another loss in 1903 KU got its only win in the first 7 games of the series. It was KU’s fourth game of a two week, 11 game road trip through Missouri, Nebraska, Iowa and Illinois. A rally was given that morning in the chapel on Nebraska’s campus. The KU team was invited to come up on the platform where they were given an ovation.

Forrest Allen, a freshman then known as “Fog”, scored 23 points, six more than Nebraska’s total. It was Allen’s third trip to Lincoln in a month’s time. He played for the Kansas City Athletic Club against Nebraska on January 13, scoring 7 points. On February 3, he accompanied Baker University team to Lincoln as their coach, losing to Nebraska 33-27.

Allen’s freshman teammate, Tommy Johnson, scored only two points in this game, but in years to come he would be a thorn in Nebraska‘s side, both on the basketball court and on the football field.

KU beat Nebraska 5 times that season, an NCAA record for most wins over an opponent in one season (matched only by KU’s 5 wins over Kansas State in 1935). Two games were scheduled to have been played in Lincoln on back to back nights but KU’s team arrived a day late so the first game was cancelled. KU had become snowbound and forced to spend a night in Union, Nebraska, forty miles east of Lincoln.

Forrest Allen was in his second year of coaching the Jayhawks. Only three years before he was “Fog” the star player. Now he was “Phog” and already becoming a renown coach.

At that time the conference was split into two divisions, Kansas winning the South division and Nebraska winning the North division. The conference champion was decided by a three-game play-off between the divisional winners at the end of the season. These games were played in Kansas City, KS at the Rainbow skating rink on Minnesota Avenue. KU won the first two games to claim the Missouri Valley Conference championship. To raise money for their athletic departments the teams decided to go ahead and play the third game, which Nebraska won in overtime. 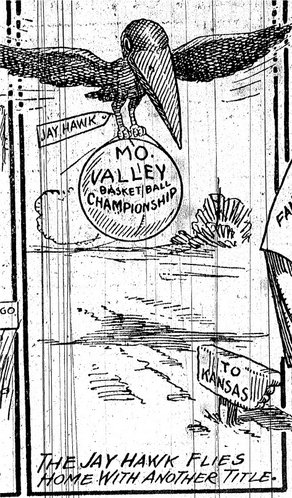 Tommy Johnson starred, scoring 42 of KU’s 81 points in the three games. One of Nebraska’s best players was Wilbur Wood, an excellent defenseman and the first black basketball player in conference history. 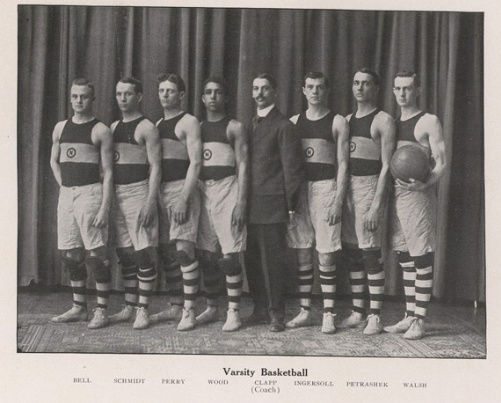 The officiating crew for the three game series have a place in Jayhawk lore. William Hamilton, the referee, became KU’s head coach a few months later. Henry Ashley, the umpire, was the captain of the Kansas City YMCA team which played KU in its first ever varsity game in 1899.

After this season KU finally led the overall series with eight wins to Nebraska’s seven. During Hamilton’s tenure Nebraska would regain the lead 21 wins to 19, but Phog Allen, who had become Dr. Allen, retook the coaching reins in 1920, won 10 straight over Nebraska and turned KU into a basketball power.

what do you mean by that.

This is brilliant. One of the best blogs ever written on this site (along with chris hauser's on don fambrough). Excellent read!