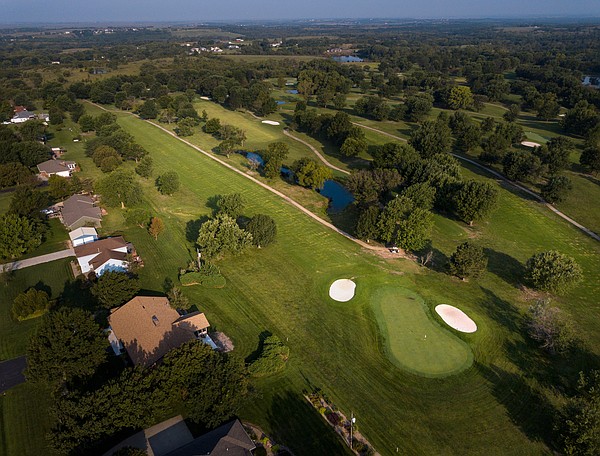 This long and straight par 5 in the back corner of the Western Hills Country Club course gets trickier as the hole plays out but offers golfers the opportunity to grip it and rip it to get to the green. by Nick Krug

The final challenge in my Tee Off With Tait adventure was a fun track in Topeka called Western Hills Country Club.

Different than just about every other course I played during my nine weeks of challenging tee shots, tough greens, intimidating hazards and beautiful scenery, the par-5 13th hole at Western Hills was a test of the most basic aspect of golf — how far can you hit it?

The coolest thing about this hole, despite its length, is the fact that there’s no reason whatsoever to be intimidated. Your tee shot is just as straight as it can be, the tee box is big and the fairway is wide open and your goal while standing over your first shot is simple — hit it as far as you can and as straight as you can.

It’s one that PGA golfer John Daly of “grip it and rip it” fame would absolutely love.

I did just that but wasn’t all the impressed with my drive. I think I tried to swing too hard and that broke down my mechanics and caused me to pop it up a little. It still went somewhere – 210-220 yards – and landed just in the right rough a little off the fairway, still 300 yards from the hole.

If you’re going to be right or left here, though, I think you’d rather be right. Less trouble, more space and an easier second shot await. 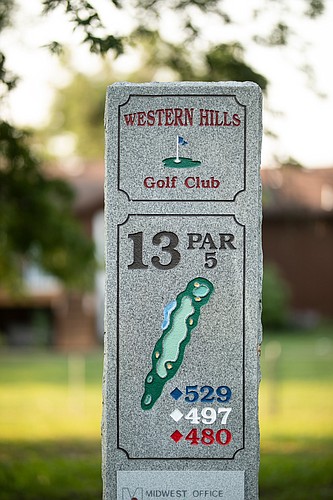 The only difference between my first shot and second shot was the tee. Standing over my second, the same thoughts played in my head – as long and straight as I can hit it.

My second shot wasn’t anything special either, but I advanced the ball up and through the fairway and had a decent angle into the green from left to right from about 150 yards out.

I can see why they call this a good birdie hole. After two pretty lousy shots, I found myself sitting one good shot away from having a run at birdie on a pretty easy green to read, hit and land on.

Unfortunately, it never came. My third shot traveled about 145 yards and landed in a flat, oversized bunker on the front right of the green. I finally hit a good shot again — a 6 iron to manage the wind in my face — but the wind still ate it up and kept it from reaching the green.

All things considered, it was a pretty easy shot out of the bunker, since it was so shallow, and with the flag in the back of the green, I had plenty of room to get out and let it run.

My bunker shot carried it about 15 yards but didn’t get quite far enough right and sloped back toward the middle of the green in front of the hole. That left a 14-foot putt for par and I finally drained one.

The nice, true greens that roll smooth had a lot to do with that and I finished the Tee Off With Tait challenge at 5-over, with five bogeys and four pars.

No disasters, no do-overs, not even really a hazard outside of the bunker at Western Hills, even though I saw plenty of them.

When I first reached the hole I wasn’t sure why it would have been picked as one of this course’s signature holes. But as I played it, its charm presented itself and No. 13 became more and more fun as I got closer to the green.

Three good, straight shots is all it takes to put yourself in birdie range and the beauty of this hole is even a bad shot or two in there won’t hurt you too bad.

To check out the long par 5 at Western Hills and see the rest of the track, book your tee time today before the weather takes a turn for the worse. And tell ’em Tait sent ya! 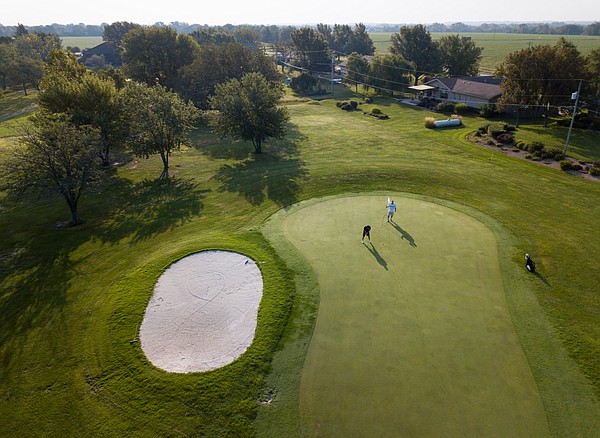 Be sure to enter this week for your chance to win a free round of golf at Western Hills Country Club.

Last week's winner of a round of golf at Lake Perry Country Club was Denise Birdsong. Congratulations!

This week's winner of a round of golf, at Western Hills Country Club was Elliott Teters. Congratulations!