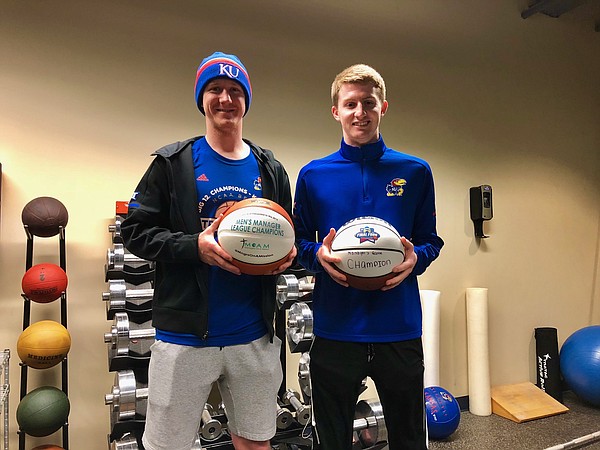 Kansas basketball senior managers Collin Cook, left, and Brayden Carroll, will work their final game in Allen Fieldhouse tonight when the Jayhawks take on Texas at 8 p.m. on ESPN. by Matt Tait

The goal of just about every college basketball player who steps foot in any college arena is to find a way to get to the Final Four.

And while the Kansas men's basketball team has fallen short of that dream despite coming oh-so-close during recent seasons, two Jayhawks who will be honored before their final games in Allen Fieldhouse at 8 p.m. tonight against Texas, actually achieved the feat in 2016.

They might not have NBA millions awaiting them and almost certainly are not household names adored by Kansas fans everywhere. But KU managers Brayden Carroll and Collin Cook are national champions. And they've got the ball to prove it.

This road to the Final Four featured an actual road, which carried six basketball managers piled into a Ford Expedition for an 18-hour adventure that will not soon be forgotten.

The story begins back in 2016, just days after top-seeded Kansas' heartbreaking Elite Eight loss to Villanova in Louisville.

Seeded No. 2 overall by Michigan State's KPI — named after founder Kevin Pauga, whose KPIsports.net web site ranks teams of managers to this day and only seems to be picking up steam — which ranks and brackets the ever-emerging amateur world of manager-on-manager basketball, Carroll, Cook and four of their closest friends and fellow-KU managers were slated to play in the manager bracket's first ever Final Four. One problem. The way these guys saw it, the actual Jayhawks were supposed to be there with them.

“Initially after we lost, none of us wanted to go,” recalled Carroll in a Sunday interview with the Journal-World. “We take the losses kind of hard, just like the team does, so nobody really wanted to go. But (the KPI guys) were like, 'Hey, you guys need to come to make this real,' and we wanted to help out and make sure this all went through.”

So one manager's father chartered the Expedition — and by chartered, we're talking Hertz and made a reservation — and the group piled in, unsure of what was ahead and unaware that they were destined to make history.

The 13-hour drive put them in Houston around 6 a.m. the next morning. Fortunately, one former KU manager was from the Houston area so the team was able to grab a quick nap and then head over to a local junior college gym for a quick walk-through and makeshift shoot-around. 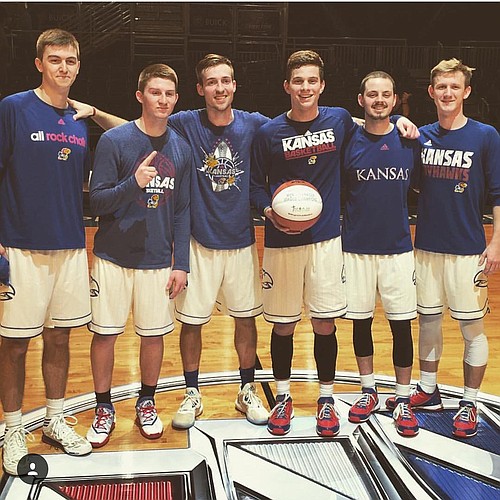 While these guys did not have Bill Self breathing down their necks and the pressure of the Big 12 title streak hanging in the balance, they all had been around the KU program long enough to experience a bit of osmosis when it came to playing the game. They might not have run “Fist” and “5-Up” and inbounds plays the same exact way that Frank Mason, Perry Ellis and the rest of the KU crew ran them. But the philosophies and things that mattered most were similar.

Extra passes. Tough defense. Ball movement. And playing in constant attack mode all were staples of the managers' style of play. And it proved to serve them well that week in Houston.

After knocking off Iowa State by about 20 points in the semifinals — the games were played at a convention center across the street from the site of the actual Final Four but featured real NCAA officials volunteering their time and regular college basketball rules — Carroll, Cook and crew were slated to face Michigan State in the first ever Manager Games national championship tilt.

Behind Cook's stellar night — “He basically won us that game,” Carroll said. “He hit so many 3s.” — the Jayhawks knocked off the Spartans to claim the first ever manager national title and were given an autographed basketball as a trophy.

After a postgame meal and brief celebration, the group hopped back in the rental and drove straight through the night, ending up in Lawrence a little more than 24 hours after they left.

“They gave us a little prize money for it,” Cook recalled. “But unfortunately all of it went to the rental car and gas to get home.”

They did also get that commemorative basketball, too, which officially documents their historic achievement. And while that relic probably won't wind up in the Booth Family Hall of Athletics at Allen Fieldhouse anytime soon, it will always mean something to Carroll, Cook and their teammates.

“We do take quite a bit of pride in the fact that we always do only play with managers,” Carroll beamed. “A lot of teams will play with guys who just got back from playing professionally overseas and stuff and we just use managers and that makes it a little more special to us.”

And earlier this season, in their only loss of their senior year to date — this year's KU managers are 4-1 heading into March, ranked No. 14 in the country of a whopping 171 teams being tracked at KPIsports.net — the Toledo team that beat them featured a player who played at Allen Fieldhouse just a few years ago and squared off against former KU phenom and future No. 1 overall pick Andrew Wiggins.

“Everybody else always plays with their GAs and video coordinators and stuff,” Cook said. “But (Jeremy) Case and (Brennan) Bechard don't play with us.”

Evidently, they don't need them to.

While all of the love tonight will go to KU seniors Devonte' Graham, Svi Mykhailiuk and Clay Young, keep an ear out for an announcement that features the names Carroll and Cook.

The moment will be brief, just like their Final Four experience was, and it will be sprinkled in with the names of the senior members of the spirit squad and the basketball pep band.

But no matter how brief or anonymous their moment might be, two national champions will be honored at Allen Fieldhouse tonight. The only question left to answer now is, when the current season is all wrapped up and everything is said and done in San Antonio, will Carroll and Cook be the only two?