Posts tagged with Keegan Vs. Tait

Despite having four picks different last week, Keegan and I wound up tied after missing two different games each.

Seeing how I correctly picked the KU game and he did not, I lobbied with the ethics board for a bonus game, but to no avail.

So that brings us to our second-to-last week of picks, still all knotted up. If things remain that way after Week 12 (or maybe even if they don't) we may have to break the tie via bowl-game picks, but, for now, we'll move forward as is.

Both of us are feeling a KU victory this week in Ames, Iowa, where the 3-7 Jayhawks take on the 1-9 Cyclones in an environment that figures to seem more fitting of two bowl teams than the ninth and 10th place squads in the Big 12 Conference.

Should be interesting to see what happens. While we wait for kickoff – 7 p.m. tonight at Jack Trice Stadium — here's a look at all of our picks.

Question: Now that Montell Cozart has taken over as KU's starting QB, it seems like a good time to ask which mobile, dual-threat-type quarterback is your favorite of all-time?

Answer: Because of the very nature of the position, I pretty much love all of these guys. From Michael Vick and Kordell Stewart to Vince Young and Robert Griffin III, I've always been fascinated by these guys' abilities to get something out of nothing, make throws that no one expects or thinks they can make and fill up highlight reels with mind-blowing runs and big-time plays. But of them all, one guy stands out above all others and it's a name I'd bet none of you are thinking of: Bradlee Van Pelt, Colorado State. During his days at CSU from 2001-03, Van Pelt was so talented, so dynamic and, best yet, so confident. Never one to shy away from sticking his head into trouble, Van Pelt always was the first guy to come up barking whether he had just had his bell rung or not. Those CSU teams were pretty good and Van Pelt was a big reason for it. His senior season, he came within a couple hundred yards of becoming the first college player to throw for 3,000 yards and run for 1,000 yards in the same season. In 2005, Texas' Vince Young achieved the feat, rushing for 1,050 and throwing for 3,036. 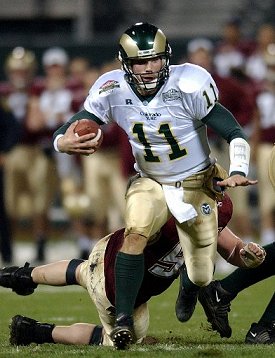 Answer: Built like a tight end, he ran like a wide receiver and it was so cold at his home games that you could see his breath every fast step of the way. As a minor league pitcher, he was wild but threw nearly 100 mph. After his minor-league manager was promoted to the majors, guy by the name of Tony LaRussa, the big lefty said nobody else believed in his baseball potential as much as LaRussa did. So Bobby Douglass stuck to football and stiff-armed his way to big runs. He threw the long ball well, but didn't know how to take anything off it, which led to some drops on short passes. I don't remember watching Douglass during his KU days, but he was one entertaining guy to watch playing for the Bears. 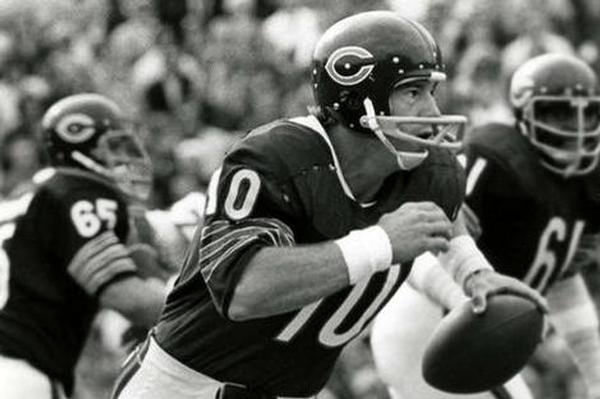 As much as I'd like to think of it as a display of my genius when it comes to picking college football games, it's more likely that it was karma that cost Tom Keegan this week.

A 9-1 week by me and a sub-par 6-4 showing by Keegan evened us up in the overall standings, with three weeks to go.

The karma comes from him posting a photo of me sleeping on our drive to Stillwater, Okla., last weekend. I was only out 30 minutes max and we had gotten only 4 or 5 hours of sleep the night before since we were covering the men's hoops opener late into the night. But, still, as I nodded off for the power nap I needed, Nick Krug and Keegan pulled their shenanigans and posted a picture of me, lights out, on both Twitter and Facebook.

Nothing wrong with the photo, of course. And, to be honest, it was pretty funny. But karma came through for me and now it's anybody's ball game as we head down the stretch.

Here's a look at this week's picks, where one of us was bold enough to pick the Jayhawks.

Question: Who wins this Sunday — the unbeaten Kansas City Chiefs or the 8-1 Denver Broncos?

Answer: Let's put it this way, if Peyton Manning's injured ankle was not in play, I'd pick the Broncos to blow the Chiefs out 38-13. But since it is, I'm going to go Broncos 35, Chiefs 19.

Answer: The Broncos' KU football connection will put them over the top against the Chiefs. I'm not 100 percent sure about this, but I think Broncos QB/OC Petyon Manning is the NFL's first player-coach since Tom Landry served as defensive back and defensive coordinator for the New York Giants nearly 60 years ago when Vince Lombardi was the defensive coordinator. Landry wore a helmet when he first started coaching, but switched to a fedora. The hat choice always looked more natural and fit better on Landry than on Lombardi. Fedora factories — or should we call them haberdasheries? — would have done well to sneak President John F. Kennedy a big wad of cash under the table to wear a fedora. The prez did not like wearing hats and when he was seen not wearing them, many others realized it was OK to stop wearing fedoras and they went out of stye. Now they're not customary, but are worn by some hipsters, perhaps because Johnny Depp has been known to wear them. Anyway, I digress. Back to JFK. I never believed any of the conspiracy theories and especially after watching a documentary with the late Peter Jennings serving as host, believed Lee Harvey Oswald was the lone gunman. But after watching JFK: The Smoking Gun on ReelzChannel, I'm not so sure. It's based on Bonar Menninger's book, "Mortal Error: The Shot That Killed JFK," which highlights the research of a Howard Donahue, who theorized that a secret service agent in the car behind JFK's, after hearing Oswald's shot, picked up a rifle, turned toward the depository and accidentally clipped off a shot that killed our most charismatic president. The documentary is definitely worth a watch. Let me know what you think. What was the question again?

Great. Keegan picked up another game on me in the standings and now I've gotta endure this 4-plus hour drive to Stillwater, Okla., with him talking about it the entire way.

Maybe I can get Nick Krug to man the radio and tune him out from time to time.

Tom's lead grows to three games — a huge margin based on how tight we've kept it so far — and, with three games different this week, we either will tighten up or see a bigger gap develop.

Although we've picked a few different, we're once again in agreement on the Kansas outcome, as we both have the Jayhawks losing but also covering the spread during today's 3 p.m. kickoff against Oklahoma State.

Here's a look at the rest of our picks:

Question: Because we were robbed and did not get to pick the Baylor-Oklahoma game this week on Thursday night, it's time to go with a related question: What's the best college football offense you can remember?

Answer: Two words. Charlie Ward. OK, those words probably should be Florida State, but, still, Ward was the guy that made the Seminoles go. The 1993 Heisman Trohpy winner was fantastic in leading FSU's high-powered attack, the kind that would run over you and run by you all at the same time. Ward's Heisman victory was the second biggest in history — not bad for a future NBA point guard — and, although his team did not put up college football's most points or yards or any of those things, they are the first offense about which I remember thinking, 'Man, it must be flat-out scary to play against them.' I should note here that, if this year's Baylor team were in the running, I'd easily pick them for this answer. What a machine.

Answer: My memory isn't what it used to be, but images are flashing into my head and maybe as they keep flashing, I'll remember the school, the players' names, the year. A short guy, not all that fast, but he's running all over the field and nobody can seem to catch him. Did he have 30 eyes that enabled him to see everything in every direction? It seemed that way. Or maybe he felt the earth moving and knew that meant defenders were on his way. Somehow, no matter how many bigger men surrounded him, he kept his eyes downfield, extending the play with is feet, waiting to see one of his receivers break open. What was his name? I see a No. 5 on his jersey. I see him throwing to No. 10, one play, to No. 80 the next. The uniforms were blue or white and there was a little red trim on them. There were two letters on the sides of the helmets. But I see the color orange as well. Not on their uniforms, but where? In a bowl, yes, in a crystal bowl held by a mustachioed smiling coach. I'm sorry. I just can't come up with the name of the school, the players, the coach, the year. But I see everything else so clearly.