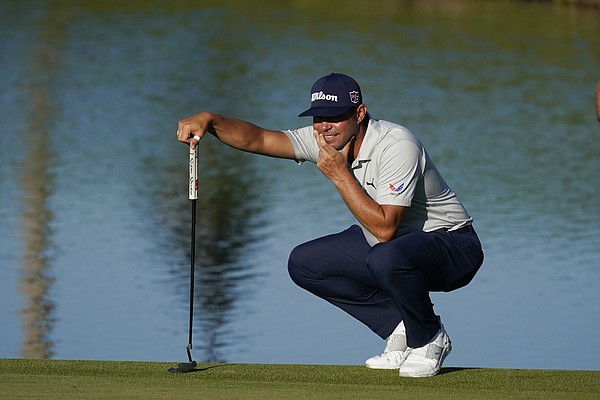 Gary Woodland, of the United States, lines up his putt on the 11th hole during the second round of the Mexico Open at Vidanta in Puerto Vallarta, Mexico, Friday, April 29, 2022. (AP Photo/Eduardo Verdugo) by Matt Tait

After starting his round with three bogeys in his first seven holes, former University of Kansas golf standout Gary Woodland recovered with three birdies in his final 11 holes to finish at even par (70) after one round at the PGA Championship on Thursday.

At the time he finished, Woodland was tied for 24th place at the star-studded major field.

Playing the back nine first, Woodland carded birdies at the par-4 17th hole, the par-4 4th hole and the par-5 5th hole. His birdie at No. 4 featured him draining a 23-foot putt. He followed that up by knocking it on the green in two shots at the fifth hole, and he cleaned up the birdie in two putts from there.

Woodland played with Englishman Lee Westwood and Italian Francesco Molinari on Thursday and that trio will be back out there for Round 2 on Friday.

Former Jayhawk Ryan Vermeer, a PGA professional in Nebraska, shot a 5-over 75 on Thursday, with six bogeys and one birdie. He played with American golfer Brian Harman and South African Oliver Bekker.

Woodland, who became the first Jayhawk to win a major in 2019, when he won the U.S. Open at Pebble Beach, finished tied for sixth at the PGA Championship one year earlier in 2018, marking his best performance at the event.

Former University of Kansas golfer Daniel Sutton fired his fourth consecutive round in the 60s on Sunday to take fourth place at the Korn Ferry Tour’s Price Cutter Charity Championship in Springfield, Mo.

Playing in the final group at Highland Springs Country Club, and starting the day three strokes behind Round 3 leader Brandon Wu, Sutton did what he had to do to catch Wu, firing a 3-under par 69 while Wu shot 2-over on Sunday.

But he could do nothing about the stellar Sunday turned in by champion Max McGreevy, who shot his second 64 of the week and took home the title at 21-under for the tournament.

Sutton, who played his final two seasons of college golf at KU after starting at Idaho, finished at 18-under for the week and took home $29,250 from his first Korn Ferry event of the season.

The Birmingham, England, native started the day with an eagle at No. 1 and carded two more birdies on the front nine to make the turn at 4-under.

But a bogey at 10 and another at 18 kept him on the fringe of contention throughout the morning.

Also on Sunday, Lawrence resident and fellow-former-Jayhawk, Chris Thompson, delivered by far his best round of the week, shooting a 6-under 66 to finish at 9-under for the tournament and in a tie for 44th place.

Thompson, who spent the 2018-19 season playing his rookie season on the PGA Tour, made the field through a Monday qualifier and will move forward looking to do the same at a handful of events in the months ahead.

Thompson, who carded seven birdies and one bogey on Sunday — including birdies on three of his first four holes of the day — netted $2,998 for his strong finish.

A pair of former University of Kansas golfers easily made the cut at the Korn Ferry Torn’s Price Cutter Charity Championship on Friday.

Birmingham, England native, Daniel Sutton, who played his final two seasons of college golf at KU, finished Friday in a tie for fifth place, three strokes off the lead at 11-under.

He carded six birdies and one bogey to shoot 67 at Highland Springs Country Club in Springfiled, Mo., one day after firing a 66 to jumpstart his round.

Former KU All-American Chris Thompson shot a 2-under 70 on Friday to move to 5-under for the tournament. He enters the weekend in a tie for 40th place.

Thompson’s second round was nearly mistake-free, as he carded two birdies — one on each side — and 16 pars.

Thompson, a Lawrence resident who competed in his first PGA Tour season during 2018-19 at age 42, reached this week’s event by finishing in the top three at a Monday qualifier.

Brandon Wu leads the Price Cutter tourney at 14-under after firing a blistering 9-under 63 on Friday. Wu's round included seven birdies and an eagle to go along with 10 pars.

He leads by one stroke over Michael Arnaud, who shot 66-65 in Rounds 1 and 2 to climb to the top of the leaderboard.