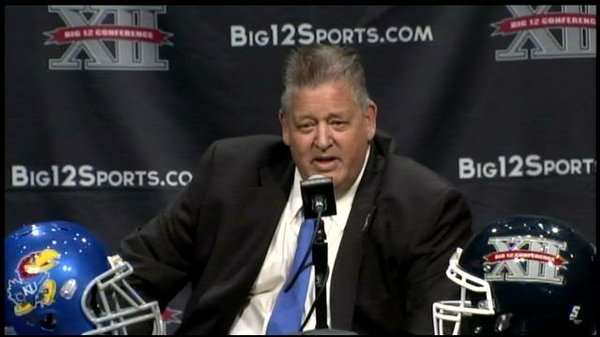 That's the prevailing thought from Day 1 of the 2013 Big 12 media days at the Omni Hotel as Day 2 gets going with five new teams stepping to the podium today. And, in a sense, Weis' Monday comments about enticing potential recruits to join the Kansas University project by asking them if they've “seen that pile of crap out there” has become the line to beat at the always interesting couple of days that kickoff each football season.

A quick Google search of the words “Charlie Weis pile of crap” produced more than 100 different links that in some way referenced or reacted to the comments that created a laugh in the Omni Ballroom and sent Twitter into a frenzy.

As has become fairly common, national media members lined up to take their shots at Weis for being his comments.

From Deadspin, which led with a fairly straightforward play-by-play of the popular quote:

“This is Charlie Weis we're talking about. He'll be back to bullying student reporters again before the end of September.”

From The Big Lead, which seemed a little more snarky in its reaction:

"Typical. Not coincidentally, that’s the exact same pitch undoubtedly deployed by coaches recruiting against Charlie Weis. Since, you know, this is college football and the coach is kind of responsible for the output on the field. Kansas State has brought in a lower ranked recruiting class than Kansas four of the past five years. They just won the nation’s second best league, with an even less touted “pile of crap.””

And from Yahoo, which evidently did not ask any of the four KU players in attendance how they felt about Weis' comments:

“What do Weis' current players think of this pitch? I can't imagine they're pleased with it, but I'm sure their coach's response would be "Stop playing like a pile of crap." Of course, the players might suggest the coaching improve a bit as well.”

By night's end Monday, Weis' comments had made their way to several national web sites and Twitter feeds. And that's to say nothing of the usual group of Big 12 scribes who chimed in on the soundbite — 475 media members were credentialed for this thing and dozens more kept an eye on it from a distance — or the fact that Weis' words made it to ESPN's SportsCenter by the end of the day.

Not bad for a Kansas football team that finished 1-11 in 2012 and can't do anything about erasing that for another six weeks.

And therein lies the motive for Weis' words. He was not trashing his team nor being unnecessarily cocky or crude. He was being honest, he was saying something he had told his team and local media members multiple times before Monday and he wasn't going to apologize for either.

"If people just listen to what you're saying, they usually don't misconstrue it,” said Weis, referring to the fact that the comments came after a stretch in which he had just pinpointed some of the good things KU has going for it. “Too many times — and let's not get into the Charlie Weis story, let's talk about Kansas, but let's be clear — too many times people have an impression without ever having met you. Never talk to you once in your life. I used that comment — 'Have you seen this pile of crap?' — and then someone out there has already written that I've given up on my team for this year. They've already put that out there. I mean, were you paying attention to a word I said? Why would you say something like that if you were paying attention at all?"

It's a fair question and one that Weis has gotten used to asking.

The part about this whole thing that people have yet to figure out is that he really doesn't care. Say what you will about Weis or his tactics or his personality or his brutal honesty, but don't mistake any of it for an act. Weis is who he is and, for the most players, his players love it.

That goes for most of his players from the past and that goes for the current KU players, too. None of the four in attendance Monday — Jake Heaps, Ben Heeney, Cassius Sendish, James Sims — had any issue at all about Weis' comments. In fact, each of them even went as far as to say they agreed and understood the point.

If the comments don't bother the players who they're made about, why do they bother everyone else?